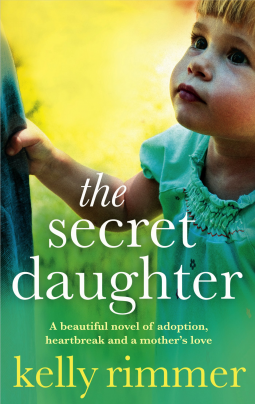 This was such a moving story, convincingly told. It is almost as though you are reading a memoir rather than a novel. Kelly Rimmer describes Sabina’s pain and confusion so well that you can completely understand how she must be feeling when she discovers, as an adult, she is adopted. Her anger and disappointment at her parents for keeping this secret from her is all too evident, particularly as she has recently discovered that she is pregnant. Like most women, she can’t understand how a mother could bear to give up her child. And when she suspects that her adoptive mother knows more than she is saying about her birth mother, her fury increases. She is determined to try to track her birth mother down but it is not easy. It was sad to see how her relationship with her adoptive parents changed.

It was Lilly’s letters that I found the most poignant though as she desperately tries to contact James so he can come and rescue her from the maternity home. Through these letters, the reader learns more about the forced adoptions which went on in Australia. I knew about this happening in Ireland, as it has been well documented, but didn’t know about Australia. Lilly’s strong love for her unborn child and bewilderment as she waits for James was heartrending to read about.

It was an interesting and unexpected part of the story when we begin to hear the story from Sabina’s adoptive mother Megan’s point of view. I had very mixed and changing emotions reading these chapters as I read about what Megan had done and to what extent she had been influenced by her husband.

This book raised a lot of issues surrounding adoption and how it affects all involved: birth parents, adoptive parents and the adopted child. It made me think about all the circumstances surrounding adoptions in years gone by and why things happened they way they did. Above although, the book is about how strong the love and bond between a parent and child can be. I thought this was a really compelling read and would definitely recommend it – another great read from Bookouture.

What the book’s about:

As I saw my new-born baby’s face for the first time I tried desperately to capture her face in my mind—to stamp it onto my eyelids. As she was taken from me I knew I might never see my daughter again.  37 years later…‘You were adopted’. Three short words and Sabina’s life fractures. There would forever be a Before those words, and an After.  Pregnant with her own child, Sabina can’t understand how a mother could abandon her daughter, or why her parents have kept the past a secret. Determined to find the woman who gave her away, what she discovers will change everything, not just for Sabina, but for the women who have loved her all these years.  From the bestselling author of Me Without You comes another touching, beautifully told story about the pain of separation and the enduring strength of love.

2 thoughts on “The Secret Daughter by Kelly Rimmer”