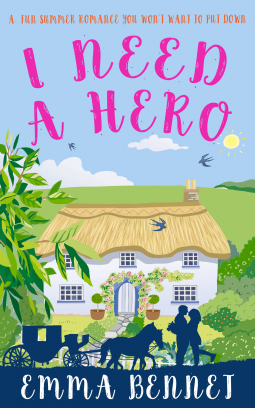 This was a light, quick and very entertaining read. Bronte, a romantic novelist, is holding out for Mr Right who will be just like the heroes in the novels she writes. When Ryan, a red haired dentist moves in next door, she immediately discounts a possible relationship with him. After all, whoever heard of a dentist being the hero! Now Sebastian, the son of the Lord of the nearby manor, clearly he’s much more hero material. The trouble is that he’s a bit dull and self-absorbed and he and Bronte don’t seem to have much in common. She gets on really well with Ryan and values his friendship. There’s an obvious attraction and bit electricity between them but she doesn’t think he is the one. To the reader, it’s clear where the real relationship lies but will Bronte see it?

I really liked all the references to classic literature in this from Bronte’s name, to her cat Mr Darcy and Sebastian riding up on a horse to rescue her just like Willoughby in Sense and Sensibility. In fact, there were definite echoes of that story in this book. Bronte’s high expectation of her perfect relationship reminded me of an article I read recently discussing whether romantic novels gave women unrealistic ideals when considering a relationship.

There was a part of the novel which, when I read it, I thought described Emma Bennet’s books perfectly: “she was good at what she did…people enjoyed them…they were light and warm….fun, full of life, humour and more than anything, love – love, the oldest and best story of them all.”  I would agree: this is a lively, warm and funny book, perfect when you want to read a sweet romance.

My thanks to the author for arranging a review copy. It was published as an ebook on 17th July by Joffe books and you can buy a copy here: I Need a Hero

What the book is about:

Romance writer Bronte Huntington has vowed she will never settle for anything less than ‘the one.’ When pleasant red-haired dentist Ryan moves in next door he just doesn’t fit the bill. They have plenty in common but Bronte wants nothing more than friendship with him. Then it looks like Bronte’s dreams have finally come true when dashing Sebastian Fairfax rescues her on his horse after she has an accident in the countryside around her idyllic little cottage. Sebastian is tall, dark, handsome, and heir to a massive country estate! But is Sebastian the one? Or will Bronte’s romantic dreams of the perfect hero turn out to be as fictional as her novels? And will Bronte’s temperamental cat ever stop getting in the way?!