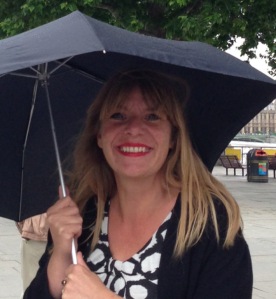 I’m pleased to have Suzie Tullett who has written a guest post for my blog today. Suzie is an author of contemporary humorous fiction and romantic comedy. As well as The Trouble with Words, her novels include Going Underground and Little White Lies and Butterflies, which was short-listed for The Guardian’s 2013 Not the Booker Prize. She has a Masters Degree in Television & Radio Scriptwriting and worked as a scriptwriter before becoming a full-time novelist. And when she’s not tapping away on the computer creating her own literary masterpiece, she usually has her head in someone else’s.

We novelists are often asked which authors and books have inspired us the most. Personally, I don’t think I could come up with a single name or individual title, probably because I have so many to choose from. After all, when I’m not busy writing my own magnus opus, I usually have my head in someone else’s.

Of course, it will come as no surprise to hear that, as a writer, I’ve always been an avid reader. From the Janet and John books I read as a tot, to Enid Blyton’s The Faraway Tree series, even as a child I loved being transported into someone else’s world.

Of course, as I grew older, these other worlds weren’t always magical or charming. As a young teenager, I only had to read Flowers in the Attic to realise that. Although it wasn’t just books like those in the V.C. Andrews Dollanganger series that both gripped and disturbed me, some of the classics had a similar impact. For example, I cried when I read Charles Dickens’ Oliver Twist, and Catherine’s ghost appearing at the window in Emily Bronte’s Wuthering Heights is still with me even now.

These days, however, you’ll probably find me reading something that makes me laugh. For example, the situational comedy in Nick Spalding’s Love From Both Sides had me snorting with laughter from start to finish and I couldn’t help but smile at the quirky characters in Liane Moriarty’s The Last Anniversary. I’m also guaranteed to enjoy anything written by Marian Keyes. I love her down to earth humour and admire the way she manages to combine both this and elements of romance with some quite serious subjects matters.

If I am in the market for a more serious read though, I have to admit I’m not averse to a good crime thriller. For example, Erica Spindler’s Dead Run had me turning its pages whilst also needing to periodically put it down. Which in this case was a good thing, after all, how else was I going to catch my breath. And when it came to Angelo Marcos’ The Artist, no way did I see that ending coming.

I suppose what I’m saying is, it isn’t necessarily certain authors and/or particular books that inspire me, it’s how a book has the ability to affect the reader that I find inspirational. In my view, books don’t just need to be entertaining, they should touch their readers in some way. Depending on the genre, be this through laughter, tears, fear, surprise or anger, even.

Of course, as an author myself, it would be nice to think I’ve had such an impact on my readers. Just like the aforementioned had an impact on me.

Opening out the deckchair, she plonked herself down in it. “So how’s your week been?” she asked. She paused, not that she really expected a reply, but it was nice to know he was listening if nothing else. “Mine’s not been too bad,” she continued. “The shop’s still doing okay. Oh, and your mum called round the other day.” Remembering the visit all too well, Annabel tried not to scowl. “She said to say hello.”

She reached down and dipped her hand into her bag again, this time pulling out a flask of coffee. “Caffeine, just what I need after the hassle of getting here,” she said. “As usual the traffic was horrendous.”

Pouring herself a drink, she knew her ramblings were an attempt at stalling the inevitable; that she was worried about Tom’s reaction once she’d told him what she was up to. While her plans for the future might be a positive move on her part, she certainly wasn’t daft enough to think everyone would understand. If anything most people wouldn’t, especially if his mother’s reaction had been anything to go by.

She thought it strange how everyone and their dog insisted she move on, yet the second she did they created such a song and dance over it. Although if Tom did choose to join in with the dissenters, then just like them he’d only have to get used to the idea; particularly when this was entirely his fault to begin with. Annabel didn’t want to play the blame game, but just like she’d said to his mother, she wouldn’t be in this position if he hadn’t upped and died in the first place. In her mind’s eye, she could see Tom sitting opposite, his hands clasped as he patiently waited for her to tell him what was really on her mind. The man always could read her like a book.

She took a couple of sips of coffee, determined to reveal all. But, in spite of practicing her speech all week, now that it came to it, those well-chosen words seemed to fail her. Resting her cup on her knee and refusing to let her conviction wane, she realised she was just going to have to come out and say it.

After three, she told herself. One, two, three…

She squeezed her eyes shut, in anticipation of the lightning bolt no doubt about to strike her down.