Mairi Wilson reading from the beginning of Ursula’s Secret

This cake tasted as good as it looked!

Last night I was lucky enough to attend the book launch for Ursula’s Secret by Mairi Wilson. It was a lovely evening and it was great to meet and chat with Mairi. I really enjoyed hearing her talk about how the book came about and the excitement of seeing her work published. I had heard Mairi read an extract from the book at Portobello Book Festival last month and was immediately intrigued by the story. It tells the story of Lexy who is reeling from a double bereavement. Her mother, Izzie, has been killed in a hit-and-run accident and her mother’s childhood guardian, Ursula, dies suddenly soon afterwards. Although Lexy hasn’t seen Ursula for some time, she was like a surrogate grandmother to her. As Lexy visits lawyers to find out about her inheritance and starts reading through some of Ursula’s papers, she discovers that Ursula had a whole life she knew nothing about. As she investigates further, she discovers that what she thought she knew about herself and her family may be in doubt. And though she doesn’t realise at first, her enquiries may mean that her life is in danger.

I loved this book and couldn’t put it down. I hadn’t actually read the synopsis of the book so along with Lexy was very surprised to discover that Ursula had connections in Malawi. In fact, this book takes you to several locations from London where Lexy was living, to Edinburgh and Ursula’s house, to Malawi where all the secrets began and to a house in a remote part of the Highlands of Scotland. I loved how the reader gradually begins to find out along with the bewildered Lexy, firstly that Ursula had a secret and then just how many secrets and lies there were! I liked Lexy’s impulsiveness as she decides to fly off to Malawi to try to find out more. I particularly enjoyed the memories of Evie, one of Ursula’s friends. I thought those historical scenes were fascinating, such a different time and place.

This book is filled with twist after twist, secret after secret which will keep you guessing right to the end. Looking back, the clues were all there and when it finally clicked with me what was happening, there were some very tense and dramatic moments as I read through the final chapters. I liked that the ending had, to some extent, been left open with, I hope, the possibility that we may find out more about the consequences of the secrets being revealed.

Ursula’s Secret was published by Black and White Publishing in paperback on 4th November 2015 and has been available as an ebook since 15th October. At the time of writing this post, the Kindle version is a bargain at only 98p. You can order copy here: Ursula’s Secret 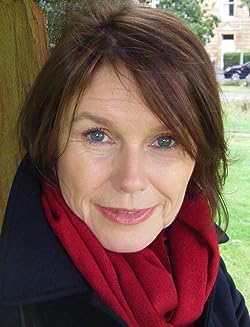 Mairi has kindly agreed to answer some questions about herself and her work so read on to find out more about her.

I’m mostly based in Edinburgh these days but still spend a lot of time back in the Highlands and, when I can, I love going to Spain. I lived in Madrid as a teenager and fell in love with it. Now, though, I tend to go to Andalusia. There’s a beautiful little village high up in the Alpurarra mountains called Ferreirola which is a favourite, largely because of the writers’ retreats that are held there at Casa Ana, but also because it is just so quiet and restful. I also like the city of Malaga – most people just head straight for the coastal resorts but the city is definitely worth a visit – and Cadiz is another great place to go.  (If the writing doesn’t work out, I’ll apply for a job with the Spanish Tourist Board.)

Reading. And possibly a youthful passion for the stage too, because when you’re writing from a character’s point of view you need to get inside their head and breathe their air in the same way as you do if you’re acting a part in a play. But it was reading that really inspired me. When you read you fill in the gaps and complete all the details the writer can’t possibly put down on the page so you are contributing to every story in a way that makes it your own. I remember being stunned when I read Michael Morpurgo’s Private Peaceful because I was convinced the characters came from the Scottish Highlands and discovered quite a long way through that they didn’t. The story had resonated with stories I’d heard from my own family so I’d painted in a background that reflected that. I try to remember to leave space in my own writing for readers to bring their experience to the story too because that’s what really makes a book come alive for me.

Ursula’s Secret wasn’t the first novel I’d started but I was determined it would be the first one I’d finish. After nearly  three years of working on it piecemeal, I’d gone away to Spain for two weeks to knit all the scenes and fragments into one cohesive whole. I came back with my first full draft and even though I knew it still had a long way to go, I submitted three chapters and a synopsis to the Sunday Mail Fiction Competition. I had no expectation of winning but every entry was going to be read by Black & White Publishing and so I hoped that it might give me a ‘way in’ at a later date. When I got the email to say my manuscript had been shortlisted I was ecstatic: objective achieved. I felt I’d already won so when I got the email a few weeks later telling me I really had won it was pretty hard to take in. I remember getting up several times that night to go back and re-read it just to be sure. Things moved quickly after that and now the book has been published. Amazing. I feel I’ve been incredibly lucky but I’ve still got a lot to learn so the next step is to find an agent who can help me develop as a writer and then we’ll see if I can get the next one published too…

Family, identity and birthright and what happens when your belief in that is shaken to the core.  In just a few heartbreaking days, Lexy Shaw’s world falls apart. After her mother is killed in a tragic hit-and-run, her mother’s childhood guardian, Ursula, also dies suddenly, leaving everything to Lexy. As she reads through Ursula’s hidden papers, what she discovers raises doubts about her family’s past and if she really is now all alone in the world. She follows the trail to Africa and stumbles into a story of lies and deceit that puts her own life in danger.

Yes. I don’t have a title yet but It’s about two friends who meet in Salamanca when they go there to learn Spanish, both hoping to leave difficult pasts behind. When one of them disappears, the other sets out to find her and gets caught up in an underworld of flamenco and revenge. I’m about halfway through but am in danger of stalling because I’m enjoying the research so much. This includes attending flamenco classes involving lots of stamping and attitude, and sampling a wide range of fine Spanish wines and tapas whenever I can.

That’s really hard! If I’ve enjoyed it, my ‘favourite’ book is usually the one I’ve just finished reading as it’s the one freshest in my mind. On that basis, it would have to be Sunjeev  Sahota’s The Year of the Runaways which I found compelling and horrifying in equal measure. It had that awful sense of foreboding that I felt when I read Kite Runner, and that I get every time I see a production of King Lear. I just want to shout at the characters ‘Don’t do it. Just don’t.‘ But they always do. Before reading that though, I think I would have said favourite this year so far was The Rosie Project by Graeme Simsion. Loved it.

I’m reading my way through this year’s Man Booker shortlist so have just started The Fishermen by Chigozie Obioma which is promising so far, and I’m also re-reading Jason Webster’s Duende as gentle research for my next novel.

Book whenever possible (but kindle for travelling), always bed and never bath (I hate the way the pages crinkle and warp with the damp), and evenings. I find it very hard to read during the day without feeling guilty that there’s probably something else I should be doing. But I’m working on that.

I’ve recently added Facebook and a website to my previous Twitter-only social media repertoire. You can find me on Twitter as @mairi_w,  on the web at www.mairiwilsonauthor.com and I’ve just set up as Mairi Wilson Author on Facebook here: page https://www.facebook.com/Mairi-Wilson-1639028853036099/ Make my day and ‘like’ me!

Probably predictable, but I read it young and early impressions tend to stick, so Jo Marsh from Louise May Alcott’s Little Women if we’re talking fiction – Jo’s a writer, fiercely independent, full of positive energy and things work out well for her in the end. Otherwise, if they hadn’t been colonialists, I’d be quite tempted by a couple of real life characters, Karen Blixen in Out of Africa, and Inés Suarez in Isabel Allende’s Inés of my Soul. I’d love to have that much courage. They were both fearless women who did astonishing things including taking on a conservative male establishment on their own terms. Fighting stuff!