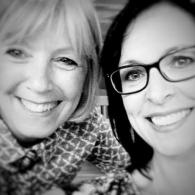 Today Nicky Black is my Author in the Spotlight – or should I say authors? I read Nicky’s book The Prodigal last year and thought it was excellent. You can read my review here: The Prodigal. It was published on 8th July 2015 and you can order a copy here.

Well, there are two of us that make up Nicky Black: me, Nicky Doherty, and Julie Blackie (do you see what we did there? J). I was brought up in rural Northumberland, and Julie is a born and bred Geordie from Newcastle. Julie is a scriptwriter and I’ve just been messing about with writing really until I started The Prodigal. I didn’t take it that seriously. Julie wrote for soaps for many years (Family Affairs, Doctors, Hollyoaks, Casualty) and now runs a very successful on-line fashion company with her daughter. I’m a Director and Deputy CEO at a not-for-profit company in London.  I live with my partner of 13 years with our two cats. Julie still lives in the Toon with her husband.

Julie inspired (or rather cajoled) me into writing. When I met her she had written a movie script, and she was writing for theatre. We became good friends at work and I started to edit her work. She liked my no nonsense red pen approach and thought I had a talent for spotting good writing. She kept telling me to enter competitions for short stories and monologues and I eventually did and came second a couple of times. I joined a New Writers’ programme at the Live Theatre and that was me…

Julie had been commissioned in around 1999-2000 to write the Prodigal as a two-part serial for ITV. After several years it never got green-lit and the producer who had championed it moved on. She then started writing full time for TV, I moved to London and The Prodigal languished with various producers. We both loved it and had worked hard on it for a long time. Eventually, as a passing comment, I said it would make a great novel. I’m a big reader (though I don’t get so much time these days) and I love nothing better than a book that I can’t put down, or a story that moves me. She’d just bought the rights back to the story from a production company and I remember her words to me: “Do what you like with it, Nicky, I’m sick of looking at it.” So I wrote the first chapter – she loved it, I loved it, and four years later, we published it.

I wrote in my spare time, went part time at work for six months when things were tough financially during the recession. I spent most of 2013 looking for an agent. Three were interested, but rejected it at the final hurdle. I kept refining it, over and over again until my eyes bled!  After I sent it off to an editor for a full structural report, the feedback was so positive, it really spurred me on to keep on refining and rewriting. Between Julie and a couple of critical friend readers, I got it into a shape that I knew was good enough.

Feedback from the copy editor and the proof reader bowled me over again, and so we decided to go straight to self publishing rather than go through the mill of finding an agent again. I’m pleased we did. It might not be a best seller (yet!) but I am totally in control of pretty much everything, which is wonderful for a control freak like me….

It’s about a detective called Lee Jamieson, who goes back to Newcastle after spending sixteen years in London. He meets and falls in love with the wife of a local villain called Micky Kelly. If he wants to be with Nicola Kelly, then he has to find a way of putting Micky behind bars for a very long time.

Absolutely, I’m not stopping now! When I met Julie she’d written a movie script called ‘Heads’ which is set in the Summer of Love 1989. It’s about a young man called Shaun Collins who wants to escape his life on the dole and working fiddle jobs. He and his mates organise illegal rave parties in warehouses, and he gets the chance to put on the rave of his life, and to make enough money to escape the crime ridden council estate, the loan sharks and the poverty. His nemisis, DCI Peach, a bitter, lonely copper on the wrong side of fifty, is on a moral crusade to rid the city of drugs, parties and all night dancing. He’ll do whatever it takes to stop Shaun achieving his dream.

We tried to get this made into a movie many years ago, and whilst we didn’t succeed, we did make this 4 minute tease which has stood the test of time:

I let you go by Clare Mackintosh.

Wonder by RJ Palacio. Am finding it a bit twee if I’m honest. I’m going to move onto the Tree Planter’s Wife or the Memory Book next.

Both. I read on my ipad in bed, but take books on holiday or I’m given them as gifts. Definitely evening.

I’ve been working on my website which I’ll be launching soon with a good old signed copy giveaway. Watch out for it, it’s proper belter.

Goodness, what a good question. I’m looking at my bookshelf right now and most of the characters have been through terrible hardship and trauma! Okay, I think I would like to be Mary Anne Singleton from the Tales of the City series by Armisted Maupin. She’s kind of an 80s Carrie Bradshaw, and it’s one of my favourite series of all time. And she got to wear kaftans and swan about San Francisco with all her GBFs.