Although I have heard many people talking about and praising Amanda Prowse’s books, this is the first I have read. It will not be the last. Amanda certainly knows how to write a story which packs an emotional punch. This book looks at the effects of alcoholism on Romilly and her family. It is a subject we hear about a lot in the news these days and unfortunately I am all too aware of just what an impact someone with alcohol problems can have, not just on themselves but on their wider family and friends.  It is not until you come across this issue personally that you realise how many other families are affected by the same problems. Amanda has written a very accurate portrayal of the devastating effects of alcoholism.

Romilly seems to have it all. She’s a bright, articulate, high-flying scientist with a responsible job. Married to David, they have a beautiful house in a sought after area of Bristol. They have a much loved daughter Celeste and life is good. However much Romilly loves her family though, she has another love: alcohol. What started as a drink or two to relax or boost her confidence has turned into a serious addiction that she seems powerless to resist. Watching Romilly making the wrong decisions time and time again was very difficult to read. Like many people with alcohol problems, she is in denial. She’s not like the alcoholics drinking in the streets and parks, dirty, smelly and abusive to people walking by. The typical pattern of an alcoholic starts to emerge, the lying, the deceit, hiding alcohol in the house and hiding the evidence afterwards. As I read and got to know Romilly, I felt I wanted to step into the book and help. But someone like Romilly needs to want to help herself and for all the periods of sobriety that she manages, you just know that she is going to slip spectacularly again.

Amanda Prowse has portrayed so well the devastating effects of Romilly’s drinking on David and Celeste. David loved Romilly so much and covered for her again and again. I think this is very common as people find it very difficult to talk about alcoholism. It is seen very much as a choice and people don’t sympathise as they might with a more recognisable medical condition. It is only when Celeste begins become frightened of her mother and aware that something is very wrong, that David in despair gives up on Romilly, realising when he gives her a stark choice that he cannot compete with her other love.

Most of the story tells Romilly’s journey from a young student through the early years of her marriage and motherhood and follows her descent into alcoholism. Interspersed with this story are chapters written by Celeste when she is older, looking back. Each chapter by Celeste gives an insight into how as a child she perceived each incident with her mother and were heartbreaking to read. How could Romilly – or anyone – do this to her child?

This book gives an honest and revealing insight into life with and as an alcoholic. It is very moving and a compelling read despite the difficult subject matter and there are uplifting moments. It may just make you think twice about having that glass of wine after work or in front of the television. It shows clearly how anyone could easily slip into the habits that lead to alcohol dependency. Perhaps after reading this book, readers will be more aware of the devastating effects alcoholism can have and may be more conscious of the warning signs in themselves or others.

I would like express to my huge thanks to Simeon and Amanda Prowse for offering me a copy of this book to review. Another Love, published by Head of Zeus, is available now as an e-book here and will be published in hardback in February then in paperback on July 14th this year. 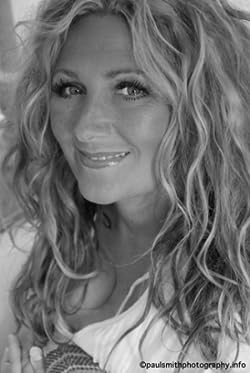 Amanda has always obsessively crafted short stories and scribbled notes for potential books. Six years ago, she quit her job as a management consultant and began writing full time. Her first book, Poppy Day is a contemporary novel following an army wife whose incredible love for her husband gives her the courage to set out to rescue him after he was taken hostage in Afghanistan. Originally self-published in October 2011, Poppy Day quickly became a bestseller and Amanda joined the prestigious Head of Zeus publishing house.

The second in the No Greater Love series, ‘What Have I Done?’ was an eBook sensation where women worldwide identified with the theme of domestic abuse in middle class households and it was subsequently voted a ‘Best Book of 2013’ by Amazon Kindle. Amanda followed this by joining the team of the ITV This Morning show as their resident author in 2013.

All of Amanda’s books in the No Greater Love series share one common theme – the main characters are ordinary women who find themselves in extraordinary situations where their strength, resourcefulness and determination is tested to their very limits.

Amanda’s ambition is to create stories that keep people from turning the bedside lamp off at night, great characters that ensure you take every step with them and tales that fill your head so you can’t possibly read another book until the memory fades…

Another Love – from the back of the book

In the early years, she was happy. Romilly had worked hard for her stunning, modern house in one of Bristol’s most fashionable suburbs. She adored her gorgeous, gap-toothed daughter and her kind and handsome husband. Sure, life was sometimes exhausting – but nothing that a large glass of wine at the end of the day couldn’t fix.

But then, as deep-buried insecurities surfaced, everything started to unravel. A glass of wine became a bottle; one bottle became two. Once, Romilly’s family were everything to her. Now, after years of hiding the drinking, she must finally admit that she has found another love…

One thought on “Another Love by Amanda Prowse”