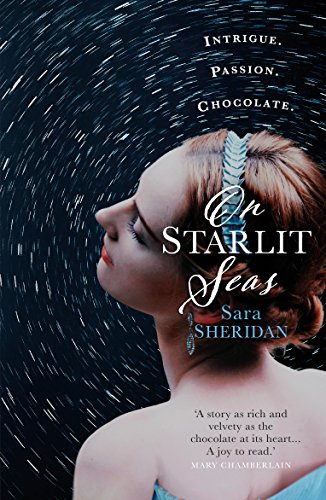 When I was asked by Black & White Publishing if I’d like to read a story which had chocolate at its heart I was hardly going to say no. When the book arrived beautifully wrapped and with a rather lovely looking bar of chocolate I was even more pleased that I agreed to review it! On Starlit Seas gives a fascinating glimpse into the world of chocolate trading and smuggling in the 1820s in a richly detailed story.

One of the main characters is Maria Graham, the widow of a ship’s captain, who has lived in Chile and Brazil and is making her way home to England. Most unusually for the time, she is travelling alone. Even more unusually, she is very independent and a published author. At a time of unrest in the Americas, there are few ships to make her journey on and she travels on the Bittersweet, which is under the command of Captain James Henderson. The Bittersweet is carrying a cargo of chocolate and, unknown to the captain initially, one particular bar of chocolate is worth rather more than he realised. As Maria and James become acquainted on the long sea journey, an attraction grows between them but social convention dictates this is an impossible relationship. Add in a group of gentlemen (and I lose the word loosely!) involved in a smuggling ring under the cover of a bridge club, the seedy underworld of London and you have a epic tale of adventure and love.

It was the author’s attention to detail which first struck me as I was reading. In the first few chapters we are taken deep into the Brazilian jungle and on to the bustling port of Natal. Sara Sheridan made the heat, dirt and danger of the jungle feel all too real and brought the busy port to life. I could easily imagine the port where the fishermen sang as they mended nets, the juicy fresh mangoes were tasted and trade deals were negotiated. Sara Sheridan was just as skilled at describing life on board ship and the dangers found in London where outwardly respectable wood-panelled clubs hid underhand and dangerous dealings.

Maria Graham is a fascinating character, not least because she was a real person. You can read more about her here (though I can’t of course vouch for Wikipedia being 100% accurate). She published several books about her travels and in this novel is bringing two more manuscripts to her publisher in London. This was at a time when women’s opinions and intelligence was not valued or even recognised by the majority of men. Maria was prevented from speaking to The Royal Society about her discovery of a way to measure earthquakes “The prattling of ladies, even ladies who travel, is not of interest to the Society’s members. We are serious fellows. Ladies, sir, lower the tone.”  Maria herself seems to have had exacting standards and would not read the ‘frothy’ works of Austen “unless she was ill”, preferring scientific works. These same standards meant she still felt bound to certain conventions and, although attracted to Captain Henderson, would not contemplate a relationship as he would have been beneath her. Partly though, I feel this was as she would feel, as a married woman, she would lose the independence she so valued.

I haven’t even touched upon the chocolate business part of the story where we read about more familiar names such as the Fry family, or what was happening with the gentlemen of the bridge club, or much about Captain Henderson who is an important character in his own right. As you can see, there’s a lot going on in this book. It’s a book to lose yourself in as you enter a world of smuggling, chocolate, adventure and love in the 1820s.

Thanks to Laura at Black & White Publishing for my review copy. On Starlit Seas was published on 28th July in paperback and as an ebook. You can order a copy here: On Starlit Seas.

Celebrated writer and historian Maria Graham must make the treacherous voyage from Brazil to London to deliver her latest book to her publisher. Having come to terms with the loss of her beloved husband, Maria now has renewed hope for the future and is determined to live her life as she pleases, free from the smothering constraints of Georgian society.

For a woman travelling alone it’s a journey fraught with danger, and as civil war rages around her, the only ship prepared to take Maria belongs to roguish smuggler Captain James Henderson. Onboard, all is well until Maria makes two shocking discoveries – the first a deadly secret, the second an irresistible attraction to the enigmatic captain.

With Henderson on a journey of his own and determined to finally put his life of crime behind him, he and Maria grow ever closer. But can Henderson escape his illicit past or will the scandalous secret he’s hiding ruin them both?

On Starlit Seas is a breathtaking and compelling story of passion, secrets and escape.

7 thoughts on “On Starlit Seas by Sara Sheridan”