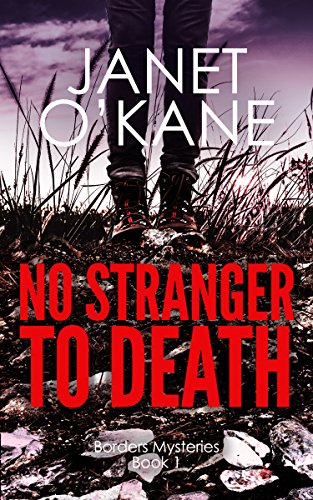 As a doctor, Zoe Moreland is certainly no stranger to death as the title of this book says. However, even she is unprepared for finding a body under the smouldering remains of a Guy Fawkes night bonfire. Clearly the body didn’t get there by chance and another unexpected death, followed closely by Zoe being involved in a suspicious car accident, suggests further foul play. Zoe had recently moved to the Scottish Borders following the death of her husband and had thought it would be a peaceful area for her to deal with her feelings following her bereavement. Involved in the investigation, however unwillingly, she begins to find out all kinds of secrets being concealed by the villagers with the help of her friend Kate. Kate is deaf and her lip-reading skills prove very useful. It seems the more the two friends find out, the more danger Zoe could be in.

I really enjoyed this book, finding the protagonist Zoe, a very engaging character. Although it was a murder investigation and the police were obviously involved, it was Zoe who was the main focus and who uncovered most of the secrets. The story unfolded well as Zoe began to find out the many secrets almost all the villagers seemed to be keeping. Being a GP meant Zoe was in a position to find out things about her patients that even the police couldn’t find out – but with confidentiality issues, how much could she actually reveal? In this small rural community where you’d think everyone would know everything about  everyone else, it was amazing just what people was hiding. Zoe too had issues she was keeping to herself and it’s not until later in the book that she finally opens up to her friend Kate. The friendship between the two women was well written as Zoe began to be more trusting of Kate and their friendship grew stronger. There were plenty of twists in the book, keeping the reader engaged in the plot. So many of the villagers would appear to have had motive to be involved in the crimes and Janet O’Kane skilfully makes her reader suspicious of so many of them.

I must admit to being rather surprised when what was really going on was revealed. I’d never have guessed in a million years and yet, with hindsight, there were some subtle hints throughout the novel. The final chapter ended the book in a very intriguing way meaning that I will of course have to read the sequel! A well paced, satisfying crime thriller with strong characters who I look forward to meeting again in the lovely Borders setting. Although the beautiful Borders countryside does not seem so peaceful after reading this book!

My thanks to the author for giving me a copy of her book. No Stranger to Death was published in December 2013 and is available in both paperback and e-book editions. The e-book is currently only 99p and well worth it. You can order a copy here: No Stranger to Death

A Scottish village. A burning corpse. And a doctor who must discover who’s killing her patients before she becomes the next victim. Recently-widowed GP Zoe Moreland has moved from an English city to the Scottish Borders countryside for a fresh start among strangers unaware of her tragic past. But her hopes for a quiet life are dashed by her discovery of a woman’s body in the remains of a Guy Fawkes bonfire. Although the last thing Zoe wants is to get caught up in a murder investigation, this changes when someone else dies unexpectedly and she herself narrowly escapes death. Determined not to become the killer’s next victim, she digs beneath the tranquil surface of the close-knit community to find out who is committing these horrible acts. And discovers that some secrets can be deadly.