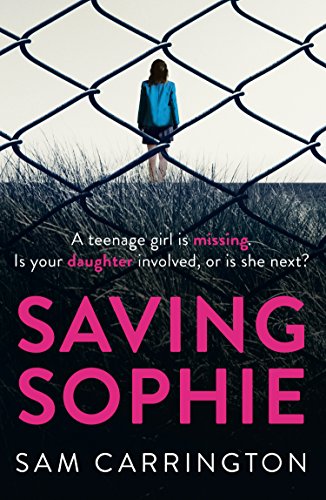 I’ve got a great guest post from debut author Sam Carrington today looking at who she’d cast in a film of Saving Sophie. You’ll find that after my review. If you’ve read the book, let me know if you agree with her choices or who you would cast instead.

Saving Sophie is a very tense read, especially if you are mother to teenage girls as I am. Seventeen year old Sophie is brought home drunk early one evening by the police and after sleeping it off, is unable to remember anything at all the next morning, not even that the police brought her home. Her father is angry but her mum, Karen, suspects that there is more to the situation than simply a case of underage drinking. During the course of the following day, it becomes apparent that one of Sophie’s friends, Amy, who was out with her hasn’t returned home and no-one can contact her. The police begin to investigate and before long the body of a young woman is found.

Sophie annoyed me at first as she seemed very stroppy and unco-operative with her parents and the police. She just didn’t seem that bothered that her friend was missing or at all concerned that she had been in such a state that she had no memory of the night. If she had been my daughter, I would have been furious with her. However, as the story went on Sophie begins to have vague memories of what might have happened and begins receiving very worrying emails containing disturbing photos. I began to realise that the poor girl was terrified and scared that the details of the photos might get out and developed a bit more sympathy for her.

Sophie’s mother Karen was an interesting character. Following an attack two years ago, she has become severely agoraphobic. Although it’s not, thankfully, something I have experience of, I thought that Sam Carrington portrayed her condition really well. Her fear when trying to leave her house was almost palpable. It’s hard to imagine that someone could be so scared of being outside that they are unable even to go to their best friend to comfort them after tragedy strikes, but reading about Karen’s physical response was very believable. Karen begins to suspect that not only is Sophie keeping something from her but also that she may in danger and that danger is linked to a secret she herself has been keeping. By this point I was almost shouting at her and Sophie to GO TO THE POLICE!! I would have liked to have seen more of the investigating office DI Lindsey Wade throughout the book as I feel she was a really interesting character but played quite a minor role. I was pleased to read the the back of the book that she is to feature in Sam Carrington’s next book to hopefully, I’ll get to know her a bit better in that.

With its short punchy chapters, Saving Sophie moves along at a really fast pace and becomes real edge-of-the-seat, nailbiting stuff by the end. And what an ending! I am usually pretty hopeless at guessing what might happen in a psychological thriller but the ending of this was a massive surprise!  It made for quite an uncomfortable read at times, particularly as a parent, as it makes you think about how well you know your children as they grow more independent. But it’s not only parents who will enjoy this book I’m sure, it just perhaps adds another dimension to your reading if you are. Saving Sophie is an excellent debut novel which mixes themes of secrets, lies, phobias and family dynamics brilliantly.

Thanks to Helena at publishers Harper Collins (Avon) for my review copy. Saving Sophie was published as an e-book on 12th August though you’ll need to wait until December for the paperback version. The e-book is currently only 99p and you can order a copy here: Saving Sophie

Guest post – If Saving Sophie made it onto the screen …

The book has been written – I’ve lived with the characters who are in Saving Sophie for the best part of a year – so if the unthinkable was to happen (ok, not the unthinkable, because I’m obviously thinking about it now, but if the dream was to come true…) who would be the ideal actors to fill the shoes of Sophie, Karen, and DI Wade if Saving Sophie was to be adapted for TV or film?

When I began the writing process – which started off in my head: bits of characters swimming around until they were formed well-enough to write their bios – I had already given them traits, quirks, likes and dislikes. I had also given them a physical appearance. It felt a bit like the dress-up paper doll I had as a child, where you had numerous pieces of card depicting hair styles and colour, clothes and accessories to make up different people (well, all female for that particular game, but you know what I mean). Creating characters is a bit like generating a Photo-Fit – and through this process of adding layer upon layer, the characters of Sophie, Karen and DI Wade took shape.

But in addition to this, I think I was influenced by TV: favourite actors, or characters from films, and so once I’d finished writing Saving Sophie, I had a fair idea of who I thought would make each of my main characters truly come alive.

The easiest to visualise for me, was Karen Finch. As a mother who shares some of the fears Karen had about her daughter’s safety when out at night, I also related to her the most. When I was writing about her, I was really seeing her and there is one actress in particular that I adore who I feel would be perfect at playing the over-anxious, agoraphobic mum – and that’s Olivia Colman.

Her diversity as an actress, her ability to put her all into a role and add a fabulous depth to her characters, her intelligence and likeability – all appeal to me. She’s a fierce talent! (And I think I love her). Her character in the British crime drama, Broadchurch, where she plays DS Ellie Miller. alongside the grumpy DI Alec Hardy, (played by David Tennant), is genius.

For DI Lindsay Wade, there are a couple of actresses I think could easily fill the role. One is Zoe Telford, who I saw play DCI Jane De Freitas in a couple of episodes of Silent Witness.

Another is the brilliant actress, Kelly Reilly. She played, among other roles, DI Anna Travis in the series Above Suspicion and Mary Watson in Sherlock Holmes: A Game of Shadows.

Either of these actresses would be a good fit for Lindsay Wade and certainly match how I envisage her: a strong, gritty, intelligent and edgy character.

And as for Sophie Finch – well, thinking of someone who could fill her shoes is a trickier task. Perhaps as people read about her, an actress might spring to mind. I’ll be interested to find out! I’ve wracked my brain and thought about the films I’ve enjoyed with young, up-coming actresses and in terms of talent I think Saoirse Ronan would be excellent.

She’s a tad older than Sophie, but age doesn’t tend to stop people playing younger characters! Her portrayal of Susie Salmon in The Lovely Bones left me in awe. Obviously that was some years ago now, but she’s since been nominated for an Oscar for her recent film, Brooklyn. She has a beautiful Irish accent, but I know she also takes on different accents and pulls them off brilliantly – would love to hear her do a West Country accent!

It’s great fun thinking about who would play the characters you’ve created.

A teenage girl is missing. Is your daughter involved, or is she next?

Your daughter is in danger. But can you trust her?

When Karen Finch’s seventeen-year-old daughter Sophie arrives home after a night out, drunk and accompanied by police officers, no one is smiling the morning after. But Sophie remembers nothing about how she got into such a state.

Twelve hours later, Sophie’s friend Amy has still not returned home. Then the body of a young woman is found.

Karen is sure that Sophie knows more than she is letting on. But Karen has her own demons to fight. She struggles to go beyond her own door without a panic attack.

As she becomes convinced that Sophie is not only involved but also in danger, Karen must confront her own anxieties to stop whoever killed one young girl moving on to another – Sophie.

A taut psychological thriller, perfect for fans of The Girl on the Train and I Let You Go.