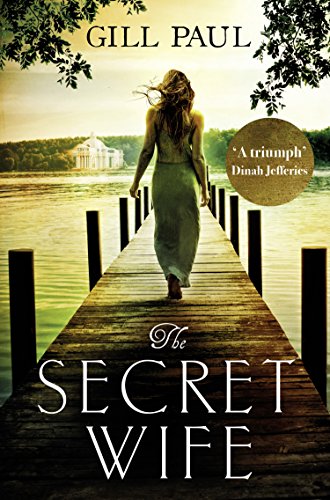 This is a book which had me totally enthralled. The Secret Wife draws on historical facts to weave a wonderful love story. Gill Paul has imagined what might have happened if one of the Russian Romanov family escaped the slaughter in 1918 and lived the rest of their life quietly and secretly. Tatiana was one of the Romanov daughters and in her surviving journals mentioned an officer, Dmitri Malama. By the way she writes of him, she was clearly very fond of him and her mother, Tsarina Alexandra, wrote that “he would make an excellent son-in-law'”.  Inspired by their possible romance, Gill Paul has written an epic tale of their love and how Tatiana might have been spared death. In the book she imagines that the lovers were separated after the Bolshevik revolution, neither knowing if the other was alive but both still loving each other deeply. In the present day, Kitty has inherited a cabin in the American wilderness from a great grandfather she had never heard of and begins to investigate his mysterious past.

I genuinely could not put this book down and read it over the course of a couple of days. I was totally captivated by the love affair between Dmitri and Tatiana and how they continued to love each other against the odds. I didn’t know much about the Romanov family except that they had been murdered and that there had been much speculation afterwards about whether any of them could have escaped. Gill Paul worked the historical facts effortlessly into her narrative so that I felt I learned a lot about the Russia of this era while reading. Initially, Kitty in the present day didn’t seem to have as much a part in the story but gradually her life and her investigation started to take a more prominent role as she uncovers more through her research into her mysterious great grandfather. She had gone to America following a betrayal at home and felt she needed to be completely alone to process her feelings. Discovering her great grandfather’s story helped her come to terms with her own life.

The Secret Wife is a book which has clearly been very well researched, giving such an evocative picture of time and place and of what life in Russia was like during WW1. It is beautifully written with characters who feel completely real, whether they are fictional or have their basis in a historical figure. The emotional story is romantic and exciting, moving and tragic, and ultimately satisfying. The kind of satisfying which may leave you with a lump in your throat. This is the first book I have read by Gill Paul but I will definitely be looking at her back catalogue and for future novels.

Thanks to Helena at Avon Books for my review copy. The Secret Wife was published on 25th August in paperback and as an e-book. The Kindle version is only 99p at the time of writing so if you love sweeping love stories against a historical background, take the opportunity to buy this at such a great price. You can order it here: The Secret Wife

Russia is on the brink of collapse, and the Romanov family faces a terrifyingly uncertain future. Grand Duchess Tatiana has fallen in love with cavalry officer Dmitri, but events take a catastrophic turn, placing their romance – and their lives – in danger . . .

Kitty Fisher escapes to her great-grandfather’s remote cabin in America, after a devastating revelation makes her flee London. There, on the shores of Lake Akanabee, she discovers the spectacular jewelled pendant that will lead her to a long-buried family secret . . .

Haunting, moving and beautifully written, The Secret Wife effortlessly crosses centuries, as past merges with present in an unforgettable story of love, loss and resilience.

4 thoughts on “The Secret Wife by Gill Paul @GillPaulAuthor #review”