I’m sharing a few thoughts today about the events I’ve been to over the past few days.

Wednesday was a glorious day in Edinburgh and it was lovely to be able to sit in the gardens in the sunshine between events. I began the day listening to Kit de Waal, author of My Name is Leon and Simon van Booy, talking about his latest book Father’s Day I haven’t read anything by Simon van Booy before, although this book sounded like one I would enjoy, but I did read and love My Name is Leon earlier this year (review here) Both books have children as their protagonists and the authors were asked if they found writing the voice of a child natural or difficult. Simon van Booy says he prefers to write children’s characters as in his own mind, he hasn’t grown up! Kit de Waal said she is childish so that helps. To enable her to get a real sense of a child’s point of view, she physically crouched down to get a child’s perspective on the world. She pointed out you don’t see many faces at that level. I was particularly impressed that both writers have used their success to help other aspiring writers. Simon van Booy founded Writers for Children which helps children to gain confidence in their writing. He is also involved with Reach – a college programme aimed at adults in poorer communities. Kit De Waal used some of her advance from her publisher to set up a scholarship for a creative writing MA at Birkbeck, University of London.

My next event was to hear Ruby Wax was talking about her latest book on mindfulness, A Mindfulness Guide for the Frazzled. She says she’s an expert at being frazzled! Although probably best known for her comedy and tv work, she has an OBE for services to mental health as well as a Masters degree in mindfulness based cognitive therapy from Oxford University. She explained that these days we are very highly stimulated by  technology and social media and that our minds are just not equipped to deal with so much information. They are in a high state of arousal and the hormonal response to stress is to send cortisol and adrenaline round the body. Mindfulness aims to bring the mind back to a calmer state. She had the audience do a short mindfulness exercise showing us how to focus on one sense at a time. She says its simple but not easy – like doing sit-ups, you have to practice everyday to get better. It was a really interesting session as well as being, as you would imagine, very funny too.

Thursday was not as lovely a day with an Edinburgh mist hanging over the city making everywhere feel rather cold! I did have three events to brighten the day though as well as meeting up with Karen from @orendabooks which was great. My first event of the day was to see Louis de Bernieres, pictured above reading from his latest poetry collection, Of Love and Desire This is a collection of poems written over his lifetime and focussing, of course, on love. He had brought his last poetry collection along by mistake so was relieved that the chair, Viv Groskop, had the correct book! He read a few poems from the collection including a few about or set on beaches. He explained that he lives near the sea so beaches are an inspiration and feature a lot. I was particularly taken by one poem he read called For Sylvie, Who Believed In Reincarnation. This was written after hearing of the death of a former student of his. Although a short poem, I was impressed at how much story I could deduce, as much from what wasn’t said as what was. He said that he doesn’t make decisions to write poems ‘they just turn up’ and that he always has a notebook to jot down ideas. He read a poem he had written just the previous evening  called ‘Dreamer on Princes Street’. Asked about his proudest achievement he said it’s the book Birds Without Wings which is a fictionalised history of the Ottoman Empire. He said it was his attempt at writing an epic like War and Peace and is very proud that it is used in Turkish schools and universities. I was pleased to hear that he has many more plans for his writing including two more novels in The Dust That Falls from Dreams trilogy. 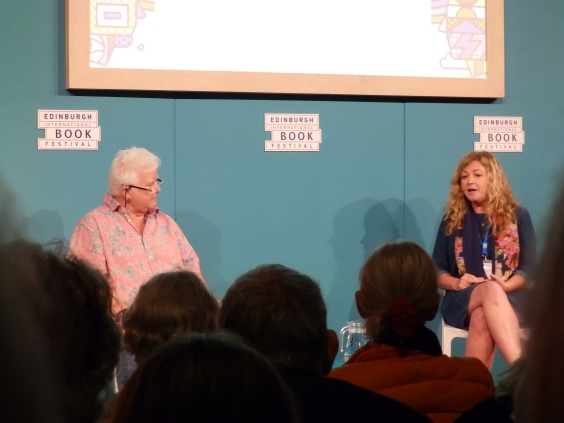 After lunch and time to read in the Spiegeltent, I went to hear Kate Summerscale chat with Val McDermid about her latest book The Wicked Boy. I have to confess that her The Suspicions of Mr Whicher has been languishing on my Kindle for some time but I will get to it sometime! Val McDermid explained that Kate’s book are narrative non-fiction, true history brought to life. She said of this book that it read like a novel which she just couldn’t put down and urged the audience several times to buy it! The Wicked Boy tells the story of Robert Coombes who murdered his mother in 1895. He spent several years in Broadmoor and when released, moved to Australia where he volunteered for the Australian Imperial Forces, served at Gallipoli and was awarded a medal for his bravery. I was fascinated to hear about the research involved in this book from looking at online records, to old newspapers, records from the trial and even travelling to Australia to interview living relatives of some of the people included in the book. I really must get around to reading Mr Whicher and definitely like the sound of this newest book too. 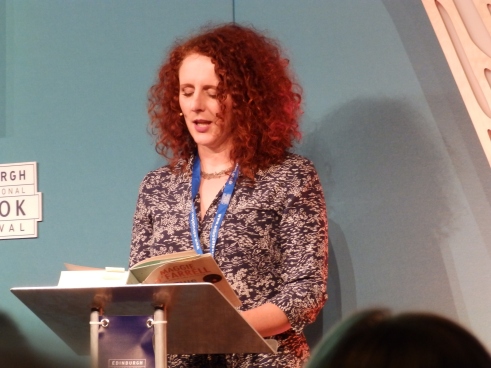 Last stop for the day was meeting up with a friend to see Maggie O’Farrell – we are both huge fans! She was talking about her latest book This Must Be The Place which I read earlier this year (review here) I was really interested to hear about the inspiration for this book. She was in a cafe in London when she realised that a very famous film star was also there. Everyone was staring at her and there were photographers outside. They happened to visit the toilets at the same time and the actress looked exhausted (she was pregnant) and very upset. Maggie O’Farrell said she would have asked anyone else if they were okay but felt she couldn’t do that with the actress being so fanous. It made her wonder what it must be like to be so famous and that if it was her, she’d be tempted to just walk away from it all. She didn’t say who the actress was, saying it would be another intrusion on her privacy. Another inspiration was hearing a radio interview which, after it was finished, the presenter said had been recorded some years previously and the speaker had died shortly afterwards. She wondered about someone listening who may have known the person but not known she had died. If you have read the book, you will know how these ideas made it into the story in very important ways. She also told a very funny story about her daughter who was around 18 months. This is quite a complex novel in its structure and Maggie O’Farrell had a huge pinboard with lots of post-it notes tracking her characters at different times. Her daughter came up to her with a colourful bundle of paper one day and sad ‘all gone’. She had taken off all the sticky-notes. As she said, she literally ‘lost the plot’ that day! It was a really great session as Maggie O’Farrell is always interesting to listen to. She says she finds people endlessly fascinating and is always observing and writing down things they say or do. Never tell a writer anything – you may end up in their book!