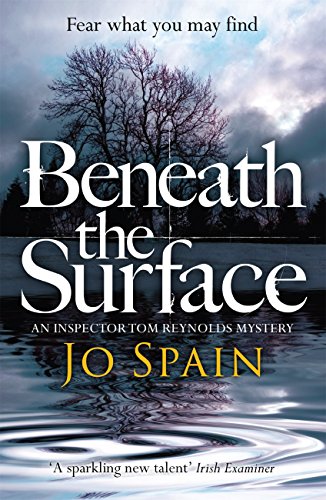 Beneath the Surface is the second book to feature Inspector Tom Reynolds and his team and this time we find him investigating a shocking murder at the Leinster House, seat of the Irish Parliament. The victim, Ryan Finnegan, leaves behind a baby daughter and a grieving widow who can’t understand why anyone would want to hurt her husband, who had only just returned to work following a serious car crash. Ryan also leaves a trail of clues gradually uncovered by Tom and his team and leading them to discover corruption and scandal in very high places.

This was another gripping read from Jo Spain. Tom is central again of course but I felt I got to know his team a lot better throughout the course of the book, especially  Ray and Laura. It will be interesting to see how the dynamics between the team develop in future books. (There will be more books won’t there Jo?) Tensions between Tom and his wife Louise and daughter Maria came to the fore in this book. It makes such a refreshing change to have a police story where the lead character has a relatively normal home-life. I could completely understand Louise’s frustration at so often taking second place to her husband’s job and was glad she seemed to have made him understand this. I am slightly concerned though that Tom’s response was to talk about retirement. Not yet please Tom, I’m just getting to know you! It also seemed natural that Louise’s frustrations spilled out into her trying to control Maria’s routine with baby Cait. I think anyone who has had a baby will recognise that feeling when well-meaning relatives offer ‘advice’!

Turning to the crime element of this book, there was so much going on just beneath the surface for the characters both politically and personally. It was a enthralling read as the team worked together to try to discover who the murderer was but also discovered so much more as potential motives were revealed. Jo Spain cleverly led my thoughts from one suspect to another throughout the book. I partly guessed who was responsible for once (usually I haven’t a clue) though did not fully guess the reasons why. But as Reynolds found, the clues were there in what the characters were saying, and not saying, all along.

The book ends with a very intriguing epilogue featuring one of the politicians who appeared in the book. He had seemed to be squeaky clean but this epilogue showed him to appear rather more devious and certainly with his own agenda. Perhaps this is setting up nicely for the next Inspector Reynolds book? I do hope so!

My thanks to the author and her publishers for giving me a copy of this book to review. Beneath the Surface was published by Quercus on 8th September as an e-book with the paperback due to follow in June next year. You can order a copy here: Beneath the Surface

Did I know it would come to this? That I was playing Russian Roulette? I would give anything to turn back time and to be with my girls. There is no shot at redemption. I am going to die. The gun is in my eye-line as the second bullet is fired. That’s the one that kills me.

Late at night, two powerful men meet in a secret location to discuss a long nurtured plan about to come to fruition. One is desperate to know there is nothing standing in their way – the other assures him everything is taken care of. Hours later, a high-ranking government official called Ryan Finnegan is brutally slain in the most secure building in Ireland – Leinster House, the seat of parliament. Inspector Tom Reynolds and his team are called in to uncover the truth behind the murder.

At first, all the evidence hints at a politically motivated crime, until a surprise discovery takes the investigation in a dramatically different direction. Suddenly the motive for murder has got a lot more personal. . . but who benefits the most from Ryan’s death?