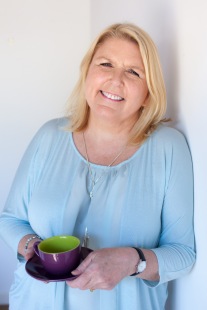 I’m delighted to welcome Christina Banach to the blog today. I had the pleasure of meeting Christina at a gathering of authors and bloggers in Edinburgh in June so it’s lovely to find out more about her through her answers. Her novel, Minty, was published in 2014 and has amazing reviews on Amazon. I have a copy so watch out for my review in the next few weeks. You can order a copy online here: Minty

Hi Christina, thanks for taking part. First of all, would you tell me a little about yourself?

I’m a writer and former Headteacher living in the Kingdom of Fife, Scotland, with my husband and two rescue dogs. I write young adult/crossover fiction. Amongst the things I love are: writing (obviously!); spending time with my family and friends; being curled up with a good book; indulging in great food (not always in moderation!); being on or near the sea; chilling in front of the TV; going for long walks; and nights out at the theatre. Oh – and I’m a bit of a chocoholic! My debut novel, Minty, was a Scottish Book Trust Teen’s Book of the Month, shortlisted for the SCBWI Crystal Kite Award and nominated for a Cybils Award.

Although I’d written stories, poems etc in childhood and throughout my teens, it wasn’t until many years later that I began to write seriously. The catalyst for this was a prolonged period of ill-health, coupled with a turbulent time in my personal life. I guess I turned to writing as a way of making sense of my reactions to these events. It was at that point that the writing bug held me in its grip and wouldn’t let go.

Once I rediscovered my childhood passion for writing it consumed me. However, it was increasingly difficult to find the time to devote to it so I took a leap of faith and resigned from my job. At that point my major focus was on writing adult fiction. Then I came across David Almond’s beautiful novel, Skellig, which inspired me to write for young people.

Meantime I devoured as much fiction as possible, in order to study how other writers constructed their books. I also pored over writing advice from authors such as James Scott Bell (his books are so useful!), Christopher Vogler, Robert McKee, Stephen King and Christopher Brooker; in fact, every book on the craft of writing I could lay my hands on. I made notes, cogitated, digested and applied what I’d learned. I joined SCBWI (the Society of Children’s Book Writers and Illustrators). I also surfed the Net for anything that would make me a better writer – there are so many great writing blogs online. When I sent work to a literary consultancy, for editorial feedback, they offered to sell me through to agents (they’re also literary scouts). It was through them I signed with my agent and, shortly afterwards I was offered a book deal with Three Hares Publishing. 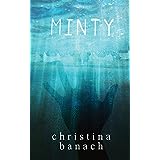 My book, Minty, is set in Fife and is a contemporary ghost story, told from the point of view of the ghost. It has described it as a cross between The Lovely Bones (without the grim murder!) and Ghost. I’m told that it’s a real weepy that has heart and warmth at its core. It tells the story of fourteen-year-old twins Minty and Jess who, although they sometimes bicker, are completely inseparable. Then a day trip to the coast puts their bond in jeopardy. As Minty tries to rescue her dog from drowning she ends up fighting for her life, a fight that results in drastic consequences for both sisters.

The title came to me in a flash, along with the idea. During the night I thought I sensed my late father’s presence, after which, unable to get back to sleep, I sat in the sunroom contemplating what had actually happened. Whilst doing this I heard my dog panting and put out my hand to stroke her. Until it struck me – how could it be my pet? She’d died the month before.

That’s when Minty’s name and her story came to me: the tale of a teenaged girl to whom the unimaginable happens. One that deals with universal themes such as love, family, grief, hope and redemption, but that also attempts to answer one of the big questions in life, namely, what happens to us after we die?

I spent a large part of Minty’s publication day in my pyjamas answering the phone (to real-life people wishing me well, not folks trying to sell me PPI!) and replying to congratulatory messages online. It was such a wonderfully crazy day – people were incredibly kind and lovely – and seeing Minty published was a dream come to fruition, so it’s one that I’ll never forget. By the way, I did manage to get out of those PJs and get showered in time for a celebratory dinner, complete with champagne!

Yes, I’m working on the fourth draft of Coira, a young adult mystery set in the legendary village of Glencoe in the Scottish Highlands. It’s a complex and ambitious story which has involved a lot of research but one with which I’ve completely fallen in love.

This is such a devilish question, Joanne! I’ve read several great books lately and it’s impossible to choose just one – thank goodness you’ve allowed me three! Here they are, in no particular order: Jon Teckman’s hilarious Ordinary Joe, The Dust That Falls From Dreams by Louise de Bernieres and Beetle Boy by M G Leonard.

As of now, September 2016, I’m just about to start Mesmeris by Karen E Coles. It’s a young adult novel that has garnered great reviews from readers of all ages – I can’t wait to delve into it.

On a rare Internet-free holiday it’s all of the above. Under normal circumstances, however, I do most of my reading when I go to bed at night. I prefer a paperback as I have slightly arthritic hands which can make holding a hardback a wee bit tricky. Although my preference is for a physical book I do own and use a Kindle, mainly because I don’t want to disturb my husband when I want to read on into the night. This means that I now have several virtual and real copies of the same book!

No question about it, I would be Scout Finch from Harper Lee’s, To Kill a Mockingbird. Why? Ah that’s easy; it’s because Scout’s father, Atticus, is one of my heroes so it would be amazing to spend time with him.

3 thoughts on “Christina Banach – Author in the Spotlight @ChristinaBanach”