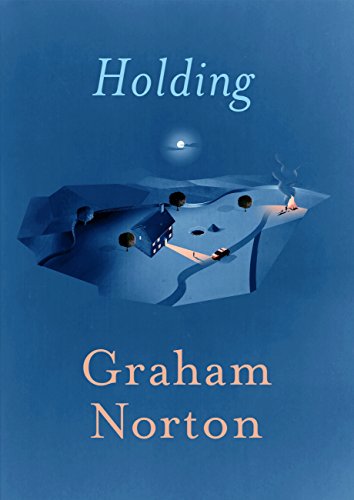 Holding is the debut novel by well known tv and radio personality Graham Norton. I think he is a naturally funny guy and really enjoy his Friday Night chat show and Saturday morning Radio 2 programme. And of course, his hilarious commentary on Eurovision is not to be missed! So you’d expect a novel by Mr Norton to be full of laughs and larger than life characters a bit like himself right? Wrong! Holding is essentially a gentle mystery story set in the sleepy Irish village of Duneen, where the residents are about to be shaken by the news that human remains have been found on a building site.

Graham Norton has created some wonderful characters to populate his village. There’s PJ, the overweight Garda who rarely has much to do and wonders if he will be able to solve the mystery of who lies buried in the town. Mrs Meaney, his housekeeper, has lived with a secret shame all her life and thinks she knows something about the grisly discovery. Brid Riordan is in a very unhappy marriage and seeks consolation in the many bottles of wine she has stashed in her fridge. The Ross sisters have been tinged with the tragedy of their parents’ deaths and live together quietly in the family home.

I thoroughly enjoyed this book. It has a distinctively Irish voice with some gentle humour apparent throughout the story. As the guilty secrets of the villagers begin to emerge along with plenty of rumours, finger pointing and gossip, the reader begins to understand more about the complex relationships between the characters. Graham Norton shows how dashed hopes, past losses and a deep-rooted need for love has affected his characters throughout the years.

Holding is a hugely enjoyable read which had me turning the pages late into the evening to see how it would end. There are some surprisingly moving parts of the novel and it would be hard not to have sympathy for the characters and what they have gone through. One in particular I felt so sad for but of course, I’m not saying who or why! I really hope that Graham Norton may write again about some of his characters as I’d really like to know what happens next for them. He has certainly shown in this novel that as well as being a talented entertainer, he knows how to tell an excellent story too.

My thanks to the publishers, Hodder & Stoughton, for allowing me to read a review copy via Netgalley. Holding will be published in hardback and as an e-book on 6th October, with the paperback due to follow next July. You can order a copy online here: Holding

So when human remains are discovered on an old farm, suspected to be that of Tommy Burke – a former­ love of both Brid and Evelyn – the village’s dark past begins to unravel. As the frustrated PJ struggles to solve a genuine case for the first time in his life, he unearths a community’s worth of anger and resentments, secrets and regret.

Darkly comic, touching and at times profoundly sad. Graham Norton employs his acerbic wit to breathe life into a host of loveable characters, and explore – with searing honesty – the complexities and contradictions that make us human.