Today I welcome Book Connectors author Tom Williams to the blog. You will find buying links to all his books at the bottom of the page. Thanks for taking part. First of all, would you tell me a little about yourself?

I have written reports and market analyses and business guides and all sorts of boring things for many years, but now the mortgage is paid off I can do what I’ve always wanted to and write fiction.

I was in Borneo and I learned something about James Brooke, the first White Rajah of Sarawak. I thought his was an amazing story and that one day I would like to tell it.

A very, very long time ago, I decided to take time out and try to write about James Brooke. I spent months researching him. (This was so long ago that research involved going to libraries and museums and reading actual books printed on paper.) Then, when I knew far too much about him, I sat down to write the Great British Novel.

It was much easier to get an agent in those days, and I got serious interest from a very well-known man who sent me off to work with an editor. I had no idea how lucky I was and when it didn’t seem to be working out, I gave up. The editor had told me I seemed to be getting stuck and should rest it for a while, so I did.

In the end, I rested it for about 30 years. The book that I eventually wrote (The White Rajah) was very different from my first attempt. I had forgotten most of what I’ve learned about James Brooke, which I think was an advantage, as it gave me more freedom to write fiction rather than to produce a lightly fictionalised biography. There’s no doubt that this second attempt was a much better book, but word processors and the internet meant that everyone was an author by now and finding representation was massively harder. Even so, I got an agent eventually, and the agent pitched my book to several major publishers, all of whom turned it down. They suggested I should write something more commercial and come back to The White Rajah (which is a bit heavy for a first novel) once I was established. So I started on something more commercial (which was eventually published as Burke in the Land of Silver) but my agent didn’t approve of it because it was set in Argentina and he said that books set in South America don’t sell. (He was right.)

By now I was so fed up with the whole thing that when a tiny American publisher, JMS Books, offered to take on The White Rajah I was thrilled and so they published it. While it hardly set the world on fire, it did sell enough for them to ask for a sequel, which became Cawnpore. Meanwhile, I carried on working on my South American book and Accent Press eventually bought that and took over The White Rajah, publishing a new edition.

This is a long story, but probably worth telling as many people think that you can write a wonderful novel and see it in print and selling thousands a few months later. Of course, that does happen, but my journey is probably more typical. 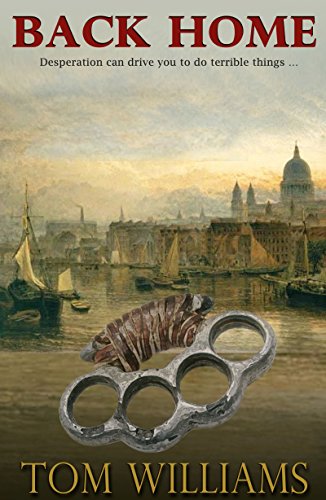 The White Rajah told the story of James broke through the eyes of his gay lover, John Williamson. In Cawnpore, Williamson travels to India and is caught up in the Indian mutiny. Williamson is an unusual hero for a neo-Victorian novel. Being working class by origin and homosexual by inclination, he is doubly alien to the world of colonial administration that he moves in. The result is that, while accepting that it is right and proper that Britain should rule over half the world, Williamson is never entirely comfortable with his situation as one of the ruling class. My last book, Back Home, finds him back in London where he discovers that the struggle between the powerful and the powerless is every bit as ruthless and bloody on the streets of Covent Garden as it is in the Far East.

Williamson has spent his life travelling around the world. The third book brings him full circle to his origins. Back Home was an obvious choice.

We had a launch party on my birthday. I am an enthusiastic tango dance so the club where I dance gave me space to launch the book early in the evening and then we danced and celebrated my birthday until the licensing laws meant they had to throw us out. There are photos on my blog: http://thewhiterajah.blogspot.co.uk/2016/04/launch.html

I’m writing another book in the series about James Burke. He’s a spy during the Napoleonic wars and I’ve had him thwart the French in Argentina and Egypt before playing a crucial role at Waterloo. Now I’m going back to earlier in the war and he is fighting in Spain

I finally got around to Sarah Waters’ Fingersmith earlier this year and I was blown away by it. For anyone who writes about Victorian London, Waters sets the standard we should all aspire to.

I always have several books on the go – including some I suspect I may never finish. (I’ve been reading À la recherche du temps perdu for years and am still stuck near the beginning of Book Three.) I’m reading bits of Napier’s history of the Peninsular War for research; a novel by Nell Peters because I’ve met her and I like her rather quirky take on the world; The Vanishing by Sophia Tobin, because I was given an ARC and it seems rude not to, although I am not that impressed so far; and there seem to be a few other books lying around waiting for me to pick them up again.

Mainly kindle, though I’m happy with both. I shower more often than I bath these days, which has considerably cut back on reading time. I read on public transport a lot.

I blog about once a week at http://thewhiterajah.blogspot.co.uk/. Posts are mainly 19th century history or things about the joys of research and writing, but there’s a certain amount of random stuff like posts about tango.  My Facebook author page is https://www.facebook.com/AuthorTomWilliams and I tweet as @TomCW99

As a child, my father introduced me to Leslie Charteris’ ‘Saint’ books. Charteris’ hero, Simon Templar, is a Robin Hood who steals from the rich and gives to the poor (less his 10% commission). Written in the days before widespread jet travel, Templar lived an impossibly glamorous life, staying in luxurious hotels, meeting beautiful women and dining in the best restaurants before facing off against evil villains who he always defeated in a fair fight. Charteris is said to have based the character on his own life, so I can only assume he was a very lucky man indeed. Who wouldn’t want to be Simon Templar? (Or the beautiful Patricia, who shared his early adventures.)

Here are links to the published stories about John Williamson.

And here are the stories about James Burke.

Burke in the Land of Silver: myBook.to/LandofSilver

Burke and the Bedouin: mybook.to/Bedouin