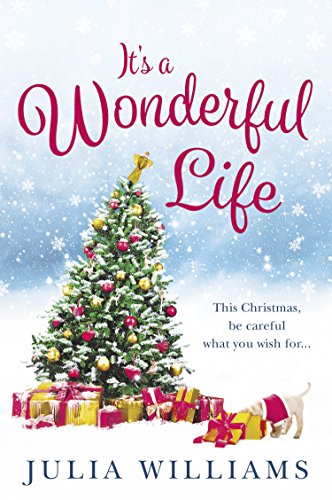 A very happy publication day to Julia Williams whose Christmas book It’s A Wonderful Life is out today in paperback and e-book. (Buying links below.) Yes I know it’s still more than seven weeks until Christmas but I don’t want to review all the lovely Christmas reads the week before, not leaving you enough time to decide what you want to read!

I was never going to be able to resist a book called It’s A Wonderful Life. The film of the same name is not just my favourite Christmas film but my favourite film ever! In the film, George Bailey, played by James Stewart, gets the chance to see what the world would have been like had he never existed. In this book, it’s not exactly like that but the theme of being discontent with life and wondering ‘what if’ is explored, particularly through one of the main characters Beth King.

Beth is an author and illustrator of children’s picture books and is currently working on a Christmas book, The Littlest Angel. She got married to Daniel when they were quite young and they have a happy marriage. He is just about to start a new, stressful job as a head teacher at a local school and they don’t seem to have much time to spend together. They have two teenage children, Sam and Megan, who are testing their parents’ patience as only teenagers can. The story begins at Christmas when the family are going, as always, to Beth’s parents. Daniel does not have a good relationship with his own father and loves the whole big noisy family thing. Beth’s sister Lou is trying to work out how to explain to everyone that her partner Jo is not in fact a man as she has let them believe. So there is already a lot of stress in that situation when Beth’s parents drop a bombshell. It is no wonder that a few weeks later, when she bumps into her old flame, Jack, and discovers they will be working together, that she muses about what would have happened had they stayed together. And begins to wonder if getting together is a possibility now….

I really enjoyed this book, which is the first of Julia Williams’ novels I have read. She fills her story with warmth and with characters and situations which I think everyone will be able to identify with to some extent. It has a beautiful Christmassy cover but don’t let that fool you. The story begins at Christmas and ends the following Christmas but there is a whole year of family life in-between. Telling the story from three different points of view – Beth’s, Lou’s and Daniel’s – gave a rounded picture of what was happening in the family throughout the year and the opportunity to really get inside the heads of the characters.

This a book about taking chances, giving second chances, appreciating what you have, and doing what is right for you to make you happy. Just like George Bailey in the film, Beth comes to realise what she has really is a wonderful life and all that she wanted. A gorgeous, heart-warming read which is perfect for Christmas but not just for Christmas. A lovely book to read at any time of the year.

The Christmas Day routine in our family never varies. Mum and Dad come back from church at ten thirty – some years if I’ve been nagged enough I join them – and we go round for drinks at eleven – Dad always believes in opening the bubbly early. Mum has usually been up since six am slaving over the turkey so we can eat promptly at one pm, making sure we have plenty of time for lunch before the Queen’s Speech, after which Dad makes us all sing the national anthem. Depending on the levels of drunkenness (in which mum disapprovingly doesn’t take part) this is either hilarious or excruciating. After that it’s a free-for-all with presents , and we collapse in front of the TV till Mum starts producing turkey sandwiches and Christmas Cake. By this time Dad, Daniel and my brother Ged will have usually managed to demolish a bottle of port between them before dad insists its time for Christmas charades , the bit of Christmas day which I absolutely loathe. Everyone else always gets into the swing of it, but I’ve always hated it, ever since I was little. Dad gets really involved: I blame the fact that his job in insurance always suppressed his creativity, so he insists on letting rip at home. I hate standing up in front of other people and performing; I always find charades a massive trial. Maybe that’s why I’m an artist. I prefer to channel my creativity from behind an easel. Growing up hasn’t made it any more fun. I long for a charades-free Christmas, but I won’t be getting it any time soon.

Christmas with the family. Cosy, relaxing…and a total nightmare?

Driving home for Christmas, Beth has everything she wants. The kids and the house, the career and the husband. So why is it that when the New Year comes, she can’t stop thinking about her old college boyfriend?

Her husband Daniel is tasked with bringing a struggling school up to scratch, but when family life catches up to him, can he be a good father and a good teacher at the same time?

Beth’s sister Lou has just been dumped…again. Single and childless, she can’t help but be jealous of her sibling’s success. But is the grass really always greener?

It’s a Wonderful Life is a heart-warming novel about the lives that could have been, and what happens when you start to question the choices you made…