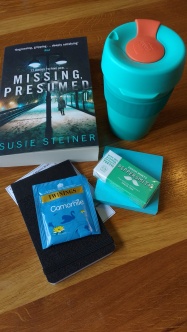 A few weeks ago I received this unexpected and rather intriguing package from Borough Press. Along with the book, there were several items which would be handy for a detective: a notebook, post-it notes, a coffee cup, mints and a relaxing camomile tea bag. All of these, the accompanying note suggested, would give a snapshot into the life of the protagonist of Missing, Presumed DS Manon Bradshaw.

Manon is a fascinating character. She is a detective sergeant working on a case where a young woman has vanished from her house, leaving behind her phone, keys and car, some blood traces and an open door. It is clear that something untoward has happened but Manon and her team are struggling to find any trace of Edith. The first 72 hours in a missing persons enquiry are apparently the most important and after that, it is more likely that the police will be looking for a body rather than a living person. The book follows the police team as they search desperately for any clues as to what has happened to her. Manon’s personal life is also part of the story as she is looking for a long-term relationship but her attempts at internet dating could hardly be deemed successful.

I really enjoyed how the story was told from multiple points of view which really helped to get inside the heads of the main players of the book. Manon is definitely the main character but there are also chapters from the point of view of the missing girl’s mother Miriam, her friend Helena and Manon’s colleague Davy. Davy was a character I particularly warmed to. He is a fairly young, idealistic detective constable and as well as being keen to solve this crime, he is also passionate about helping children in care. What he tells Manon about their experiences, influences some of her own decisions in an unexpected side-plot. Manon is a flawed character, don’t they always make the best detectives? She is talented but frustrated that she is not making progress in this case. Her messed-up love-life sometimes spills over into her working life. At times I felt sympathy for her but at other times I was just shaking my head in despair.

Susie Steiner has written a really compelling book, scattering possible suspects and clues throughout the book with not a few twists. The book kept me guessing to the end and until the various storylines came together, I had only a slight inkling of what might have happened to Edith. I was pleased to read in a Q&A with the author at the end of the book that there will be a sequel as there were so many characters I would like to know more about.

My thanks to the publishers for sending me a copy of the book as well as all the others goodies which came with it. Missing, Presumed was published as an e-book in February and in paperback on 1st September 2016 by Borough Press. You can order a copy online here: Missing, Presumed

‘For those who love their crime fiction rich in psychology, beautifully written and laced with dark humour. Dive in’ LUCIE WHITEHOUSE

A MISSING GIRL
Edith Hind is gone, leaving just her coat, a smear of blood and a half-open door.

A DESPERATE FAMILY
Each of her friends and relatives has a version of the truth. But none quite adds up.

A DETECTIVE AT BREAKING POINT
The press grows hungrier by the day. Can DS Manon Bradshaw fend them off, before a missing persons case becomes a murder investigation?