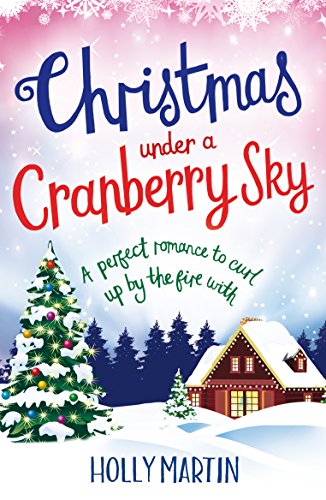 This week’s Christmas book review is the wonderfully festive Christmas Under a Cranberry Sky by Holly Martin. I read both Holly’s Christmas books last year and thoroughly enjoyed them. I’m pleased to say she has kept up the festive high spirits with this book.

Juniper Island is the (fictional) most northerly island in Scotland where Gabe Whitaker is just about to open a new resort, the Stardust Lake Hotel, and Christmas village. Piper Chesterfield reviews hotels worldwide and has been sent to the island to report on this new resort. Piper has no family and no real place to call home as she spends all her time travelling. What she doesn’t realise though is that Gabe is the owner of the Stardust Lake Hotel. Gabe was her first and only love and broke her heart 12 years ago. She disappeared from his life but he never forgot her – and she never got over him. Fate seems to have brought them back together but will they be able to put past hurts behind them and give their love another try? Is that even sensible when Piper travels so much and Gabe is now a single father who desperately wants to give his young daughter Wren stability?

Well first of all can I just say I want to to go to Juniper Island right now! What a fabulous setting Holly Martin has created. It could not be more festive if it tried with even the town itself being called Christmas. There’s an ice palace (with a mention for a character from one of Holly’s previous novels), snow and twinkling lights everywhere, cosy lodges, roaring fires, a herd of reindeer and glass igloos so you can go to sleep under the stars and maybe even catch sight of the Northern Lights. It just sounded idyllic, even with the wild Shetland ponies to watch out for.

The characters are wonderful too and not just Piper and Gabe. It’s a Christmas romantic novel so as you read you feel fairly sure that they are likely to get together by the end. But there are so many reasons that perhaps they shouldn’t and with Piper keeping rather a large secret which could ruin everything, you begin to wonder if perhaps they would be better off just being friends. Young Wren, Gabe’s daughter, was a delightful addition to the story. Full of innocence and seeing things in black and white as only young children can, she puts her father and Piper in some awkward situations with her questions! The villagers with all their charming shops selling such goodies as chocolate, wood carvings and bespoke snowglobes were all so lovely too and so keen to make the regeneration of the island a success.

Christmas under a Cranberry Sky is full of Christmas cheer from start to finish and sure to put you in the festive spirit. It definitely is a heart-warming, feel-good Christmas read to be enjoyed curled up somewhere comfy and cosy, preferably with a hot chocolate. And the good news is that you can already buy a second book set on Juniper Island as Christmas Under a Starlit Sky is also now available. I’m looking forward to reading more about the residents of Christmas and meeting familiar friends again.

My thanks to the publishers for my copy of this book. It was published by Bookouture in September and is available in both paperback and e-book. The Kindle version is currently only £1.99. You can order a copy here: Christmas Under a Cranberry Sky

Piper Chesterfield lives a glamorous life travelling the world and reviewing the finest hotels. She calls nowhere home, she works alone and that’s how she likes it. For long ago Piper decided that to protect her heart she should lock it away.

So when Piper’s next assignment brings her to the newly opened Stardust Lake Hotel for the festive season, the last person she expects to face is Gabe Whitaker, the man who broke her heart so completely she could never love again.

But Piper isn’t the only one who has been frozen in time by heartbreak. Gabe hasn’t forgotten the golden-eyed girl who disappeared from his world without a trace.

Now fate has reunited them on Juniper island, can the magic of Christmas heal old wounds? And can this enchanting town be the one place Piper can finally call home?