Orenda Books’ Finnish invasion continues and today I’m sharing a guest post by Antti Tuomainen, who is talking about his interesting and rather long journey to publication.

My Publishing Story by Antti Tuomainen

My first novel was published in the spring of 2006. When I say it like that it sounds as if it’s the most logical and matter-of-factual thing to have to have happened just then. And it wasn’t.

I was 18 or 19 years old when I knew and instinctively decided that I would be a writer. I wrote all kinds of things, but mostly poetry and short stories. I suppose the reason for this was primarily that poems and short stories tend to be, well, on the short side. I also wrote plays – short plays, that goes without saying – with really no idea who would ever stage them. The important thing is that I wrote.

My first attempt at novel-length manuscript took place in Berlin in the early 1990’s when I lived there for a while. It was a wonderful time in the then unrenovated and degentrified Eastern Berlin. I was young and… Well, more about that some other time. I wrote a novel (very much unpublished, of course) in a cold room in Prenzlauer Berg. This experience of writing a novel was important in at least two ways: I now knew that I could write a lengthier story and I knew what my true calling truly was.

Of course, I got sidetracked. Once back in Helsinki I ended up in an advertising agency, working as a copywriter. Not against my will, it was something I wanted to try. I quickly became quite good at it and spent the next 12 years doing it for a living. And I hadn’t given up on my ambition to become a writer. It’s just that I was working long days and drinking long nights when I wasn’t working.

I got sober in 2003. I also decided that now was the time to do what I had always wanted to do. I quit my advertising job and wrote a novel in 2004 and 2005 and promptly sent it to 7 or 8 different publishers. A small publisher answered within days. A Killer I Wish was published the next spring, in 2006. (On a lighter note: a big publisher answered with a standard no-letter in 2008 and regretted that the novel is not suitable for their catalog.)

The novel got good reviews and poor sales so I returned to advertising. But this time it was different. I wrote my second novel on the weekends and on the holidays. I worked hard all the time now. The novel – called My Brother’s Keeper – was published in 2009 to great reviews including the biggest newspaper in Finland, Helsingin Sanomat. Maybe three weeks after the novel’s publication I got laid off from the advertising agency I was working in at the time. I knew in my heart that this is it: it’s now or never, go do what you really want and don’t look back.

The very next day I started writing a novel that was to be The Healer. It came out in 2010 and in early 2011 it was awarded The Clue Award for the Best Finnish Crime Novel of the Year. Since then, it has been published in 28 countries.

It is now the November of 2016. I have recently published my sixth novel here in Finland and my third novel in the UK (THE MINE) has also just come out. I’m a full time writer now. I work with great publishers and I have a brilliant literary agency representing my work abroad. This is all beyond my wildest dreams. On the other hand, it also took a while. I decided to be a writer when I was 18. That was 27 years ago. And that really is how long my publishing story is.

The Mine, published by Orenda Books, is available in both paperback and as an e-book. You can order a copy online here: The Mine 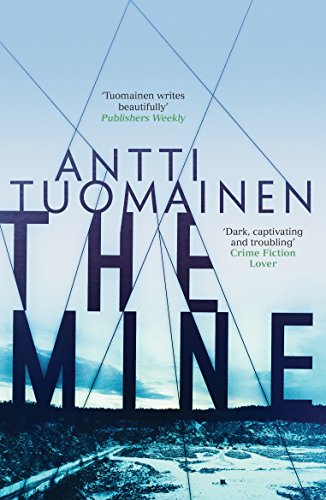 A hitman. A journalist. A family torn apart. Can he uncover the truth before it’s too late? In the dead of winter, investigative reporter Janne Vuori sets out to uncover the truth about a mining company, whose illegal activities have created an environmental disaster in a small town in Northern Finland. When the company’s executives begin to die in a string of mysterious accidents, and Janne’s personal life starts to unravel, past meets present in a catastrophic series of events that could cost him his life. A traumatic story of family, a study in corruption, and a shocking reminder that secrets from the past can return to haunt us, with deadly results … The Mine is a gripping, beautifully written, terrifying and explosive thriller by the King of Helsinki Noir.

One thought on “Antti Tuomainen – The Mine @antti_tuomainen @orendabooks”