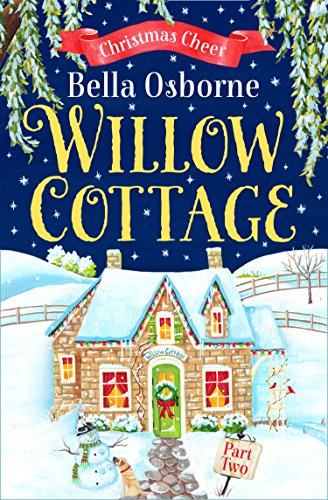 If you read part one of Bella Osbourne’s Willow Cottage series earlier this year, you will no doubt have been eagerly awaiting the second part of the story: Christmas Cheer. It was published as an e-book by Avon Books in October. If you haven’t already bought at at the bargain price of only 99p for Kindle (order here), here is an extract to whet your appetite. In this extract, we join Beth as she nervously begins a new job at the local pub.

Beth’s first night of working at the Bleeding Bear loomed large and she felt first-night nerves. She was going over to the pub only a few minutes early for Petra to show her the ropes, even though Beth had suggested that perhaps a day’s training might be more appropriate for a novice like her. Petra had insisted that, once you had the knack, pulling a good pint was the easiest thing in the world and the till was child’s play. Beth remained sceptical on both counts.

She showered, changed, checked she didn’t have paint in her hair, did a delicate job on her make-up, and surveyed the result as best she could in her pocket mirror. It was difficult to tell. She knew her hair badly needed cutting because it hadn’t seen a stylist since she’d left London, so she tied it back in a rough pleat. Leo was very happy to be spending the evening somewhere that had a television and free-flowing crisps and fizzy drinks.

In theory, the job was ideal. Granted, it was a world away from her city job but it was a new challenge and a chance to get to know a few more people. She was fretting a bit but she was quite excited too. Her life was different now; she was different. I’m enjoying being Beth again. I’m not Elizabeth any more, I never really was, she thought. Beth definitely wasn’t the gullible woman who had fallen for Nick’s charms, or the pliable individual he had subsequently moulded. She was back to being her old independent self and this was where she took the next step.

The pub was a little eerie without any customers as her heels reverberated on the wooden floors. The echo was repeating itself somewhere in the pit of Beth’s stomach. How daft to be nervous, she thought, but sometimes nerves and fears weren’t rational and rarely were they controllable. She realised that she wanted to be good at something again, which had added a little more pressure to the situation. Beth took off her coat and looked around the empty pub. It was exactly how you would expect a country pub to be: lots of beams, nooks and crannies and a big fireplace that was blackened with the memories of the past. Petra appeared and her smile dissolved any nerves Beth was harbouring.

‘You came! Let me start with a simple pint,’ said Petra, and so her training began. As she had expected, she didn’t do well the first time she pulled a pint, nor the second nor the third, but after that she had a feel for it as well as the feel of beer on her jeans. But it was okay. She was smiling and to her surprise she was enjoying it.

Her first evening was a quiet one, which helped, and Petra was on hand like a mother bird hovering nearby to keep a watchful eye on her fledgling. Beth had a slack few minutes and was wondering why they didn’t have a bar stool on her side of the bar when Petra returned from checking on the kitchen, and handed her a lemon.

‘In between the customers you do everything else: chop lemon for drinks, check crisp stocks, collect glasses from tables and bar, load dishwasher, unload glasses from dishwasher and wipe down and tidy up.’

‘Right,’ said Beth, as she set about slicing the lemon. Petra was right, there was always something to do and as soon as there was a gap between customers Petra was using it to explain something else to Beth. The real ales were a bit of a worry to Beth and she felt she ought to try to learn them as homework.

When there was a brief pause, Beth seized the chance to chat to Petra. ‘I hadn’t appreciated how intense it is running the bar and the kitchen.’

Petra grinned. ‘I love it. My kitchen staff are excellent so they don’t really need me. A young keen chef is a godsend. And this’, she waved her hand over the bar top, ‘is all I’ve known since I came to England.’

‘No. I came to study.’ Petra looked uncharacte‌ristically serious.

Petra was staring at Beth, her expression grave. Beth wanted to reach out and reassure her but she didn’t know why. Petra shook her head and the solemn moment was gone. ‘I’m not as clever as I thought I was,’ she said, with a forced laugh.

‘You’re very good at running a bar though,’ said Beth and she meant it. ‘You’re wasted here. You could be earning serious money as an office manager in London,’ she added with feeling.

Petra chuckled and shook her head. ‘I would hate an office. Here I have my regulars and I meet new people all the time. It may not pay the big bucks but it pays enough and the pub is mine … apart from the huge mortgage of course!’ She laughed again and went towards the other end of the bar even before the next punter had fully walked inside, and greeted them warmly.

Beth pondered their conversation for a moment. She’d not seen Petra look as tense as she did when she spoke about giving up her studies. Another customer approached the bar and Beth went into efficient barmaid mode and the thought was lost.

When they were down to five customers, Petra sent her home.

‘Thanks,’ said Beth, feeling ridiculously pleased with herself. A tired Leo staggered into view and the weary duo wended their way the few short steps back to Willow Cottage and their beds.

Beth is running away. With her young son Leo to protect, Willow Cottage is the lifeline she so desperately needs. Overlooking the village green in a beautiful Cotswolds idyll, Beth sees a safe place for little Leo.

When she finally uncovers the cottage from underneath the boughs of a weeping willow tree, Beth realises this is far more of a project than she bargained for and the locals are more than a little eccentric! A chance encounter with gruff Jack, who appears to be the only male in the village under thirty, leaves the two of them at odds but it’s not long before Beth realises that Jack has hidden talents that could help her repair more than just Willow Cottage.

Over the course of four seasons, Beth realises that broken hearts can be mended, and sometimes love can be right under your nose…

Willow Cottage is part of a serialized novel told in four parts, following the journey of Beth and her new life in the Cotswolds. The full book will be out next June, but for now, enjoy Willow Cottage seasonally!