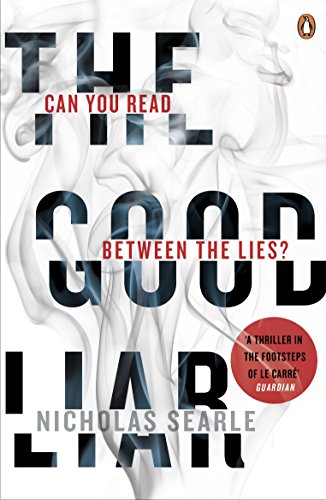 I saw Nicholas Searle at the Edinburgh Book Festival this year and was interested to hear that an incident in his own family gave him this idea for this novel. I knew I was going to be reading the book for my book group this month and was really looking forward to it. For the first part of the novel, though, I couldn’t really engage with the story and probably wouldn’t have finished it if I hadn’t felt I had to. And that would have been a mistake because, although I found it slow to start, I really did enjoy the story by the end.

The main character Roy, is a very unpleasant man who intends to con elderly Betty out of her life savings. They have met through internet dating and it is clear that it is not the first time that Roy has carried out this kind of cruel deception. As well as the story of Roy insinuating himself into Betty’s life, to the concern and disapproval of her family, we start to find out about his previous life. This was very cleverly done with his life story being told in reverse, Roy being a bit younger in each part of the story. It wasn’t until some way through the book that I had one of these lightbulb moments when I suddenly realised what was going on and just how clever the author had been.

It’s unusual for me not to like a main character but still to enjoy a book. I really don’t think that Roy had any redeeming features at all! He thought nothing of conning people, betraying friends and generally doing anything which was to his benefit. Betty did not have a very large part in the story to begin with, other than being someone for me to worry about. I began to suspect though that she wasn’t perhaps the soft touch that Roy thought she was and in the later stages of the book, her story comes much more to the fore.

A very interesting debut novel which, by the end, had me very keen to know what was going to happen to the obnoxious Roy and whether he would get the comeuppance he deserved. A slow starter for me but a book I really enjoyed in the end.

The Good Liar was published in paperback by Penguin in August 2016 and is also available as an e-book. You can order a copy online here: The Good Liar

This is a life told back to front.

This is a man who has lied all his life.

Roy is a conman living in a leafy English suburb, about to pull off the final coup of his career. He is going to meet and woo a beautiful woman and slip away with her life savings.

But who is the man behind the con and what has he had to do to survive this life of lies?

And why is this beautiful woman so willing to be his next victim?