I think this is a first for me, having a poet rather than an author in the spotlight! Andrew Sclater’s first collection of poetry, Dinner at the Blaws-Baxters’, is available to order from Happenstance by clicking here. The collection will be launched at Happenstance Winter Festival  on Wednesday 14th December from 6-7.30pm at the Scottish Poetry Library at the Canongate in Edinburgh’s Royal Mile. Also appearing will be Gerry Cambridge and Helena Nelson and I’m told there will be cake! Andrew will also be taking part in Vespers at the Serenity Cafe, Jackson’s Entry, Edinburgh on Tuesday 13th December from 7.30-8.30pm.

I must confess that I don’t read much poetry and I’m not really sure I can do Andrew’s work much justice. I’ll apologise to him now if I’ve completely missed the point of his poetry! Having read the collection a few times now I get a sense of looking back and nostalgia though not always seeing the past in a positive light. Many of the poems seem to suggest a cold and distant style of parenting yet still with love in the relationships. The loss of a parent and the complicated relationships children have with their parents at different ages and stages are a common theme in many of the poems.

Looking in particular at a few of the poems I can say for certain that I am very glad that I was not at the eponymous dinner party at the Blaws-Baxters! The veneer of civilised society is wiped away when a loud comment is made during a sudden silence.  I think we’ve all had one of those moments and strangely it’s never a positive comment which is overheard by all. It’s a poem which made me smile and let’s just say it doesn’t end well for Hector Blaws-Baxter. Blaikie’s Insomniac Register looking at various ways to die was laced with humour despite what would appear to be a bleak list. One particular poem which made me feel sad was Breaking Up. It’s about a young boy coming home from boarding school and not being collected by his parent as he has clearly hoped. When asked how the term has been, he feels unable to talk about the times he has been caned for reasons both legitimate (at the time I must add) and unfair, for fear of further punishment.

So despite not reading much poetry, I really enjoyed this collection and must thank Andrew for sending me a copy to read. Now read on for a really entertaining Q&A where Andrew’s link to a rather famous portrait, which I’m sure many of you will be familiar with, is exclusively revealed!

Thanks for joining me Andrew. First of all, would you tell me a little about yourself?

I’m a child of Wigtownshire and Orcadian-Norse families, born in the south of England in 1949. I was raised in perpetual embarrassment of the posh, as embodied by my parents’ nostalgia for lost grandeur. You see my great aunt was Lady Agnew of Lochnaw as painted by Singer Sargent and often still  seen hanging from the railings on The Mound. The result is I’ve never really known where I am or how I fit in. I’ve been an actor, teacher, scientist, gardener, and a sort of historian.  I co-founded the National Botanic Garden of Wales, which is a tangible success. I’ve always written poetry and it presides over a number of my great delights like love, Norway, building drystane dykes and riding a motorbike. The Beat Poets and some older boys at boarding school who invited me to read rule-breaking poems at dawn with vodka and Gauloises.

I first published myself in a little magazine in 1966. I got contribution from Stevie Smith, R.S. Thomas and John Betjeman.  I then was placed in the Sunday Mirror national children’s poetry competition with a poem called Old Body. Through the magazine, and readings I organised in Winchester in the 60s, I met a number of avantgarde poets.  I was simultaneously humbled and inspired to write constantly, but out of respect for them, and readers generally, didn’t publish anything until I’d served a 45-year apprenticeship.  It was via a couple of awards, including from the unsurpassable Scottish Book Trust, that I was gradually persuaded I might be read with some interest.  My mentors Clare Pollard and Gerry Cambridge (especially) helped me to believe  I wasn’t that shit. And Colette Bryce, Sean O’Brien, Maurice Riordan and my publisher Helena Nelson have all shone torches into the gloom of self-doubt. I’m inestimably grateful to them all. May the batteries hold out.

A lost world, class-ridden and emotionally underdeveloped.  The old British stiff upper lip sangfroid that isn’t quite as dead yet as it might be.  It’s also about displacement and the comedy of tragic mortality.  But poetry isn’t only ‘about’ of course,  it’s ‘in’ and ‘beyond’ and flirts with the incomprehensible.  Amongst other things including song.

My publisher chose it.  It’s the title of one of the poems. The book doesn’t have more than one dinner party, has nothing to do with celebrity chefs, and anyway you wouldn’t want to have been at that particular dinner party I’m sure you’ll agree.

Quietly.  When I was placed in the Picador Poetry Prize in 2011, it freaked me out a bit.  But publication isn’t really entirely the point for me. Anyway, my friend and mentor Colette Bryce once said success in poetry isn’t a great deal. She reassured me that the bright lights of poetry are pretty dim really.

Always a poem in the pot, or about to jump out at me. I spend nervous hours trapping the little devils

My favourite book is always a novel. I am afraid I get the nit comb out when I read poetry.  So the brightest literary light of the last few months for me is unquestionably Sebastian Barry’s The Temporary Gentleman.

A Long Long Way by Sebastian Barry is the book I’m reading right now in December 2016.

The Collected Short Stories of my favourite writer, the late and greatly lamented William Trevor.

I would like to see Shelley Day’s The Confession of Stella Moon on the big or little screen. I don’t know enough about actors to choose a cast, but the characters are beautifully defined in the text.  The book has a strong North-East England atmosphere and I guess great actors could be found in the creative melting pot that is Newcastle upon Tyne and region. Shelley is in fact my wife, but that of course has nothing to do with this choice… it’s a book that surprises and unnerves and asks lots of questions as well as being a great page-turner. 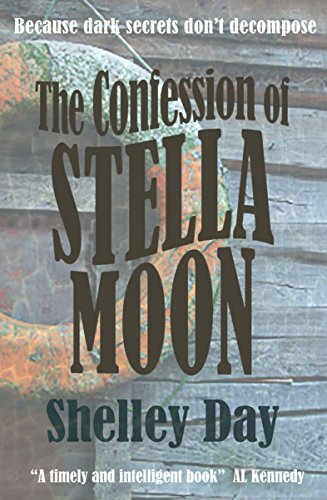 Probably they can’t, because I only visit Facebook very very occasionally. I can be traced with some difficulty via search engines with powerful bulbs though. And in the pub or open air which is the best place for connection

Probably Stefano the drunken butler in Shakespeare’s The Tempest.  I had the good fortune of playing him in a production that was applauded by none other than Robert Plant, who apparently said I want that man as my butler.  I think that job, if it is still open, could be life changing. I might even give up writing poems.