I’m pleased to welcome author Martin Gore to the blog today. Martin’s novel Pen Pals is available as an e-book or paperback and you can order a copy online here.

Your novel, Pen Pals, is set between the 1970s and 2000, why did you choose these specific time periods?

In 1970 I was 13, so the seventies saw the most poignant period of my life, leaving school, building a career and struggling with being socially awkward as the youngest of four brothers in a very male environment. I was raised in a highly charged politicised household. My mother a labour party activist and my father a right wing racist tory. The seventies saw ten years of strikes and class divides, and the ruination of much of our manufacturing base, which is for me the root of our current austerity. Pen Pals gave me the chance to tell that story before it disappears into history.

Pen Pals is a (historical fiction) family drama, what in particular drew you to this genre?

I love history as a subject, because you can learn so much from it. Whilst times change people do not. We are still capable of extraordinary generosity, jealousy, humanity, prejudice, humility, arrogance and love. I didn’t really pick a genre, just wanted to tell a story. I guess the story dictated the genre.

You have worked as an accountant , what made you decide to jump from numbers to words?

I’ve always loved numbers. From an early age I loved statistics, so accountancy felt right as a career. I’d always enjoyed creative writing in school though, and when I was nine I remember telling my mother I was going to be a playwright. She told me I should get a proper job, and she was of course correct.

I’ve always loved theatre, particularly musical theatre. So many years later I got involved in my AMDRAM group, the Walkington Pantomime Players. I began to reword songs for the show, writing comedy lyrics. A particular favourite was a version of When I’m Cleaning Windows, the George Formby classic, as the Wishee Washee Laundry song in Aladdin. It all evolved from there really.

When you are writing do you have a set routine or schedule that you like to follow?

I’d like to, but I have two paid directorships which require a fair amount of commitment, including the local acute NHS Trust. We built a writing shed last year, which is fully insulated with power and heating, so I go there to write. I write in silence most of the time. If I get immersed I’ll focus intently and almost ‘wake up’ an hour later. I get quite emotional at times. During one chapter of Pen Pals I was really quite tearful. The characters are real in my mind, and even when they are misbehaving I know what has made them that way. They are creatures of their time I guess.

When you’re not writing what would we find you doing?

I mentioned my hospital work, but I’m also in the hospital choir as it connects me to the shop floor so to speak. We were featured on the BBC Look North programme last Christmas, and were requested to audition by Britain’s Got Talent. We met Ant & Dec in Birmingham  and got four yesses from the big four judges, but sadly didn’t make the semi finals. It was a great experience though, which has led to a successful Hull City of Culture bid, and a concert in October of next year featuring ourselves and eight schools from Hull, with Jonathan Ansell of Ĝ4 headlining.

You also write pantomimes for your local group, do you get involved in the acting too?

I have been known to, but as a writer doing sound at the back is more useful as you get the audience perspective. On stage I’ve featured as a tree and a giant gingerbread man, and as the Genie in Aladdin.

When you were younger, you wanted to be a play-write and you are now ‘living the dream’ following your debut play, He’s behind You, which premiered in January 2016. Can you tell us more about He’s Behind You and maybe what kind of play you’ll be writing next?

It’s a mainstream comedy, but woven within a real human story of a woman whose ambitions are eclipsed by a dominant senior civil servant husband who retired early and has fingers in many village pies, including the local Amdram group. When the new shared services centre in heaven brings his early death through a case of mistaken identity there is tension between the Angel Gabriel and Beelzebub about the wisdom of correcting the error. Is Ella, his widow, better of without him? Enjoying her new found freedom? It’s Yes Minister meets Blyth Spirit as the comedy drama unfolds.

I’m tentatively playing with a new story about a older man made redundant too early for him to retire, and his return to the run down northern town of his birth. But primarily I’m working on my second novel, about the end of the pier show and the lives and loves of its cast and theatre management. I’m looking to publish in early summer.

Do you have a favourite author?

I was a big fan of Arthur Hailey, and more recently Nelson De Mille, but I mainly tend to read biographies. I’m currently reading the Bruce Springsteen story, as I’m quite a fan. I didn’t have much time for reading when I was working full time, and now I find that I’d rather write than read. A bit catch twenty two really.

If you could give younger you any advice about your writing journey, what would it be?

A tough question, as I’m still learning how to write and improve my skills. In novel writing the mantra ‘show don’t tell’ was my biggest early error, and my long suffering editor Alice Baynton would doubtless agree. But I think the biggest thing in writing a story is to keep the reader or audience guessing and let the story gradually unfold. If you can do that they keep turning the page or watching your play. If you fail in that you are doomed as they switch off. Pace is key, but I’m also delighted with the amazon reviews of Pen Pals concerning the empathy readers feel with my characters.

What can we look forward to from you next?

I’m hoping to complete my second novel by the early summer, and I’m also considering whether a Pen Pals sequel is a good idea. I’ve been delighted at the reviews on Amazon thus far, and some have remarked that they’d like to see a sequel, so who knows? 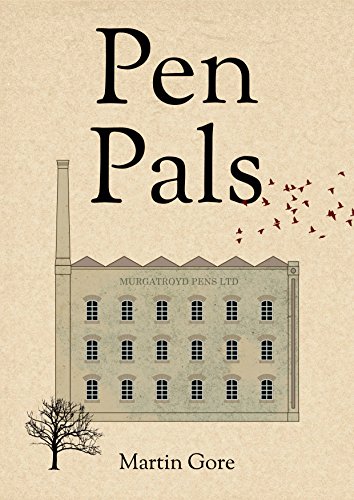 Pen Pals tell the story of Murgatroyd Pens, an iconic British brand produced in an old mill town in northern Britain, and of the Murgatroyd family who created it. As with all families they have secrets, and decisions made previously come back to haunt them. In strike torn 1976 family matriarch Jean Murgatroyd is faced with an impossible decision as her headstrong son James runs the business towards bankruptcy. In 2000 Jean dies and the long standing emnities of the family surface in a battle for the future of Murgatroyds and with it the future of the one horse northern town in which it operates.

One thought on “Interview with Pen Pals author @MartinGore”