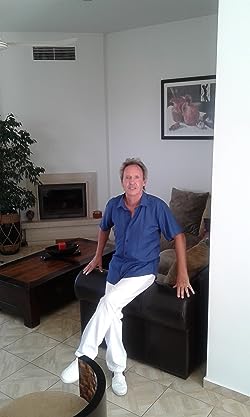 I’m pleased to welcome Owen Mullen back to the blog. Owen visited last year when he took part in my Author in the Spotlight feature which you can read here. His book, Games People Play, has just been released by Bloodhound Books and you can order a copy of that by clicking here or it is available from all good bookshops. Owen has written a guest post looking at places important to him and the path his writing has taken.

Who Knows Where The Road Goes?

Winter in the Mediterranean: the tourists have gone now and from my window I can see the Lefka Ori – the White Mountains – covered in snow, their peaks towering above the lush green valley before they disappear into the sky. Although it’s December, unbelievably, the sun is shining, we still have roses and Bird of Paradise in bloom, and yesterday I found a lime-green baby frog by the side of the pool.

For a guy from Scotland, it’s another world. Yet wonderful though it is, it’s not what gets me out of bed in the morning. As ever, people, what they do and have overcome are more uplifting.

For years I’ve been in the habit of listening to writers and musicians interviewed on Youtube, talking about themselves and their work. The most talented are almost always the most humble. Few claim credit for what eventually arrives on the page. I drew heavily from these people when I was running up against the frustration so common in the book business. Ten years. Or to be more accurate: ten years, three literary agents; a mountain of lavish compliments and a pile of rejection letters the size of the Eiger.

‘This book has everything. I know I’ll kick myself for turning it down.’

‘This guy is destined to be a major new force in British crime fiction.’

After a time I stopped believing it.

Now, while I wait for the Charlie Cameron PI series to be published [Games People Play will be available from the 19th of January 2017 closely followed by Old Friends and New Enemies in February, and the third title – big secret – towards the end of March], I’ve been working on another series, based in New Orleans. And as I write, past visits to the Big Easy stay with me; the distinctive architecture; the often tawdry history, and in the French Quarter, the two police cars permanently parked on Bourbon Street giving a clue to a darker presence that passes the camera-toting visitors by.

Because of this my most recent inspiration is James Lee Burke. Most of his books are set in the city and a few have been made into movies. Yet, for fourteen years his work went unrecognised, and his novel The Lost Get Back Boogie holds the record for being the most rejected book in American literature. It was turned down 111 times before somebody finally realised its worth and published it.

William Goldman, who wrote the screenplay for Butch Cassidy and the Sundance Kid, once said, ‘Nobody knows anything’. No one epitomizes that truth more than Burke; the Lost Get Back Bookie went on to be nominated for the Pulitzer Prize.

Eventually my break came with Bloodhound Books and I look forward to 2017 being a big year for me. Bloodhound is very successful and I have a feeling that with them I will be encouraged to develop as a writer as well as a story-teller in a way that wouldn’t be possible with a larger publishing house.

For me, the beat goes on. Today, yesterday and tomorrow I will be at my computer, keeping on keeping on. Somewhere out there is an author ground down by a business that seems heartless and impersonal who may read this and discover the will to stay with it. Of course it’s hard to cling to the idea that you’re right and the whole world is wrong when it seems you’re constantly being judged and found wanting but as Burke and scores of others have proved, it pays to stick with it.

As one of my characters says, ‘Who knows where the road goes?’

One thought on “Guest post: Who Knows Where The Road Goes? by Owen Mullen @owenmullen6 @bloodhoundbook”