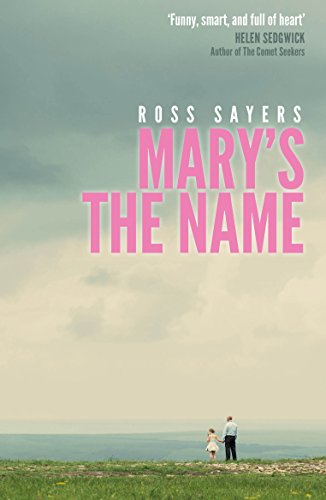 Well what is there to say about wee Mary? I just loved her and I loved this book. The story is told entirely from her eight-year old point of view which gives it a conversational, confiding feel. Mary lives with her beloved Granpa Arthur who works in a betting office. She has lived with him since her parents were killed in a car crash when she was very small and they are everything to each other. There is a robbery at the betting office and shortly afterwards, Mary and her Granpa go to stay on the the beautiful island of Skye. Through overheard conversations, Mary begins to realise that perhaps her Granpa was involved in some way and that perhaps they are in danger.

I think that Ross Sayers has done a brilliant job of capturing his young protagonist’s voice and you can read more about that in his guest post below. A lot of the humour in the book comes from Mary’s very literal understanding – or misunderstanding – of what the adults around her are saying. I liked the way the author used italics when Mary was using words she’d obviously heard adults using but maybe didn’t quite understand herself. Her youthful naivety is very sweet, such as when she hears the automated train station announcer: “A posh lady over the speakers told us the next train was on its way….There was a little gap before she said 7.34 and Aberdeen like she was checking her jotter to make sure she said the right thing.” The use of dialect for Mary’s speech and also for the other characters added a real authenticity to the dialogue.

Mary’s the Name will have you wanting to give Mary a wee cuddle as she goes through the confusion of being dropped by the girl she thought was her friend and the upheaval and upset of leaving her home.  I was so pleased when she found a new friend, Grace, in Skye and enjoyed the escapades they got up to. The strong bond between Mary and her Granpa was touching and clear to see though I was beginning to wonder just what he had got them into!

Oh and that bet at the end? (read it to find out) – I’m willing to bet she collects on it! Mary’s the Name had me smiling a lot but also left me with a lump in my throat. A wonderfully witty and warm debut by a fresh new voice in Scottish fiction, a real pleasure to read. Ross Sayers is certainly an author to watch in future.

Thanks to the publisher Cranachan Publishing for my copy of the book. It was published in paperback and as an e-book on 30th January. You can order a copy online here: Mary’s The Name

Ross Sayers has kindly written a guest post about using a child narrator as a protagonist. Read on to find out more about why he wrote about wee Mary.

While studying for my Masters at the University of Stirling, I read James Kelman’s Kieron Smith, Boy. Such was the impact this book had on me, I wrote almost exclusively with child narrators for the rest of the course (to be point where my tutors were getting a bit fed up!). I was so impressed by the way he fully committed to the voice and not once tried to input any fancy, ‘writer’-y phrases. I knew I wanted to do something similar.

A lot of people have asked me why I chose a little girl, rather than a boy, to tell the story. There were a few reasons:

I like to write humour into my stories, and writing as a child can really help with that. So much comedy can come from people not understanding things, and when children don’t understand things, not only can it be hilarious, but believable!

My tutor at Stirling, Liam Murray Bell, told me that to write a great child narrator, the writer must completely get rid of their own ego. You can never slip out of the vocabulary of your character. No matter how good a line you’ve written, if it’s too sophisticated for their age: get rid of it. I was more than happy to take this advice! I loved writing as Mary, not worrying about being ‘writerly’, just describing things as she would see them. Of course, this brings challenges too. Debating what Mary would understand or be ignorant to, what cultural experiences she has experienced at her age etc. There were a couple of times I thought of a funny line for her to say, only to have to cut it out because she’s too young to get the reference!

I really hope readers of ‘Mary’s the Name’ like Mary, and think she’s an accurate depiction of an eight-year-old girl. From the feedback I’ve had so far, I make a pretty good little girl. Not sure what this says about me!

“When me and Granpa watched James Bond films, he told me not to be scared because people didn’t have guns like that in Scotland. That must’ve been why the robbers used hammers.”

Orphaned Mary lives with her granpa, but after he is mixed up in a robbery at the bookies where he works, they flee to the Isle of Skye. Gradually, Mary realises that her granpa is involved. And the robbers are coming after him–and their money.

Mary’s quirky outlook on life, loss, and her love of all things Elvis, will capture your heart. Full of witty Scots banter, Mary’s the Name will have you reaching for the hankies, first with laughter, then with tears.

Heart-warming and heart-breaking, this darkly comic debut is from a fresh voice set to become Scotland’s answer to Roddy Doyle.