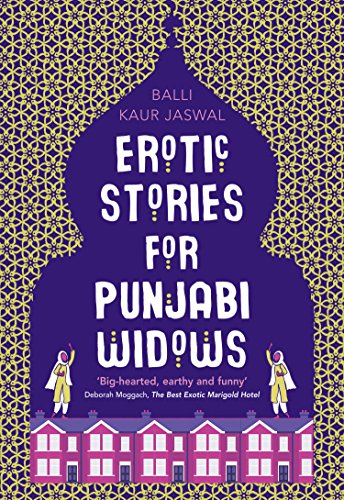 First of all can we all just admire that beautiful cover. It has to be said that the title is rather eye-catching too! I have a copy of this book in hardback and the picture doesn’t do it justice – the gold is beautifully embossed on the deep purple. But of course we mustn’t judge a book by its cover but by what is inside. And what is inside is a hugely enjoyable, quite unexpected story.

Nikki is a young woman from a Sikh family who, like many of the women of her age from that community, does not want to conform to tradition. As a result she has a very strained relationship with her mother. Working in a pub, she doesn’t earn much money and takes on a job in a community centre in a Sikh temple teaching creative writing to a group of women. At her first class though, it soon becomes clear that many of these women are barely literate and this is going to be more about going back to basics rather than writing stories. The women, mostly older widows, are keen to share stories though and Nikki suggests that she can transcribe them. What she does not expect though, is the kind of stories the women want to tell!

This was a very readable, hugely enjoyable book. It was not so much about a clash of cultures as a clash within cultures. Nikki has rejected the traditional values of the Sikh community where respect and modesty among the women are considered of paramount importance. As she gets to know the women in her class though, she does begin to have more respect for them and their choices. I also enjoyed getting to know the women, from Kulwinder still grieving the loss of her daughter, to young widow Sheena who suspects she might know more about Maya’s death, to Tarampal who really wants to learn to read but has quite a secret to keep. Like Nikki, I was quite surprised at the kind of stories the women wanted to share, the erotic stories of the title. As she put it to someone querying what she was encouraging the women to do, “…they are very well versed in what goes on in the bedroom. They have wisdom which comes with age and experience.”

However, sharing these kind of stories in a very traditional community with firm ideas about what is proper could put Nikki and her widows at risk. The book also looks at some darker aspects of the community such as forced marriage, bounty hunters, and so-called honour killings. A group of zealous young men known as The Brothers prowl the neighbourhood, making veiled and not so veiled threats towards women they believe are not respecting tradition. Despite this, Nikki starts to feel more a part of the community than she has done for a long time, “It’s my community too. I don’t live here but I’m part of it now. I have never felt so frustrated, amused, loved and bewildered as I have been in these past two months.”

Hilarious and heartwarming, an east-meets-west novel for fans of The Best Exotic Marigold Hotel

Every woman has a secret life…

When Nikki takes a creative writing job at her local temple, with visions of emancipating the women of the community she left behind as a self-important teenager, she’s shocked to discover a group of barely literate women who have no interest in her ideals.

Yet to her surprise, the white dupatta of the widow hides more than just their modesty – these are women who have spent their lives in the shadows of fathers, brothers and husbands; being dutiful, raising children and going to temple, but whose inner lives are as rich and fruitful as their untold stories. But as they begin to open up to each other about womanhood, sexuality, and the dark secrets within the community, Nikki realises that the illicit nature of the class may place them all in danger.