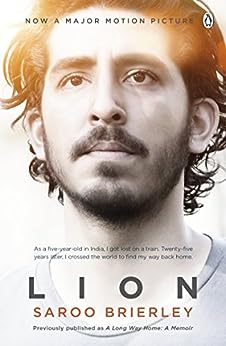 At the age of just five, Saroo Brierley  fell asleep on a train and woke up hundreds of miles away in Calcutta. Unable to find help, he survived for some time on the streets of Calcutta before being taken to an orphanage and soon after adopted by an Australian couple. Twenty five years later, with the help of Google Earth, he managed to finally find where he came from and travelled back to India to try to find his family.

Lion was originally published as A Long Way Home and of course recently has been adapted into an award winning film starring Sunny Pawar, Dev Patel and Nicole Kidman. I haven’t seen the film – I usually prefer to read a book first – but based on the book, I can imagine it will be quite an emotional rollercoaster.

It’s hard to imagine how a small child could go missing and that nobody would help him. I was horrified to read that even today there are an estimated hundred thousand homeless children in Calcutta. When we think of a child going missing, I think we imagine just one wandering around easy to spot, while adults frantically try to find them. But Saroo was clearly just one more child among many. It was also hard to believe that a five year old would go missing for more than a week before his family would report him missing. India, however, has a very different culture to ours and the author explained that it was not unusual for children to be in and out of other people’s houses and not see their parents for some time.

I was very moved to read about the author’s adoptive parents who seemed like very special people. His mother had always felt she would adopt an orphaned child rather than have her own and was so loving and supportive towards her new son. It was a touching moment when the author describes his adoptive mother and birth mother meeting for the first time “My mothers  – who had given me not one life but two – embracing with tears in their eyes.”

Lion is a fascinating book and a very readable account of the author’s experiences. I was particularly interested in reading about his tale of survival on the streets, the way that new technology helped him identify where he was from and finally his return home. It seems strange to say that I enjoyed the book, given that it was about such a frightening experience for a small boy, but the story of what happened to him afterwards and how he reconnected with his birth family is one which is really amazing to read. It was a real eye-opener making me think about the kind of poverty people live in in India even today. A heart-warming and uplifting memoir.

My thanks to Laura Nicol at Michael Joseph Books for my copy of the book. Lion was published by Penguin in January 2017. You can order a copy online here: Lion

As a five-year old in India, I got lost on a train. Twenty-five years later, I crossed the world to find my way back home.

Five-year-old Saroo lived in a poor village in India, in a one-room hut with his mother and three siblings… until the day he boarded a train alone and got lost. For twenty-five years.

This is the story of what happened to Saroo in those twenty-five years. How he ended up on the streets of Calcutta. And survived. How he then ended up in Tasmania, living the life of an upper-middle-class Aussie. And how, at thirty years old, with some dogged determination, a heap of good luck and the power of Google Earth, he found his way back home.

Lion is a triumphant true story of survival against all odds and a shining example of the extraordinary feats we can achieve when hope endures.