I think that A Kind of Vanishing by Lesley Thomson was one of the first books I ever bought for my Kindle and I thought it was terrific. The Dog Walker is the fifth in The Detective’s Daughter series featuring Stella Darnell and was published by Head of Zeus books earlier this month. I had hoped to have a review for you today but it is still one book away on my to-be-read list so watch out for my review soon. What I do have for you is a very generous giveaway from the publishers, who are offering you the chance to win one of three copies of the book. First of all, here’s what it’s about:

A haunted house, a broken family and a body that has never been found. Stella and Jack must reawaken the secrets of the past in order to solve the mysteries of the present.

January, 1987. In the depths of winter, only joggers and dog walkers brave the Thames towpath after dark. Helen Honeysett, a young newlywed, sets off for an evening run from her riverside cottage. Only her dog returns.

Twenty-nine years later, her husband has asked Stella Darnell, a private detective, and her side-kick Jack Harmon, to find out what happened all those years ago.

But when the five households on that desolate stretch of towpath refuse to give up their secrets, Stella and Jack find themselves hunting a killer whose trail has long gone cold…

Sounds great doesn’t it and how atmospheric does that cover look? So now for your chance to win a copy. It’s UK and Ireland entrants only I’m afraid due to postage costs. You can enter up until midnight on Tuesday 25th April and I will contact the winners within 24 hours.

If you’re not lucky enough to win a copy, you can buy one from all good bookshops or order a copy online here: The Dog Walker 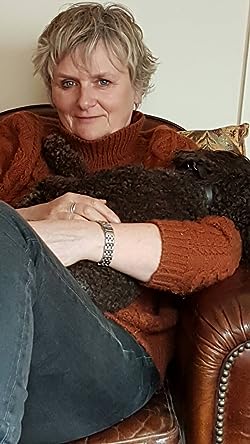 Lesley Thomson is a Londoner. Her first crime novel A Kind of Vanishing won The People’s Book Prize in 2010. The Detective’s Daughter is a number one bestseller and Sainsbury’s ebook for 2014. Ghost Girl, the second in the The Detective’s Daughter series (2014) went to number one in Sainsbury’s e-chart and is another bestseller. The Detective’s Secret was published in 2015. The Runaway, an ebook short about Stella Darnell (the detective’s daughter) came out in July 2015 and the fourth in the series, The House with No Rooms in 2016. The Dogwalker, another case for Stella and Jack, came out in April 2017.