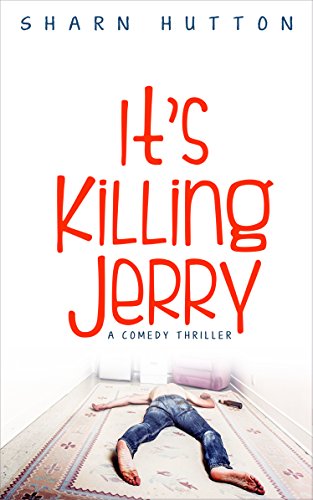 I’ve an extract from comedy thriller It’s Killing Jerry by Sharn Hutton today. Sharn has also offered one of my lucky blog readers a goodie bag. You can see what’s on offer and enter the giveaway by clicking the Rafflecopter link below. You’ll find social media and buying links at the bottom of this post.

Fleeced by his ex-wife, oppressed by a narcissist boss and ridden over rough-shod by a two month old infant, Jerry might have thought he’d been keeping the peace but, the tide of resentment is turning against him.

Fighting for his job, control of the bank statement and, ultimately, his life, Jerry’s got problems and they’re about to get a whole lot worse.

Breakdowns and break-ups, manipulation and thievery, green-eyed phoneys and unscrupulous deals. Pretending to be someone else just won’t cut it this time and featuring on the late evening news as: missing, presumed murdered, is only the beginning.

For your chance to win the prize, click here

You can enter the giveaway up until midnight on 26th April and I will contact the winner within 24 hours. If you’re not lucky enough to win, the book will then be on special promotion from 28th-30th April at only 99p for the Kindle version. Now read on for an extract from It’s Killing Jerry.

BOOK EXTRACT : “Didn’t you make your own fate?”

Mama twisted the tissue in her hands. “Poor Maria! Her husband cut down in the prime of life. Poof! One minute he was painting the house then, wham! Broken back, fracture skull.” She dabbed at her eyes.

Sitting in the corner of the Cavalli sofa that Isabell liked for herself, Mama had been recounting family stories since mid-afternoon. Papa, who’d heard it all before, had escaped for an evening walk, but Isabell was trapped. She prowled back and forth in front of the empty open fireplace, gripping at her upper arms.

“All the family come to the hospital, but they could no save him. Poor Sal. So sad.” She made a hearty blow into the tissue. “Now she has to look after those children all alone.” She peered at Isabell over her glasses. “At least she has the children.”

Isabell turned her back and stooped to plump a cushion. Not this again. “Mama.”

“Hmm. Well, the family have pick her up and taken her to the heart. Sancho has finish the paint. It never look so good! And Alba picks the children up from school while Maria is at work.” She paused to peer at Isabell again. “Ibbie, why you no have a job? If you help to make the good home maybe Papa and I can have our grandchildren. Hmm?”

For once, Isabell was thankful to hear the backfiring Fiat bucking up the drive and stalked over to the window. It gave her an excuse to change the topic. “Jerry’s home at last.” Isabell scowled at her watch: 9:30. It was about time.

Jerry bounded into the house, scraping his gym bag along the two-hundred-pound-a-roll wallpaper before tossing it to the floor at the foot of the stairs. Isabell bit her tongue and scampered over to peck him on the cheek: the dutiful wife.

Jerry slapped her on the arse. “Evening, darling! Had a good day?” Isabell wobbled backward. What the hell did he think he was doing? He pushed past her toward the kitchen. “Chuck that in the wash, would you? Any dinner? I’m starving.”

Isabell stood, jaw flapping, for a moment before catching her mother’s eye, who was shooing her after her husband. Isabell hoiked up a smile and scuttled into the kitchen.

“What the fuck are you doing?” she hissed.

“Back from a hard day at the office,” Jerry bellowed as Mama appeared in the doorway. Isabell felt her presence and switched on the goddess.

“Chicken salad OK?” she simpered. Jerry flopped into a seat at the table and shoved Isabell’s flower arrangement backward, away from the middle. He knew it would annoy her.

He’d pay for that later. The Domestic Goddess routine was all very well, but Isabell only had a few dishes that she could make. With Mama peering over her shoulder all the time it was difficult to pass ready-made stuff off as her own. Jerry was going to ruin things if he carried on like this. She rummaged around in the fridge, cursing under her breath.

“I say to Ibbie, why she no get a job.” Mama sat down opposite Jerry at the polished oak table. Isabell seethed behind the fridge door. She couldn’t bring herself to look at Jerry’s undoubtedly smug expression.

“Great. I look tomorrow.” Isabell cut the comment dead and tossed a selection of salad and a half-eaten chicken carcass onto the pale stone counter. She snatched a knife from the block and hacked at its flesh.

“I’ve got a business trip coming up, darling, so you can lay off the gourmet menus for a few days.” Jerry snorted a laugh at Mama then went on to examine his fingernails. A business trip? A likely story. It was just another excuse not to play ball.

“Really? Oh?” She scowled at Jerry just long enough for him to see, but not Mama. “Where are you going?” Let’s see what he can come up with.

“Las Vegas Convention Centre. TEKCOM. It’s a huge event. Locksley’s trusting me to represent the firm.” Jerry buffed his nails on his trousers and gave her a grin.

“Is that right? Well that is news. How long will you be away?” Little shit. He wasn’t keeping to his side of the bargain here at all. How could he pretend to be her doting husband if he was out of the country? She spun the knife’s point on the work surface, drawing a thin squeal from the stone.

“Oh well, the exhibition is on for five days and I’ll need a couple of days either end for travel and recovery.”

“Travel and recovery,” she echoed through gritted teeth.

Isabell annihilated the salad and threw a heap onto his plate followed by the hacked chicken. She clonked the plate down onto the table in front of him. Jerry wolfed it down, made a big show of stretching and yawning and after saying how terribly tired he was from all his hard work, sauntered off ‘to bed’.

Isabell heard the Fiat backfire on the corner, but Mama didn’t seem to notice.

“No worry about it,” Mama said at last, “Is just a business trip. He works to make the good home.”

“Yes, yes.” Isabell wasn’t sure how to play it. Was she pleased that her husband worked so hard, or upset that he was going abroad while her parents were visiting? Jerry was irritating her so much it was clouding her judgement.

“You are lucky. He’ll be back. Think of your cousin Maria. Her husband will never come home again.”

That might not be so bad. Distinctly appealing, in fact.

“You know, Ibbie, life can take you on many different paths. A good choice here…” Mama waved her hand, “A bad choice there… Fate will have its way. Think of Cousin Angelina.” Isabell winced, God forbid she got her fate.

“She thought she was the modern woman asking for divorce. A bad choice. Where did it get her? Ostracise from family that’s where. No-one want to know her. Flouting God’s law! Selfish whore!” Mama crossed herself, got up from the table, ambled to the kettle and switched it on, calm again. “Is strange. You think of Maria and Angelina. Both single women now and how different their lives have turn out. The family can no do enough for Maria. Fate. I’m telling you.”

Isabell wiped the knife clean and slid it back into the block. Didn’t you make your own fate? 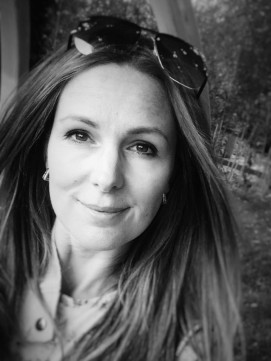 Sharn Hutton scuttled along in the rat race with everyone else, until the advent of babies provided an excellent excuse not to go back to the office. Before too long she realised, however, that ‘giving up work’ wasn’t really that at all. In fact, career motherhood had just as many challenges and disappointments as the corporate world, the hours were longer and the pay was rubbish! The best laid plans and all that…

Time marched on and as the children spent more hours at nursery and then school, she started to write during stolen moments. The seed of a story took hold and eventually grew into her first novel.

Now working from home in Hertfordshire, she wouldn’t trade her tiny writing room at the back of the house for the fanciest of corner offices. Apart from anything else, where would the dog’s bed go?

‘It’s Killing Jerry’ is her debut novel and she’s expecting many more to come. (Books that is, not babies. Definitely not babies.)