I have an excerpt from Gemma Metcalfe’s thriller Trust Me today – one which ends which quite the cliffhanger I think! Trust Me was published as an ebook by HQ Digital in March and already has ninety 5* reviews. It’s currently available for only 99p and you can order your copy here. There is also a UK only giveaway where you can win a Boots voucher, a copy of the book and some surprise Boots goodies. You will find all the details of how to enter by clicking GIVEAWAY. First here is what you need to know about the book: 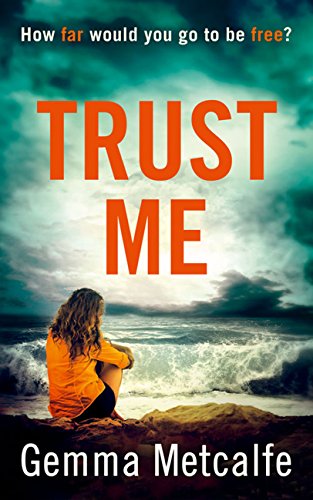 Lana needs to sell a holiday, fast. Stuck in Tenerife, in a dead end job, she never expected a response quite like Liam’s.

Thousands of miles away a phone rings. Liam never intended to pick up, he’s too busy choosing the quickest way to die. But at least someone should know the truth before he goes, even if that someone is a stranger.

As time runs out both are drawn to the other, expressing thoughts they never imagined they would share.

When you’re about to die will your secrets even matter?

‘Trust Me is a brilliantly fast paced read, with a unique premise…add to that a spectacular twist, and I couldn’t turn the pages fast enough.’ – Lisa Hall, author of Between You and Me

“It’s a well written thriller that had me hooked from the gripping prologue and gasping out loud when I read a jaw dropping, unexpected twist towards the end.” – Nicki Richards

“I couldn’t stop reading, because I just needed to see what secrets will be spilled next!!! I loved the way the story jumped between the present and the past, it was done seamlessly, and added extra juice to the storyline. It was a great read and highly recommended.” – Tanya Brough

And now for that excerpt:

‘Bloody hell, Lana…’ My words momentarily evaporate. ‘But I understand why you gave it to him, of course I do.’

‘Do you?’ she asks somewhat sarcastically. ‘Do you really, Liam? Because I don’t… it’s haunted me ever since.’

I’m stopped from answering by the chime of the clock. It’s an old, antique monstrosity which clings on to the wall for dear life. Jessica’s grandad gave it to her when he was still alive, which is the only reason it’s not collecting dust in the charity shop. It’s at odds with the rest of the house, which is contemporary and stylish.

Anyway, this is it. The hour I’ve been dreading is finally upon me. By the time the clock has rotated one hundred and eighty degrees my life will definitely be over, one way or another.

My options are simple. Realistically, I have twenty to thirty minutes left, slightly more if circumstance permits, in which to end my life or decide to live. What is a pain worse than death? It’s pretty simple. My life.

I suppose you think I’m being slightly melodramatic but you don’t really understand, not yet anyway. In the time I’ve been alive, too many people have suffered. I only ever wanted to protect them all, but my protection is clearly as useless as an unloaded gun. And this morning, Jess finally excelled herself. She really has left me with no choice. At least I’ll be reunited with Alice and Summer, and of course my baby who never had a name.

Lana is quiet on the other end of the telephone. I feel for her, I really do. In another situation, a different life, I’d gladly jump on a plane and make it all okay for her. But I think we have established that my knight-in-shining-armour routine is a far cry from that of a superhero.

‘Are you ready to tell me what came next?’ I ask.

‘No, Liam,’ she replies, her voice becoming an almost tonic. ‘I don’t want to say any more; I want to hear what you have to say. Did it get worse? With Jessica, I mean?’

I look at the clock. It has just passed four o’clock. I cast my eyes down to the knife, the one I’m still clutching tightly to my chest. A stab in the chest and it would all be over in a matter of seconds. I still have time to end it all. But first I must expose Jessica. I can leave this earth in peace, if one person knows the real truth.

‘Okay,’ I say with renewed purpose. ‘I suppose it’s time to tell you about Sally.’

Gemma Metcalfe is a Manchester born author who now lives in sunny Tenerife with her husband Danny and two crazy rescue dogs Dora and Diego. By day, Gemma can be found working as a Primary school teacher, but as the sun sets, she ditches the glitter and glue and becomes a writer of psychological thrillers. An established drama queen, she admits to having a rather warped imagination, and loves writing original plots with shocking twists. The plot for her debut novel ´Trust Me,´ is loosely based on her experiences as a call centre operative, where she was never quite sure who would answer the phone…