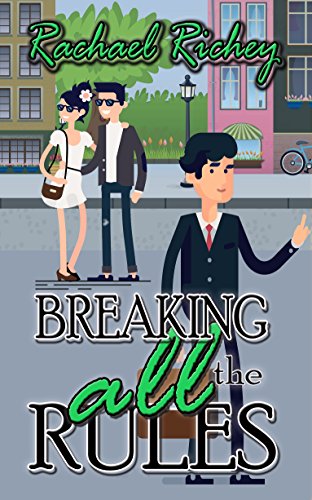 Never judge a book by its cover. That’s what they say but I think we all do. Now being honest, I don’t think I would have picked this book up based on its cover (apologies to the designer). It’s just not one which would have appealed to me personally. I read it because I have read the Nighthawk series by Rachael Richey and very much enjoyed them. (In fact, it was a real thrill to see part of one of my reviews quoted as praise for the author at the beginning of this book.) Never judge a book by its cover is a very true saying in this case though, as I thoroughly enjoyed the book.

Kate is in a muddy field buttering what seems like hundreds of scones for a village fete, when she hears a familiar voice say her name and looks up to see Sam, the man she had a crush on at school. I have to say here that I must be getting old as Kate says she’s never getting old if it means “spending one’s Sunday in a muddy field with over-enthusiastic tea-drinking women.” Doing exactly that at a village fete sounds an ideal way to spend a Sunday to me! I digress though. Sam still gives Kate all the feelings she had when she was in love with him at school. He’s been away in various places around the world for the past eight years and she hasn’t heard from him in that time. When he asks her out for a drink to catch up the following Friday she tells him she can’t because she is going to a hen night and they make other arrangements. What she doesn’t quite tell him, is that it’s her own hen night!

I really enjoyed reading about Kate and her dilemmas over the next few weeks. She gets herself into some awkward situations, finds herself telling lies to so many different people in the run-up to her wedding and has to make some really important decisions. I felt that Rachael Richey captured so well all the confusion and guilt that Kate was feeling. Like Kate, I couldn’t quite decide if she was just having last minute nerves or if Richard really wasn’t the man for her. He seemed perfect for her but was he the safe, reliable and let’s be honest, rather boring choice? To me Kate seemed so full of life, dreams and ideas and Richard just didn’t seem to understand her. I didn’t like Kate’s sister Vicky at all. She was so different from Kate and seemed to delight in being argumentative and putting her down. Now Sam, I did like very much but at the same time I felt he really shouldn’t be getting involved with another man’s fiancée, especially so close to the wedding. He was sweet and romantic, very attractive and really seemed to appreciate Kate for who she was. There were several other characters who I really warmed to, such as Kate’s grandmother who had wise advice to offer based on her own rather surprising experiences.

I had my suspicions about what might happen at the end of the book but the author did a great job of providing some surprises right up until the end and there were several points when I had a big smile on my face as I was reading. Breaking all the Rules is engaging, romantic, feel good reading and I really enjoyed it.

My thanks to the author for offering me a copy of the book. It was published on 5th May by The Wild Rose Press as an e-book and in paperback. You can order a copy online here: Breaking All the Rules

Kate is getting married in a month. Richard, her fiancé, is a lawyer: rich, successful, and very good-looking. She’s definitely in love with him. No doubt about that.

So when Sam, a good friend and her high school crush, returns after eight years of traveling, she doesn’t care. After all, he never actually asked her out, and then he went traveling without her, contrary to their plans. She only agrees to go to dinner with him in order to hear all his news, so why doesn’t she tell him she’s getting married? And is he still bothered by the tragedy eight years ago?

Sometimes life just gets too complicated, and Kate finds she keeps having Very Bad Ideas, which lead to even more complications. Just three days before her wedding, she finds herself in a situation that demands the biggest decision of her life.