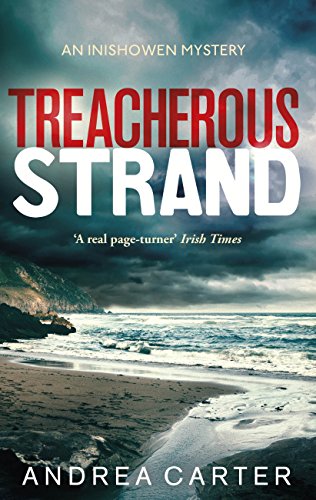 Treacherous Strand is the second of Andrea Carter’s Inishowen mysteries featuring solicitor Benedicta (Ben) O’Keefe. Don’t worry if, like me, you haven’t read the first book as this reads perfectly as a standalone. There are a few brief references to the previous story but really just enough to make you familiar with Ben’s background. The story begins with an immediately gripping chapter which sees Ben driving at speed along a Donegal coast road to where a body has been found on a beach. The woman is identified as Frenchwoman Marguerite, one of Ben’s clients, and Ben feels that she has somehow let her down. The police believe it to be a case of suicide but Ben isn’t convinced and begins her own enquiries into what happened.

The front of the book has a quote from The Irish Times saying it’s ‘a real page turner’ and I would have to agree that it really is. I found Ben to be a really engaging character. She has known tragedy in her past, is trying to put that past behind her and make a new life in a different part of Ireland. The fact that she is clearly a booklover obviously endeared her to me. I think all bookworms will identify with what bookshop owner Stella says to her “You think you’re going to live to be a million and be able to read everything you want to.”

The sense of mystery built up satisfyingly over the course of the book as Ben began to discover more about Marguerite and the secrets she was hiding. I do love a story where it seems everyone is hiding something and there were certainly plenty of secrets in this town where almost everyone seemed to have something they knew about Marguerite which they didn’t initially reveal. This set up so many people as suspects with so many possible motives so I found it really gripping as I tried to work out who, if anyone, was responsible from Marguerite’s death. While carrying out her investigations, Ben was of course still working with her clients and although I knew there would be links between them I just couldn’t think what they would be. The author, however, drew everything together beautifully as the book raced towards its very dramatic conclusion.

I really enjoyed this book and must mention that I thought the small town setting with the nearby brooding dark cliffs and stormy seas added beautifully to the atmosphere. I’ll definitely be looking out for more books featuring Ben as I am keen to know more about this strong character. Andrea Carter has written a terrifically engaging mystery which was well plotted and kept me guessing right until the end.

Thanks to the publishers for my copy of this book. Treacherous Strand is published by Constable and is available as an e-book and a paperback. You can order a copy online here

A woman’s body washes up on a remote beach on the Inishowen peninsula. Partially-clothed, with a strange tattoo on her thigh, she is identified as Marguerite Etienne, a French woman who has been living in the area.

Solicitor Benedicta ‘Ben’ O’Keeffe is consumed by guilt; Marguerite was her client, and for the second time in her life Ben has failed someone who needed her, with tragic consequences. So when local Sergeant Tom Molloy dismisses Marguerite’s death as the suicide of a disturbed and lonely woman, Ben cannot let it lie.

Ben uncovers Marguerite’s strange past as a member of a French doomsday cult, which she escaped twenty years previously but not without leaving her baby daughter behind. Disturbed by what appears to be chilling local indifference to Marguerite’s death, Ben pieces together the last few weeks of the French woman’s life in Inishowen. What she discovers causes her to question the fragile nature of her own position in the area, and she finds herself crossing boundaries both personal and professional to unearth local secrets long buried.