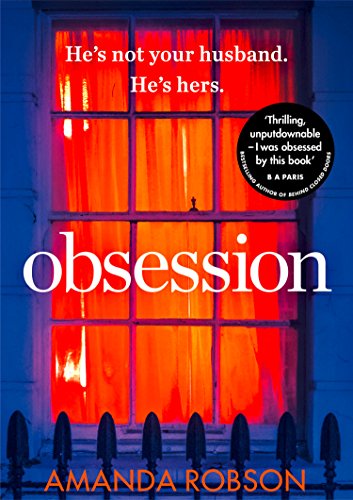 Obsession is the story of what happens to two couples when a seemingly light-hearted question – “Who would you go for if you could?” – sends their lives spiralling out of control. Carly asks husband Rob this question one evening and although he doesn’t initially want to answer, she persists and he gives the name of her friend, Jenni. Carly becomes obsessed with this affair that doesn’t exist and quickly relationships between Carly, Rob, Jenni and Craig take a dark turn, as the obsessions threaten to destroy their friendships and marriages.

I have to say that I did not find any of the characters particularly likeable. Even those who initially seemed to be the injured parties soon came to show their own dark sides. It’s a slow burner of a read with the story really developing more for me in the second half of the book. There are plenty of dark themes explored such as extreme jealousy, obsession of course, depression, alcoholism, religious zeal and mental health. There are plenty of twists throughout the story and with the short snappy chapters told from all the characters’ points of view, it’s a book where you may be tempted to keep reading  ‘just one more chapter’. But which of these characters could you actually trust to be telling the truth? I really didn’t know and with all four of the main characters so completely absorbed in their own interests, I really couldn’t predict how things would end. And what dramatic and completely unexpected events take place in the latter stages of the book. That one little question at the beginning of the story was only the start of a downward path that would lead to disastrous consequences.

I did find the story a bit slow to begin with and the fact that I didn’t really like any of the characters made it difficult to engage with them, but it was worth persisting with for the closing stages of the book which were cleverly and shockingly written.

If you have been following the blogtour, you will already have read five things you didn’t know about the characters in the book. Now read on to find out five things about author Amanda Robson.

5 Things You Didn’t Know About Me

Thanks to Helena at Avon Books for my copy of the book. At the time of writing it is on offer at only 99P for the Kindle edition which you can order here. You can also buy in paperback from any good bookshop.

One evening, a wife asks her husband a question: who else would you go for, if you could?

It is a simple question – a little game – that will destroy her life.

Carly and Rob are a perfect couple. They share happy lives with their children and their close friends Craig and Jenni. They’re lucky. But beneath the surface, no relationship is simple: can another woman’s husband and another man’s wife ever just be good friends?

Little by little, Carly’s question sends her life spiralling out of control, as she begins to doubt everything she thought was true. Who can she trust? The man she has promised to stick by forever, or the best friend she has known for years? And is Carly being entirely honest with either of them?

Obsession is a dark, twisting thriller about how quickly our lives can fall apart when we act on our desires.