I’m very pleased to welcome Anne Marie Brear to the blog today as she shares a really fascinating guest piece about the inspiration behind her latest novel Where Dragonflies Hover. She was born in Australia to English parents. She has been a life-long reader and started writing in 1997 when her children were small. She has a love of history, of grand old English houses and a fascination of what might have happened beyond their walls. Her interests include reading, genealogy, watching movies, spending time with family and eating chocolate – not always in that order!

Where Dragonflies Hover is published by Choc Lit in paperback and eBook format. AnneMarie has another book – Where Rainbows End – published with Choc Lit which is available as an ebook. You will find an excerpt at the end of this post and can order a copy online here: Amazon UK  Amazon USA

For some years I have had a fascination with what is known as the First World War, or the Great War. (World War I 1914–1918)

This was a time of enormous change in the world. For the first time countries banded together to fight a common enemy. I’ll not go into the politics of the time or the reasons why the war happened, that is for professional historians to determine, but the effects of the war were far reaching, particularly in Europe.

In Great Britain the changes impacted on all walks of life, from the wealthy to the poor. Women were asked to step into the space left behind by the men who went to war. Not only did they have to work the men’s jobs, but they also had to keep the home running as well. Not an easy task to a female population who was expected to simply marry and have children and keep a nice house. Women of that time were sheltered from the world, innocent. All that was soon to change.

In my book, Where Dragonflies Hover, modern woman, Lexi, finds a diary written by an Australian nurse, Allie.

Allie wrote about her time as a nurse in Great War, and of falling in love with Danny, an English officer. She wrote of her struggles to help injured and dying men who came to her straight from the battlefield, covered in mud and blood.

To write Allie’s story I had to do a lot of research about World War I. I enjoy researching, and because the Edwardian Era is one of my favourite eras, it was no hardship to spend hours reading sources from that time.

I really wanted to make Allie’s story as real as it could be. One of my research sources was reading, The Other Anzacs by Peter Rees. A truly extraordinary book detailing the true stories of Australian nurses in WWI. A lot of my inspiration came from that book. What those nurses went through was simply remarkable. 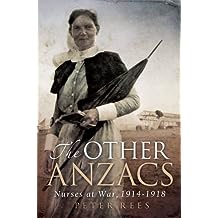 Another book I read was The Roses of No Man’s Land by Lyn MacDonald. Another interesting account of what the allied nurses and VADs from other countries went through. These women went from the comfort and security of their homes to the heart of battle zones.  They had to learn new skills swiftly, for even dedicated career nurses had never experienced before the types injuries and wounds they encountered only miles from the front line. Those women had to sustain difficulties they never thought of, for example at times there were food shortages, hygiene hardships, danger from bombings, homesickness and many more problems. Yet, these women, some just young girls, dutifully headed into an alien world without the promise of survival.

It is, of course, impossible for me, or anyone, to know exactly how these women felt during this challenging time, we can only read about their experiences. However, simply reading about them is enough for me to give them my heartfelt gratitude and admiration for what they endured.

I hope I did justice to their stories, to what they gave up and for the sacrifices they made to help us win the war.

Everyone thinks Lexi is crazy when she falls in love with Hollingsworth House – a crumbling old Georgian mansion in Yorkshire – and nobody more so than her husband, Dylan. But there’s something very special about the place, and Lexi can sense it.

Whilst exploring the grounds she stumbles across an old diary and, within its pages, she meets Allie – an Australian nurse working in France during the First World War.

use leaves her marriage in tatters. In the lonely nights that follow, Allie’s diary becomes Lexi’s companion, comforting her in moments of darkness and pain. And as Lexi reads, the nurse’s scandalous connection to the house is revealed …

Excerpt from Where Dragonflies Hover

The late sunshine enveloped the house in a golden glow. Again, it seemed to call to her, begging for attention. A path on the left of the drive looked inviting as it meandered through a small strand of poplars. Lexi grabbed her keys, locked the car and took off to explore again. She had nothing to rush home to now, and if she got caught for trespassing, then so be it.

The overgrown pathway brought her out on the far side of the grounds near the end of a small lake. She gazed over the water towards the back of the house and noticed a paved terrace area. From there the lawn then sloped down to the water. She’d not been around the back before and fell even more in love with the property. She could imagine the serenity of sipping a cool drink on a hot summer’s day and looking out over the lake.

Lexi stepped out along the bank. A lone duck swam by, its movement serene on the glassy, dark surface. This side of the lake was in shadow from large pine trees, and she stumbled on fallen pinecones hidden in the long grass. On the opposite side of the water were some small buildings, a garage, fruit trees in early blossom, and an overgrown vegetable patch, complete with a broken, rejected-looking scarecrow.

She wandered over to a narrow shed on her left and peered through its sole, dirty window. Unable to make out much in the dimness, she walked around to the front and was surprised when she was able to pull the bolt back on the door. Why didn’t people lock things? A covered rowboat took up most of the space inside. She smiled, seeing herself rowing it on the lake. Growing more excited, Lexi edged around it to peer at the workbenches and the odd assortment of tools and useless things one found in abandoned sheds. It was like treasure hunting in an antique shop. She used to love doing that with her grandfather.

She glanced about and spied a dusty painting leaning against the wall. The scene was of a child and a brown dog. Behind the canvas were more paintings, some framed, some not. Lexi flicked through them. The ones that caught her attention she took out and set aside.

She looked for somewhere to sit and study the paintings. A small tin trunk wedged under a workbench seemed the only offering. Thinking it empty, she went to tug it out, but it remained fast.

Using both hands, she heaved it out and was showered in a puff of dust. Squatting down, she inspected the latch that was held tight with a small lock. ‘Why are you locked?’ she murmured. The shed was open to anyone passing by, yet this ugly little chest had a lock on it. The trunk was nothing special, plain and in parts rusted. No ornament or writing hinted at its use.

Intrigued, she grabbed a hammer from the workbench, but then hesitated. She had no right to open someone else’s property. Lexi closed her eyes momentarily.What was she thinking of breaking into the trunk? What am I doing? Never had she broken the law and here she was guilty of trespassing and breaking and entering! She looked around the rowboat as though expecting someone to jump out and arrest her.

Something inside urged her on. She knew she couldn’t stop now. Sucking in a deep breath, she bent and hit the lock hard. The ringing sound was loud in the quiet serenity of the garden. The metal dented and with another few solid whacks the lock gave.

Shivers of excitement tingled along her skin. Gently, she eased up the lid.