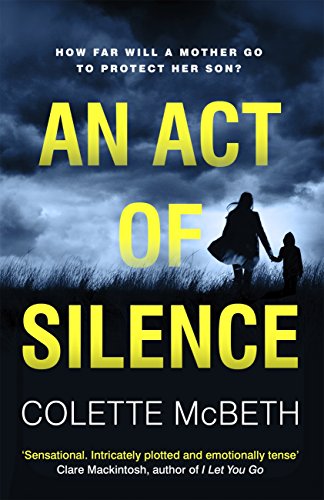 The next of my #20BooksofSummer is the brilliant An Act of Silence by Colette McBeth. Linda Moscow was a high flying politician, once Home Secretary, who was disgraced when allegations about corruption came to light. Her son, Gabriel, is a famous comedian. almost as famous for lurid tabloid revelations about his love-life and drug taking. Linda’s loyalty is stretched to its limit when he is accused of murdering a young woman he has spent the night with. She wants to believe him, but she’s not sure just what he is capable of and now he has disappeared. As a mother, she will do anything for her son but this time secrets from her past may come back to haunt her and even threaten her life.

One of the main themes is a very topical issue and handled with great sensitivity. One of the characters is what you would call a ‘National Treasure’ and has been accused at various times of child sexual abuse. As the story develops, the reader sees the level of cover-up involved both at the time and in the present day. Reading the story from the viewpoint of the victim who felt so helpless, guilty and betrayed was quite moving.

This book was very cleverly constructed. It moves back and forward in time with each part filling in a little more of the puzzle. Quite often, the reader sees the same scene (or part of it) played out through another character’s eyes, adding another perspective and a deeper understanding of events. There were lots of revelations throughout the book too, so that quite often I didn’t know who I could believe or trust. There was so much corruption, lies and deceit. It was hard to tell which of the narrators, if any, were reliable.

Some of the characters were put in such difficult situations that they just couldn’t see a way out of, they had impossible choices.  I had initially despised  some of the characters but came to see some good in as they tried to redeem themselves. Others, however, proved irredeemable. During the last chapters of the book it was really fast paced, edge of the seat reading!

An Act of Silence was a perfectly paced, tense and gripping read and one of the best psychological thrillers I’ve read recently. I highly recommend it.

My thanks to Millie Seaward for my copy of this book. An Act of Silence will be published by Wildfire Books on 29th June in hardback and as an e-book. The paperback will follow in January next year. You can buy it from all good bookshops or order a copy online here: An Act of Silence

These are the facts I collect.

My son Gabriel met a woman called Mariela in a bar. She went home with him. They next morning she was found in an allotment.

Linda Moscow loves her son; it’s her biological instinct to keep him safe. But if she’s not sure of his innocence, how can she stand by him? Should she go against everything she believes in to protect him?

She’s done it before, and the guilt nearly killed her.

Now, the past is catching up with them. As old secrets resurface, Linda is faced with another impossible choice. Only this time, it’s her life on the line…

Colette McBeth had the idea for her first novel Precious Thing in 1998. Instead of writing it she went to work for the BBC where she spent 10 years as TV reporter. In 2011 she enrolled on the Faber Academy Novel Writing course and completed Precious Thing in 2012. She lives in West London with her husband and three children.