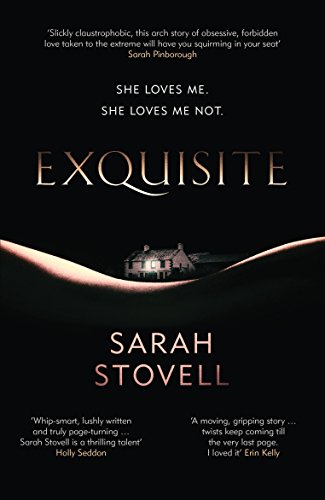 That sinister cover gives just a hint of what is inside – dark and light. But is the aptly named Alice Dark the darkness and Bo Luxton the light –  lux=light doesn’t it? Well frankly, I’m not sure and neither will you be if you read this book about obsessive love. Bo Luxton is a successful author with several bestsellers under her belt. Alice is an aspiring writer who meets Bo at a writing course Bo is leading in Northumberland. There is an immediate connection between the two, more than just student and teacher, which continues after the course.

It is going to be quite difficult to talk about this book without giving something away! The structure of the book is very clever. Initially chapters alternate between the two characters, then there is a large section from one point of view, then from the other character’s point of view. I’m carefully not saying which is which! Scattered throughout, are short chapters narrated by either Bo or Alice who is in prison. The question is which of the women is this narrator? The connection between the two women builds up throughout the story to create a really intense atmosphere, almost claustrophobic relationship. I was cleverly led to believe one thing when all of a sudden my whole perspective was dramatically altered. I found myself looking back to see if I had missed anything but the author had masterfully guided me to think one thing then turned everything on its head. Who then was I to believe – Bo or Alice or neither of them?

I was interested that both the women were damaged individuals from broken backgrounds who were desperately seeking the love and acceptance they had not received in their childhoods. In a way, they both acted like children with their manipulation, trying to cover up their mistakes and misdeeds by lying. Both characters were full of flaws and frailties. Like children, they both had that tendency to become fixated and obsessed.

The author brilliantly conveys this story of obsessive love and its fallout, and will make you question who and what you can believe even when it is in front of you. Right to the end you will have questions and you may find they are not all answered, leaving you to come to your own conclusions. When I had completed the book, I went back and re-read several sections with fresh eyes and of course was able to read more meaning in them. It’s a tense read with an undercurrent of danger bubbling just below the surface throughout. Exquisite is an highly addictive domestic noir tale which I couldn’t put down.

My thanks to Anne Cater and Karen Sullivan for my copy of the book and inviting me on the blog tour. Exquisite was published by Orenda Books on 15th May in both paperback and ebook form. You can order a copy online here: Exquisite

Bo Luxton has it all – a loving family, a beautiful home in the Lake District, and a clutch of bestselling books to her name. Enter Alice Dark, an aspiring writer who is drifting through life, with a series of dead-end jobs and a freeloading boyfriend. When they meet at a writers’ retreat, the chemistry is instant, and a sinister relationship develops … Or does it? Breathlessly pacey, taut and terrifying, Exquisite is a startlingly original and unbalancing psychological thriller that will keep you guessing until the very last page.