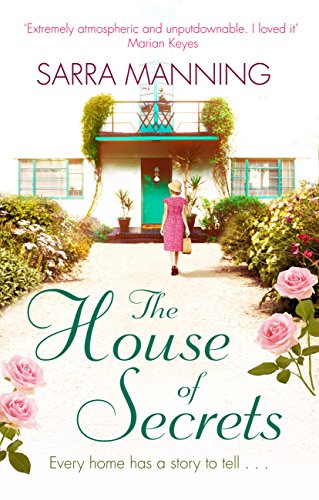 I read Sarra Manning’s After The Last Dance last year and thoroughly enjoyed it. If anything, I enjoyed The House of Secrets even more. Like After The Last Dance it focuses on two different eras, two different women and the house which connects them. I love dual time-line plots with a bit of a mystery about this so this book was just perfect for me.

Both the main characters, Libby in the 1930s and Zoe in the present day, have suffered loss and are trying their best to move forward. Zoe and husband Win have bought a large run-down house in London and hope working on the house together will be the fresh start their relationship needs. Rather mysteriously, the house hasn’t been lived in since it was built. Zoe finds a suitcase in the house which contains intriguing items such as a few baby clothes, a wedding dress and a diary. Zoe begins to read the diary and finds it belonged to Libby. Discovering they have experienced similar sad situations, Zoe is determined to find out what happened to Libby, hoping that they will both find happy endings.

I was just as keen as Zoe to find out what happened to Libby and happily, as a reader, I was able to find out much more than Zoe was able to glean from the diary. The story was told from both women’s points of view as the focus moved back and forward from the present to the 1930s. It was perfectly paced and written in a way that had me wanting to keep on reading to find out what happened next for each woman. Sometimes I found Zoe to be judgemental towards Libby but of course, she didn’t have the advantage of knowing the whole story, just her assumptions from Libby’s diary. I enjoyed both women’s stories equally, finding them to be very believable and both rather brave in different ways. I must just mention that Beyonce was an excellent addition to the story. Yes really, you’ll need to read it to see what I mean!

I confess to having something in my eye at some points but there were most definitely smiles too. The House of Secrets is a lovely book about not losing hope, believing in love and second chances.

My thanks to the publishers Sphere for my review copy via Netgalley. The House of Secrets is available now as an e-book (and currently only 99p for Kindle – click here to order) and will be published in paperback on Thursday 10th August.

An ordinary house on an ordinary street, built in 1936 and never lived in. Its rooms might be empty, but this house is full of secrets.

When Zoe and Win, raw and reeling from a recent tragedy, move into their new home it’s meant to be a fresh start and a way to mend the holes in their relationship.

But pushed to the back of a cupboard is a suitcase that’s been gathering dust for eighty years. Inside is a wedding dress, letters and a diary all belonging to a woman called Libby. And there’s something else in the suitcase, something that echoes Zoe’s own pain.

Zoe follows Libby’s trail from Paris to Spain on the brink of Civil War to secret trysts in London, and as Libby finds the courage to live and love again, Zoe begins to let go of her own grief.

But when Libby’s story takes a darker turn, Zoe becomes increasingly obsessed with discovering what really happened all those years ago. Because if Libby managed to get her happy ever after then maybe Zoe and Win can too . . .