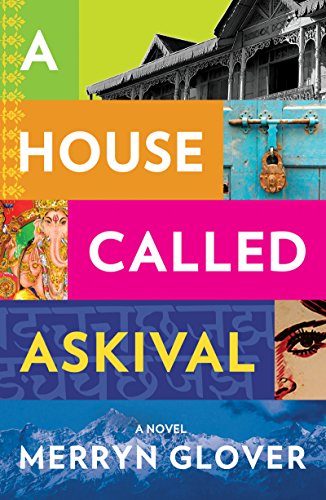 A House Called Askival tells the story of three generations of an American family living through turbulent times in India and is as colourful as its cover suggests. In a few days it will be 70 years since Indian independence from Great Britain and the violence that followed during the Partition of India and Pakistan. I have always been really interested in how people from Britain – or in this case America – adapted to life in such a culturally different place. My Grandad was in the Forces and spent some time in Rawalpindi (now in modern day Pakistan) between the wars and I always think it must have been such an alien place for him, a young man from Edinburgh, but also an amazing experience. I don’t know much about his time there sadly but am hoping to find out something from my aunt.

Anyway, onto the book. The story begins with Ruth Connor returning reluctantly to an India she left over 20 years before. Her father is gravely ill and she is going back to spend his final days with him. Ruth was always the rebel in the family, knowing she came a poor second to her parents’ work in hospitals in and mission work. In his turn, her father James was the son of American missionaries and lived through the turbulent times of Indian Independence and Partition. This is an epic story which covers almost 70 years of India’s history in a very compelling and emotionally engaging novel.

Merryn Glover’s novel transported me to India. So vividly does she write about the colours, the smells, the sights, the tastes that as I was reading I genuinely had a sense of being right there with Ruth and James. The real events described through the eyes of her fictional characters made those events truly come to life. The author does not shy away from honest depictions of the horrors and atrocities carried out by all sides in the bloodshed following Independence and also in the anti-Sikh riots of 1984, experienced by a young Ruth. Yet it is clear that even in those troubled times, there was also great humanity shown by people of all religions, often to those considered enemies.

As well as covering the historical aspect of Indian life, A House Called Askival also examines the relationships within families, the expectations, perceived betrayals, the hurts and forgiveness. James and Ruth have a very complex relationship and it was poignant to read about them finally beginning to come to terms with their past differences and express their love for each other. The relationships between the Indians the family employed, worked with and were friends with were also convincingly portrayed, and again these relationships could be fraught and complicated.

A House Called Askival is a wonderfully involving, moving and enlightening novel. The sense of time and place is so well depicted and the characters are perfectly drawn. While I was reading, I felt as though I was living through the traumas and triumphs alongside the characters. It reads as a moving tribute to India with its struggle for peace and independence echoed in the characters’ lives too.

A House Called Askival will be re-released on Kindle at midnight on the 14th/15th of August, which is the 71st Anniversary of the Independence and Partition of Pakistan and India. You can order a copy online here.

An elegant, moving and heartfelt love letter to the sights, sounds and tastes of northern India told through the enthralling story of the troubled relationship between a father and daughter stretching from Partition to the present day. James Connor is a man who, burdened with guilt following a tragic event in his youth, has dedicated his life to serving India. Ruth Connor is his estranged daughter who, as a teenager, always knew she came second to her parents’ missionary vocation and rebelled, with equally tragic consequences. After 24 years away, Ruth finally returns to Askival, the family home in Mussoorie, a remote hill station in the Northern State of Uttarakhand, to tend to her dying father. There she must face the past and confront her own burden of guilt if she is to cross the chasm that has grown between them. In this extraordinary and assured debut, Merryn Glover draws on her own upbringing as a child of missionary parents in Uttarakhand to create this sensitive, complex, moving and epic journey through the sights, sounds and often violent history of India from Partition to the present day.

One thought on “A House Called Askival by @MerrynGlover #review”