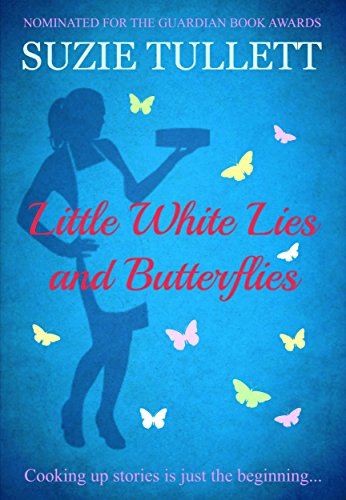 I really enjoyed Suzie Tullett’s The Trouble With Words (you can read my review here) and am pleased to be able to share an extract from her latest novel Little White Lies and Butterflies. This is published by Bombshell Books and is available in both paperback and e-book formats. I do have a copy of the book but haven’t had time yet to read it. Watch out for my review in the next few weeks. If you’d like to buy a copy you can do that online here: Little White Lies and Butterflies

First of all – what’s the book about?

Lydia knows first-hand that ‘having it all’ isn’t everything it’s cracked up to be.

As far as she’s concerned, when it comes to job versus family, it’s a case of one or the other. And whilst most women her age have spent years climbing the corporate ladder, she’s made a career out of bagging her perfect man. Now, nearly thirty and still single, Lydia wonders if she’d made the right choice.

Realising the time has come to take stock, she goes against her family’s wishes and decides to travel, in the hope of finding a new direction. At least that’s the plan.

So when Sam comes along, she decides to tell a little white lie, re-inventing herself as a professional chef – not exactly the best new identity for a woman who can’t cook. But the truth can’t stay hidden for long and when her family show up unexpectedly things go from bad to worse…

Can Lydia find love? Will she ever learn to cook?

Little White Lies and Butterflies is a heart-warming comedy about finding your place in the world.

From outside the dance circle, you sing lots of songs.

‘That’s it!’ I announced, having just landed at Mum and Dad’s house for our customary Sunday lunch gathering. ‘My life as I know it is officially over!’

I paused, waiting for that all important condoling response. Daft enough to expect at least a modicum of sympathy from within the bosom of my family, I quickly realised I should’ve known better. The Livingstons didn’t do compassion.

Instead, Mum appeared with a mass of cutlery, her arm outstretched as she thrust it my way. ‘If you wouldn’t mind,’ she said, pointing me in the direction of the dining room table.

Mum headed back into the kitchen, leaving me no choice but to get on with it. However, as I spotted Dad already seated and eager to eat, I did suppose the woman needed all the help she could get. Certain members of our family had always preferred a more observational role when it came to mucking in with the household chores; Dad was a prime example of this.

‘Oh, yes,’ I continued, regardless. ‘My dreams have finally been crushed, once and for all.’

I began laying the table, sucking myself in as I squeezed behind my somewhat unaccommodating father, a man more concerned about his belly’s grumblings than those of his beloved offspring.

‘Leaving me no choice but to think about joining a convent,’ I carried on. ‘Where I shall, no doubt, remain for the rest of my days.’

‘Things didn’t go too well, then?’ asked Mum, suddenly re-emerging with a stack of plates, eager to get the task at hand done and dusted.

Not that I minded her hurrying me along in my moment of distress. After all, everyone knew it paid dividends to have everything organised and in place before brother number one, Steve, and his wife, Jill, arrived with their not so adorable kids in tow. Although, to be fair, it wasn’t so much my sullen fifteen-year-old niece who created cause for concern – texting, tweeting Tammy, as I liked to refer to her – but more my yet to be diagnosed ADHD suffering little nephews, eight-year-old twins Luke and Johnny.

‘The trouble with you, Lydia,’ Dad joined in, although just to clarify, by that I mean with the conversation and not the workload, ‘is you’re far too picky.’

I watched him fold his arms as if he’d just imparted some piece of crucial advice. Obviously, a chap who wants nothing but the best for his one and only daughter. Although at the same time, I did have to acknowledge he wasn’t exactly the first person to suggest I might be setting my sights a little higher than was good for me. Unrealistic, for want of a better word.

‘Too ugly, you mean,’ corrected a rather bedraggled Pete, brother number two, as he appeared in the doorway – a man who needed to choose his words a little more carefully in my view, especially when I still had a couple of knives in my hand.

‘Do the words pot, kettle and black mean anything to you?’ I asked.

He plonked himself down at the table and, yet again, I found myself understanding why his long-suffering girlfriend had finally decided to kick him to the kerb, sending both him and his belongings back home to Mummy.

‘If you must know,’ I said, getting back to the more important issue under discussion. ‘This one met all the necessary criteria. He even asked if he could see me again.’

Mum suddenly stopped what she was doing. ‘So, what’s the problem, then?’

She had spent years listening to me recount the events of one disastrous date after another, all the while harping on about not settling for second best and bagging my perfect man by the time I hit thirty, so I understood her surprise. The way I’d gone on I should’ve been chomping at the bit to book the church for the wedding by now, or at least be sending the invitations out for the engagement party.

‘Well, I can’t be sure,’ I ventured. ‘But I think this one had some sort of medical condition.’

I forced myself to put the last of the knives down. ‘No. Not exactly.’

Mum handed me half her pile of plates.

‘What do you mean? Not exactly?’ Dad laughed, as usual failing to take my quest at all seriously.

‘And did you ask him about it?’ enquired Mum. ‘It might’ve been curable.’

‘No, I didn’t!’ I replied. ‘Just because he wasn’t The One doesn’t mean I’d want to hurt the guy’s feelings.

‘Besides, that’s not the point, is it?’ I continued. ‘If I start making concessions now, just because time’s running out, all the other naff dates will have been for nothing. And in that case, I may as well have just married a fool like him from the off,’ I indicated to my not-so-darling brother, ‘and have been done with it years ago.’

Mum rolled her eyes, probably picturing me as an ageing spinster for the umpteenth time, spending my twilight years with nothing but a room full of cats for company. ‘I blame all those silly books you read,’ she said. ‘Putting ideas into young girls’ heads like they do. They’re just not realistic.’

‘I’ll tell you what’s not realistic,’ I replied. ‘Women who think they can have it all.’

Dad threw his head back and groaned. ‘Here we go again,’ he said, failing to realise he’d been proving my point since the day I was born.

‘Just look at you, Mum – you work all the hours God sends, then come home and run around after these two, because heaven forbid they should have to do something for themselves.’

‘There’s nothing wrong with a woman having a career, Lydia,’ she replied.

‘No, there isn’t. And there’s nothing wrong with having a family either. As for having both—despite what everyone preaches, what everyone’s always preached, you of all people know it isn’t everything it’s cracked up to be.’

Still, in my experience it didn’t matter how often I tried to explain. When it came to the career versus family argument I knew they’d never be able to understand why, well into the twenty-first century, I’d find it acceptable to choose one over the other. Why I’d choose domesticity over a job.

Then again, thinking back to the couple of hours wasted on the latest, and as it turned out blinkingly challenged, conjugal contender, I had to admit this was something even I was beginning to question.

‘Not that I suppose it matters now, anyway,’ I reluctantly conceded. ‘Which is why you’ll all be pleased to know I’ve finally decided to take stock.’

The relief on Mum’s face was immeasurable, no doubt because she was glad to hear her next set of grandchildren weren’t going to be of the feline kind, after all. ‘Well that’s something, I suppose,’ she said.

‘Yes, well, before you all go and get your hopes up too much, just because I’m abandoning my mission doesn’t mean I’m about to enrol on some course and get myself a proper job, as you lot call it! No, siree. Instead, I’m going to banish myself to a distant land and head off into the wild blue yonder.’ I threw my arm out in a dramatic gesture. ‘A place where I can reassess my situation and decide where to go from here.’

‘I knew it was too good to be true,’ said Dad, obviously viewing my assertion as another of ‘those melodramatic tendencies’ he’d always thought me prone to.

‘What do you mean?’ asked Mum. ‘Take yourself off into the wild blue yonder?’

I got back to laying the table. ‘Well, if I’m not going to use my wedding fund for an actual wedding,’ I explained, ‘I might as well put it to some other good use. And I think a bit of time and space away from everything is just what I need right now.’

‘And when do you plan on going?’

‘But you can’t,’ interrupted Mum. ‘What about your birthday? I’ve already ordered the cake.’

‘I’ve decided I’m not celebrating it this year,’ I replied. ‘Being thirty and still single isn’t exactly something I want to shout from the rooftops, is it? Not after everything I’ve been through.’

‘Now she really has lost her marbles,’ said Dad.

‘That’s if she ever had any to begin with,’ said Pete.

Suzie Tullett is an author of contemporary humorous fiction and romantic comedy. She has a Masters Degree in Television & Radio Scriptwriting and worked as a scriptwriter before becoming a full-time novelist. Her motto is to ‘live, laugh, love’ and when she’s not busy creating her own literary masterpieces, she usually has her head in someone else’s.

Suzie lives in a tiny hamlet in the middle of the French countryside, along with her husband and two Greek rescue dogs.