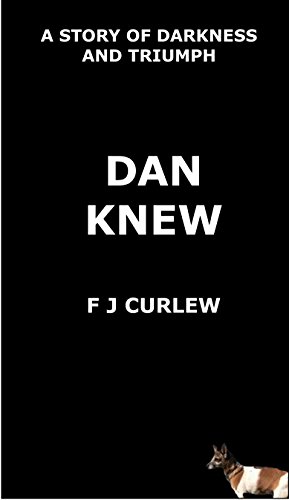 I’ve got a great guest post for you today as part of the Dan Knew blogtour. Dan Knew is a fictionalised account of author FJ Curlew’s travels told through the eyes of Dan, her rescued Ukrainian street dog. Below she shares just how she managed to write using Dan’s voice. At the end of her guest post you’ll find lots of information about the author and her books.

Writing from the point of view of a dog.

When I began writing ‘Dan Knew’ I had just lost him and it was incredibly important to me that I kept it true to him. The voice, the story, everything. Of course, he was a dog so it could only ever be as I imagined. Him through my eyes.

The voice was easy to slip into. I had been talking on his behalf for years (I know. It’s just what I do with my dogs and there are many of us. No, really, there are!). As I wrote I found myself developing “Dan Speak.” There were Danyisms that just happened. “He made his sorries and she made her forgivings,” and the like. They flowed naturally so I knew that they were right, it worked. I got so caught up in it that I still find myself inadvertently slipping into his voice during casual conversation! Then I have to explain to the person I’m talking to that it’s okay, I’m just speaking in the voice of my deceased dog – hmm…

More challenging was sticking to the point of view of a dog. I wasn’t giving Dani intellectual powers like Enzo from ‘The Art of Racing in the Rain,’ (whose story captivated me) or the vocabulary of Buster from ‘Buster’s Diaries’ (who made me gleefully giggle!). I loved both of these books but no, this was just Wee Dan in an innocent voice. The language had to be kept basic and there was no room for elaborate word usage or descriptions. Reining that in was difficult when I had come up with a beautiful piece of flowing language but I knew I couldn’t use it. Heavy sigh. Keep it simple, keep it simple had become my mantra.

A good deal of the story is about travelling to new countries and I really wanted my readers to be able to get a feel for each place we were living in. The tranquillity and beauty of Estonia, the harsh realities of life in Ukraine, the quirkiness of Lithuania. How could I show my readers life in a foreign country through my wee dog’s eyes? What could he see, smell, sense, that would give the readers an insight into the uniqueness of each place? Into what makes them special?

The use of overheard conversations helped but in general I had to stick to basic descriptions, smells and feelings and doggie things. What would he have thought about each new place? What differences would he have picked up on? Language? Food? Buildings? The air of a place? I was constantly asking myself, “What would he have noticed, thought, felt?”

It is one of the things I particularly enjoy about being a writer – getting into the head of my characters, climbing into their skin, living their lives. This was a dog but I treated him in the same way as I do all of my characters. Become them. No, I wasn’t walking around on all fours, sniffing at the ground, but you get my drift! Of course he had an advantage over my fictitious characters because I like to think I knew him really well.

And then there was what was happening in my life. I was married to an alcoholic and I had a devastating battle with cancer. Dan witnessed some things I wish he hadn’t. But they were central to his life as well as mine so I had to touch on them, show them as I imagine he would have seen them. I didn’t go into too much detail here. It was Dan’s story after all. Not mine. Just enough, I think, I hope!

It was writing as him that helped me get through the darkest of times and I became addicted to telling his story. It kept him alive, with me, for those precious extra months, and now I have that physical entity. His book. It will always be with me. Isn’t that special? I think so. And now our story is timeless, endless, travelling off to wherever its readers live. A little bit of Dan is out there. As a friend of mine said recently, “Yes, Dan loves on.” I like that thought.

Fiona dropped out of school aged 15, because being the consummate rebel, she hated it! After becoming a single parent she decided to return to education, graduating in 1996 with an honours degree in primary education. Ah, the irony!

As soon as she graduated she packed everything she owned into her Renault 11, including her daughter, two dogs and a cat, and headed off to Estonia to become an international school teacher. After fifteen years of teaching, predominantly in Eastern Europe, she returned to the UK. She now lives on the east coast of Scotland with two Scottish rescue dogs and a disgruntled Portuguese cat.

Fiona is the author of two books:

To Retribution – A love story/political thriller set in times of turmoil.

Dan Knew – A fictionalised account of her travels told through the eyes of Dan, her rescued Ukrainian street dog.

A Ukrainian street dog is rescued from certain death by an expat family. As he travels to new countries with them a darkness grows and he finds himself narrating more than just his story. More than a dog story. Ultimately it’s a story of escape and survival but maybe not his.

The world through Wee Dan’s eyes is told in a voice that will stay with you long after you turn that last page.

The animals in this book are all real, as are their stories. The people’s names have been changed to protect their privacy. Fact or fiction? Well, dogs can’t talk, can they?