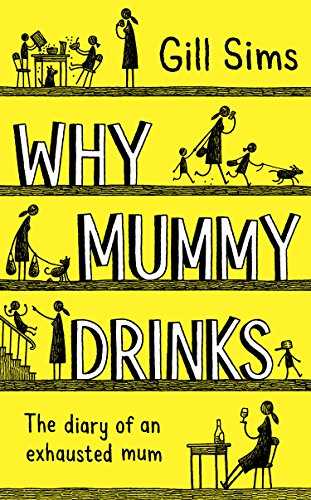 I can’t tell you how excited I was to find out that the woman behind the Peter and Jane Facebook page was publishing a novel. If you follow Peter and Jane you will already know how hilarious each post is as this exhausted mum tries to balance working, looking after the house and dealing with her ‘precious moppets’ and invariably ends each day with a drink of something and a photo of said drink – and Judgy Dog of course. The novel follows Mummy, Ellen, throughout a year and is written in the form of a diary as she tries to be more organised and less frazzled!

Why Mummy Drinks is the brilliant novel from Gill Sims, the author of the online sensation Peter and Jane.

It is Mummy’s 39th birthday. She is staring down the barrel of a future of people asking if she wants to come to their advanced yoga classes, and polite book clubs where everyone claims to be tiddly after a glass of Pinot Grigio and says things like ‘Oooh gosh, are you having another glass?’

But Mummy does not want to go quietly into that good night of women with sensible haircuts who ‘live for their children’ and stand in the playground trying to trump each other with their offspring’s extracurricular activities and achievements, and boasting about their latest holidays.

Instead, she clutches a large glass of wine, muttering ‘FML’ over and over again. Until she remembers the gem of an idea she’s had…

This is one of the funniest books I have read for ages. Every page genuinely raises at least a smile if not a spluttering laugh! My own ‘precious moppets’ are now well past the age of Peter and Jane so I no longer have the morning rush of getting them ready for school, gently ‘encouraging’ them to find the clothes they say are nowhere to be found but are actually exactly where they left them and finding a crushed up note in the bottom of the bag advising that it is National Book Day and can they come dressed as an animal character from a book….. Oh yes, it’s all coming back to me – I feel your pain Mummy! No wonder she mutters FML so often. Alcohol plays a large part in getting Mummy through her evenings, especially on FIAF. (I’m not going to say what either of those stands for but let’s just say that one of the Fs features VERY frequently in Mummy’s vocabulary!)

In the book Mummy is constantly thwarted in her efforts to have well turned out, well rounded children who she has delightful little chats with and goes on lovely walks in the countryside with. They won’t eat her lovingly prepared healthy food, look in horror at the idea of improving visits to art galleries etc and Daddy (otherwise known as Gadget Twat) longs for a ‘simple lasagne’, little knowing how much effort it takes to make said dish. His plaintive cries when failing to cope with his little dears if Mummy is out for a while made me laugh and I think that many stay at home parents will recognise the other parent not really understanding just what they do all day with the children. It’s not all sitting about having coffee with the other mums!

Why Mummy Drinks is due out just in time for the October half term holiday – not that any Mummy will have time to read it then as she’ll be busy occupying her little darlings – ie spending a fortune on visits to museums, leisure centres, cinemas and so on – but do buy it anyway to read when you get a spare minute. It’s a book that’s easy to dip in and out of with its diary style entries. I am sure that any parent will recognise themselves or their children in the book though I’d just like to point out here that I definitely did not have the copious amounts of wine and gin which Mummy drinks. Oh and eleventy billion is definitely my favourite number!

My thanks to Polly Osborn at Harper Collins for my review copy of this book. Why Mummy Drinks is published on 19th October in hardback and as an e-book. You will be able to buy it in all good bookshops or can pre-order online here.

15 thoughts on “Why Mummy Drinks by Gill Sims @whymummydrinks @HarperCollinsUK”