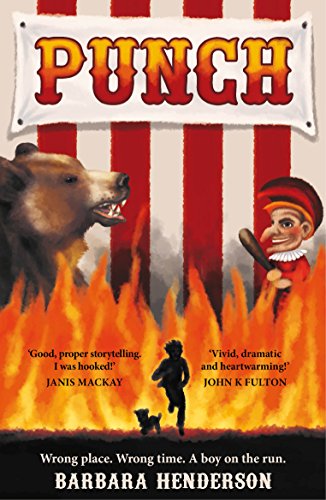 I’m delighted to be kicking off the blogtour for Barbara Henderson’s latest children’s novel, Punch, which will be published on 23rd October. Punch is aimed at 8-12 year olds but can, of course, be enjoyed by other age-groups too. I read her excellent debut novel Fir For Luck last year and you can read my review of that here.

First of all, what’s this book about?

Wrong place. Wrong time. A boy on the run.

THE MARKET’S ON FIRE. FIRE! FIRE! THE BOY DID IT!

Smoke belches out through the market entrance.

I turn and run.

When 12-year-old Phin is accused of a terrible crime, his only option is to flee. In the unlikely company of an escaped prisoner and a group of travelling entertainers, he enters a new world of Punch and Judy shows and dancing bears.

But will Phin clear his name?

And what can he do when memories of a darker, more terrible crime begin to haunt him?

Punch begins with an exciting chapter as 12 year old orphan Phin is accused of starting a catastophic fire in Inverness Market. Feeling no-one will believe his innocence and the real story, he runs and is soon caught up in all kinds of danger and adventure. This sense of excitement doesn’t let up throughout the book making it a real page turner.

Barbara Henderson vividly describes her characters so that children will easily be able to visualise what they look like, what they wear and how their surroundings appear. There is a real sense of a different era, yet not so different that it will seem alien to young readers. The similarities between themselves and the young characters in the book should mean that the readers can imagine themselves in such dangerous and thrilling situations but from the safety of their 21st century lives. All the emotions experienced by Phin are, of course timeless, so children will be able to identify with his fear, his confusion, his sense of injustice and his excitement too.

There is a theme throughout about who can be trusted and how much can Phin rely on his own instincts. In difficult situations he is aided by the very people who would generally be considered the least trustworthy – an escaped prisoner and travelling folk – yet he recognises the good within them. He knows what it’s like to be falsely accused so is perhaps more likely to give people the benefit of the doubt.

Throw in secrets from the past, puppetry and a bear and you have all the ingredients for a gripping and exciting story for young people. And a story which I feel will be enjoyed by any adults reading aloud to those young people too.

My thanks to publisher Pokey Hat (an imprint of Cranachan Books) for my review copy of the book. Punch will be published on 23rd October in e-book and paperback format. It should be available in good bookshops or you can order a copy online here.

Follow the rest of the blog tour at the blogs below