I’m really pleased to welcome local author John Mayer today. John is the author of the popular Parliament House series featuring Scottish Advocate, Brogan McLane. You will find lots of information about the books and how to buy them below, but first let’s hear about the man behind the books.

Thanks for joining me John, would you tell me a little about yourself?

I think of myself as a life-long second class citizen. I was born in the scummy part of dockside Glasgow and soon moved down the social scale. Although I was a bright boy, I never thought I’d live very long. People around me in Glasgow in the mid-fifties and early 1960s kept getting murdered and my best friend hung himself in Barlinnie Prison when I was only 15. I walked out of school when I was 14 because I wasn’t being taught, I was being herded. I’ve always been very ambitious. When I started my apprenticeship as a mechanical engineer, it didn’t take me long to become the youngest member of the Institute of Mechanical Engineers in Scotland. When I walked out to become a record producer, it didn’t take me long to produce Number 1 records in the American Reggae Charts and the UK Heavy Metal Charts. But I always wanted to be a lawyer. I worked for eight years to become an Advocate in the Supreme Courts of Scotland in Parliament House. But as soon as I was in, I realised that there was quite a lot of low life in high places. I could beat these guys in court, but they always treated me like a second class citizen. What they didn’t know was that was where I felt most comfortable and just went on beating them. I’m very proud of many of those wins. I was responsible for bringing South Africa into the group of nations which applies the International Treaty Against Child Abduction and of course, I’m the first lawyer in the world to have proved that nuclear weapons are illegal under International Humanitarian Law. I’ve co-written a few law books and been published in hardback non-fiction. In 2002 I underwent a ten-week USA publicity tour on which my biggest audience was over 40 million people: to American Schools Radio. Great fun. Now I write the Parliament House Books.

I’ve always written stories. But I guess the Parliament House Books arise from a deep desire to show the world how much injustice is built into justice systems. No justice system is perfect, but the one I worked in was choc-a-bloc with prejudice, presumption, back-room deals and overall unfairness. Here’s an example. My client had her children stolen from school in the middle of the day. The kids were sold – yes, sold for money – and removed from their country of origin. That’s against about eight or nine international laws, some of which I helped write. When I got my client to the UK and a Hearing on the matter in Parliament House, the judge brought me into his Chambers and said ‘These children are better off where they are. So I’m allowing you to ask 12 questions. No more.’ When I said that was illegal and asked why he was doing this, he threatened to report me for insolence. So I asked if the 12 questions included her name and address. He went ballistic. In response I said that if I was restricted to 12 questions, then those two made a huge difference. The case was a sham and the woman was denied her children and committed suicide a year later. The lesson of that case was that injustice kills women. That case and several others are what started me writing the Parliament House Books.

Well I’ve written newspaper articles, journal articles, law books and was Scottish Legal Editor of Clinical Forensic Medicine. My non-fiction work, Nuclear Peace was published in hardback and I did publicity all over the world for that book.  Also, some of my legal writings are published in case books and will therefore last forever.So I’m no stranger to publication. However, writing fiction is a new skill for me and one which took a few years to get right. I’m very happy to say that my Amazon Reviewers think I write very well. 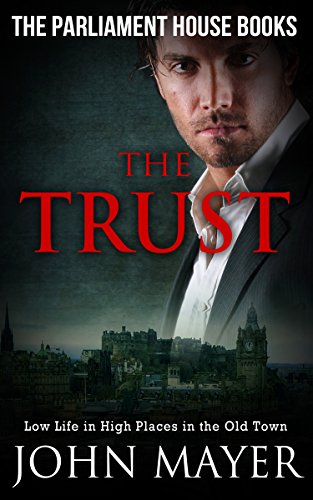 Trust. (Is that short enough?) Actually, more accurately it’s about breach of trust and how public trust can be completely destroyed and they don’t even know it until it’s too late.

The same way all of the Parliament House Books are titled. I start with one word. Such as Trial / Cycle / Order / Bones etc. Each one is a legal idea which I develop in my own creative and intellectual way into a story to which only I know the ending. That way, it’s impossible to second-guess my plots because there are no plots, plans or trickery. there’s only the story which I hope is interesting and engaging all the way to the end. I don’t write like anyone else. I just write like me.

When the first novel in the Parliament House Books titled The Trial was published, I ate a very good dinner, got drunk and went to bed. I didn’t want to see or hear any criticism; that could wait for the next day. I awoke to some encouraging early sales and later got some very good reviews.

The House is the next book in the Parliament House Books series. I’m 40,000 words in and the story is percolating nicely in my head.

I’d take The Catcher in the Rye by the great J.D. Salinger. the first time I read it, I was screaming into the pages at the end.

I’d very much like to see my own Nuclear Peace made as a movie. I think the world needs such a movie right now. I have no idea about film stars but I do know you need one to make a hit movie.

I’d be a friend to Josef K in Franz Kafka’s brilliant book about injustice called The Trial. I’d be there when he was subject to illegal search and arrest, I’d know where to find him in the state’s secret jails and be able to support him in his time of need – who knows, maybe even be his lawyer!

Below, thanks to John’s wife Lizzie, are buying links and all John’s social media and contact links

John Mayer was born in Glasgow, Scotland, a war-zone where violence and poverty reigned. In 1963 when he heard The Beatles on Radio Caroline, he decided to change his life. Aged 14 he left school because, in his opinion, he wasn’t being taught. For the next year, in all weathers, he cycled 9 miles to and 9 miles from the Mitchell Library in central Glasgow where he devoured books of all kinds and began to understand what more the world had to offer. He became an Apprentice engineer, and soon was teaching men twice his age. In the early 1970s his love of music led him to set up as a Record Producer. He built his own record company trading in 14 countries. After a disheartening court battle with global giants, he left the business world and went back into further education at the University of Edinburgh, becoming an Advocate in the Supreme Courts of Scotland. There he acted for the downtrodden and desperate as well as Greenpeace International. His specialism was in fighting international child abduction.

John has written non-fiction, legal texts and articles; broadcast to tens of millions of people on US and UK radio, appeared on TV and in print media.  Since retiring from the Law, John has enjoyed using his years of very colourful experience to create The Parliament House Books series.

The Trial is the first full length novel in this series. Set in Edinburgh and Glasgow, it is more than a nod to Franz Kafka’s book of the same title. The Trial sees crusading Scottish Advocate, Brogan McLane, fight injustices so casually delivered by Low Life in High Places in the Old Town.The Trust is the fourth full length novel available November 3rd. Nuclear Peace, John’s non-fiction work describing the inspiring adventures of The Trident Three following shortly.