Today’s Christmas treat is a lovely story about an animal you might not normally associate with Christmas – Father Christmas’s Cat. This story is by Vivien Brown, author of Lily Alone (more information about that below), and it also features a really lovely illustration by Vivien’s daughter, Laura Hampshire

Okay, so you won’t have heard of me. I know that. Nobody ever has. It’s the reindeer and the robins who get all the glory at Christmas, isn’t it? Their smug faces plastered all over the cards and wrapping paper. Little effigies of them dangling from the Christmas trees. All red noses and red breasts, prancing about in the snow and glitter. But, let’s face it. Who needs all that red, just because it’s Christmas? The boss wears a red suit, I’ll grant you that. But it’s hardly the way to stay inconspicuous if you’re trying to sneak about on rooftops at night, is it? I’ve tried telling him, but will he listen? No! Black – that’s the only way to stay invisible in the dark, and I should know. I’m black myself, you see. Well, almost. I’ve got a white patch under my chin, and two white paws, but I can hide those quite well if I have to.

Let me introduce myself. My name’s Sweep, and I’m Father Christmas’s cat. And it’s animals like me who are the real heroes of Christmas, doing our bit behind the scenes, while Rudolph and his chirpy little feathered pals flash their red bits to get themselves noticed and take all the credit. I’ve lost count of the number of times a horse has had to shove the sleigh out of a snowdrift, or a pigeon out for a night on the tiles has tugged the boss out of a chimney when he’s eaten too many mince pies. And then there are the turkeys who lay down their lives, Christmas after Christmas, just to make people happy… and what thanks do they get? None. So, what’s my role exactly? Well, I guess you’d call it of a domestic nature. Therapeutic, even. He certainly wouldn’t be the jolly old soul you all know him as if it wasn’t for me.

But let’s start at the beginning. The night he found me, I was just a kitten, curled up in a nice warm grate. He flew down the chimney, completely out of the blue, and almost landed right on top of me. There were soot clouds everywhere. ‘Ho, ho, ho!’ he said, bending down to peer closely at me. ‘And what have we got here?’ He picked me up in his great big hands and laughed, spattering his beard with specks of coal-black soot.

And then he noticed the silence. No furniture, no stockings above the fireplace, no tinsel, no children. Just an empty house… except for me. I’d heard the people talking about something called bailiffs that very morning, and then they’d all packed up in a rush and gone. It hadn’t worried me much at first. It was only when the fire went out and nobody came to feed me at teatime that I’d started to realise they weren’t coming back. I was on my own. Until the man in the big red suit turned up.

‘I think, little chap,’ he said, taking in the situation, ‘that you’d better come with me.’ And he popped me into his pocket and we were away, flying through the sky at breakneck speed, like there was no tomorrow. And of course there is no tomorrow as far as the deliveries are concerned. I know that now. It’s a one night only performance.

It was exciting that night, I have to admit, but I’ve never been again. Sleigh-riding really isn’t for me. All that bumping about, and stopping and starting! These days, I find I’m much more use to him at home. The last few weeks before the big day arrives are always particularly hectic. He’s so tired then that he never hears the alarm clock, so it’s up to me to wake him up. I find that padding up and down on his chest, with claws extended, usually does the trick, or sometimes I’ll give him a good face-lick. You’d think that would save him some time in the bathroom, but he still goes in there and has a proper wash. There’s no pleasing some people!

Then there’s breakfast. Sometimes he stumbles on the stairs, even though I’m wrapped around his legs, and we eat together. Porridge for him and tuna for me, although he was so sleepy one morning he swapped the bowls over. Yuck! Never again. Well, I think we both felt the same way about that!

During the day, when he’s with the elves in the workshop, I keep out from under his feet and have a little doze in the house, usually inside his slippers to warm them up for him. Then we eat together again in the evenings. He has steak and kidney pudding or pie and mash, and I have a little chopped chicken. Then I stretch out on his knees and he strokes me. I know he enjoys it. It de-stresses him after a hard day. And I do like to know I’m being useful. At bed-time, to keep his wife happy, he puts me in a little blanket-lined box on the floor, but I know he wants me on the bed really, so I jump up as soon as they’re asleep. On guard, just in case any mice turn up.

Come Christmas Eve, of course, the routine changes. He’s off out as soon as it gets dark and not back until morning. I stay indoors with Mrs Christmas, snuggled in her lap as a special treat for her, and wait for him to come home. And he’s exhausted when he does. The reindeer are let loose outside, and we go straight to bed. We sleep all day, nose to nose, whiskers to whiskers, and just for once there’s no need for an alarm clock, or for me to lick his face. It’s our one day off.

On Boxing Day he’ll start making the toys for next year, and I’ll be back by the fire, warming my paws. It’s an ordinary sort of a life, but it suits us both, and I’d have to say, if it wasn’t for Rudolph sticking his (shiny red) nose in every time we have our photo taken, it’s pretty much purr-fect! 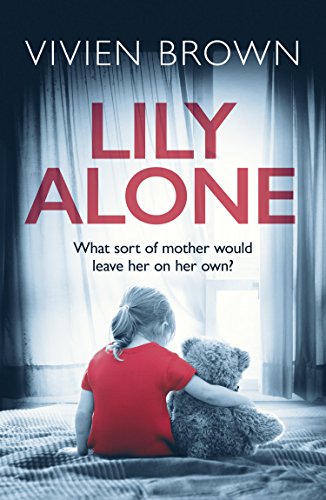 What sort of mother would leave her child all alone? A gripping and heart-wrenching domestic drama that won’t let you go.

Lily, who is almost three years old, wakes up alone at home with only her cuddly toy for company. She is afraid of the dark, can’t use the phone, and has been told never to open the door to strangers. But why is Lily alone and why isn’t there anyone who can help her? What about the lonely old woman in the flat below who wonders at the cries from the floor above? Or the grandmother who no longer sees Lily since her parents split up? All the while a young woman lies in a coma in hospital – no one knows her name or who she is, but in her silent dreams, a little girl is crying for her mummy… and for Lily, time is running out.

Lily Alone is published by HarperImpulse and is available in both paperback and ebook format. You can order a copy online here: Lily Alone