On the seventh day of Christmas I bring you a dark and intriguing tale from Virginia Moffatt author of Echo Hall which was longlisted for the 2015 Bridport First Novel Award. Echo Hall has just been published by Unbound and you can order a copy online via Unbound here or on Amazon here. You can find out more about the book further down the page.

The screeching of brakes outside heralded Fenella’s arrival.

‘About time,’ said Jenny as she marshalled her tiny shepherd and angel into the back seat of the car, strapping them next to the little Mary already sitting there.

‘Bloody work,’ said Fenella, ‘My meeting ran over. And then there were delays on the A415. Sorry.’

Jenny was about to protest that it was always bloody work. Till she remembered what that was like; how relieved she was when Alec’s promotion meant she could change her hours to suit school.  So she said nothing and climbed in the front, waving away a strong aroma of Coco Mademoiselle.

‘I do appreciate this,’ said Jenny. And she did. Ever since Alec had started needing the car on Thursdays, Fenella had been brilliant about taking the girls to Brownies. And now knew they would be on time for the play, she was able to relax and enjoy the excited chatter.

When they reached the Scout Hut, she was in a happy Christmassy mood, made even better by Alec arriving just as they stood up to sing, ‘God Rest Ye Merry Gentlemen’.

‘…let nothing ye dismay,’ she belted it out, enjoying one of her favourites.

‘Sorry I’m late,’ he whispered, as the carol came to an end ‘Traffic was hell on the A415.’ She was about to ask why he’d come that way, when she was distracted by the announcing angel. Soon she was transfixed by the sight of small children stumbling their way through the familiar story. The end, with the tableau of Mary and Joseph, surrounded by shepherds, angels and kings, had her weeping as it always did.

‘That was beautiful,’ said Fenella as they rose from their seats.

‘I know, sodding conference. I did manage to video it for him, but it’s not the same.’  Alec and Jenny nodded sympathetically, thanking her for the lift, before driving their tired offspring home.

It took an hour before the girls were settled in their beds. When Jenny came downstairs, Alec was in the kitchen cooking dinner to the sound of Christmas carols on the radio.

‘That was perfect for getting me in the mood,’ he said. ‘Oh, and there’s some Baileys in the car. I left it in the boot, with my coat.’ She smiled, picked up the keys and went outside.

It was when she picked up his coat that she smelt it, the unmistakeable aroma of Coco Madmoiselle.  And then she remembered – the A415 – why had he come back that way tonight?

‘Your coat reeks of perfume,’ she said, casually as she re-entered the kitchen.

‘…let nothing you dismay…’  the choir chorused on the radio.

‘Really?’ said Alec, with an equally studied calm, ‘I can’t think why…unless…I know…Sally at work drenches herself in the stuff. I gave her a hug before I left. That must be it.’

She glanced at the photos on the fridge, noticing for the first time, how close Fenella and Alec were standing in the picture of his birthday barbecue. Now she came to think of it, they were always close at parties. How had she not seen it before?

He smiled at her, completely at ease, confident in the knowledge that she trusted him, that she’d accept the lie, as she always did.

Well I don’t know about you, but I’d love to know what happens next. Did Jenny confront Alex and Fenella or did he get away with it for a bit longer? If you’d like to find out more about Virginia or her book, you will find her social media and other links below. 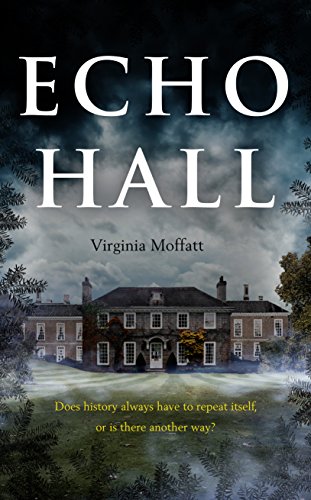 In the early nineties, newlywed Ruth Flint arrives at Echo Hall to find an unhappy house full of mysteries that its occupants won’t discuss. When her husband, Adam, is called up to the Gulf War, her shaky marriage is tested to the core.

During World War 2 Elsie Flint is living at Echo Hall with her unsympathetic inlaws. While her husband,Jack is away with the RAF, his cousin Daniel is her only support. But Daniel is hiding a secret that will threaten their friendship forever.

At the end of the Edwardian era, Rachel and Leah Walters meet Jacob Flint, an encounter leading to conflict that will haunt the family throughout World War 1 and beyond.

As Ruth discovers the secrets of Echo Hall, will she be able to bring peace to the Flint family, and in doing so, discover what she really wants and needs?