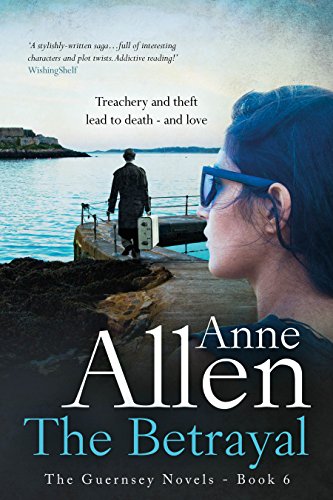 The Betrayal is the sixth in Anne Allen’s Guernsey series but can easily be read as a standalone. I have only read one other, The Family Divided, which is the fourth in the series, but did not feel that not having read the others, or indeed missing out book 5, affected my enjoyment or understanding of this book.

The Betrayal is told over two time periods and I always enjoy stories where past and present connect. In the historical strand during WW2, Guernsey looks likely to become occupied by the Germans and Leo’s wife Teresa and baby daughter Judith are evacuating to safety with her family in Britain.  Leo stays on the island trying to keep his antique business open for as long as possible but all too soon the Germans arrive and life changes for all the islanders. When Teresa returns after the war, she discovers that someone has betrayed Leo and after being deported he has never returned. Also missing is their collection of paintings including a very valuable Renoir.

In the present day story, twins Nigel and Fiona find paintings in basement of the shop they have bought. While Fiona takes the paintings to be assessed and valued, Nigel is found dead in an apparent suicide. Fiona does not believe that her beloved twin would take his life and is determined to convince the police that he has been murdered.

Anne Allen has written about both these time periods in a way which made both stories equally appealing to me. At the heart of the book are the mysteries of what has happened to Leo, to the painting and to Nigel. As a reader, you know that Nigel hasn’t committed suicide so are keen for Fiona to be able to prove her case. Help comes from a rather unlikely source and as the police begin to track down the killer, Fiona may well be in danger too. Towards the end of the book, it all got rather exciting as this part of the story drew to its conclusion! In the past, the story of Leo was equally as intriguing as we try to find out who has betrayed him and why. And then of course, there is the mystery of what binds the two stories together – the painting.

I found this a compelling read as the author brought all the elements of the story together so well. I was really interested to read about Guernsey during the time of occupation and to find out a little about how it affected the islanders. Anne Allen describes her setting so well that it sounds a very appealing place and somewhere I would love to visit some day. The beaches and coves sound beautiful and I get a real sense of the history of the island. I enjoyed the sense of optimism at the end of the novel but without everything being completely and neatly tied up. The Betrayal is a well written novel where the mystery is carefully unravelled by the very likeable and well rounded characters in the novel.

Thanks to the author for my review copy of this book. The Betrayal is available now in paperback and as an ebook. You can order a copy online here: The Betrayal.

Treachery and theft lead to death – and love

1940. Teresa Bichard and her baby are sent by her beloved husband, Leo, to England as the Germans draw closer to Guernsey. Days later they invade…
1942. Leo, of Jewish descent, is betrayed to the Germans and is sent to a concentration camp, never to return.
1945. Teresa returns to find Leo did not survive and the family’s valuable art collection, including a Renoir, is missing. Heartbroken, she returns to England.
2011. Nigel and his twin Fiona, buy a long-established antique shop in Guernsey and during a refit, find a hidden stash of paintings, including what appears to be a Renoir. Days later, Fiona finds Nigel dead, an apparent suicide. Refusing to accept the verdict, a distraught Fiona employs a detective to help her discover the truth…
Searching for the rightful owner of the painting brings Fiona close to someone who opens a chink in her broken heart. Can she answer some crucial questions before laying her brother’s ghost to rest?
Who betrayed Leo?
Who knew about the stolen Renoir?
And are they prepared to kill – again?

4 thoughts on “The Betrayal by Anne Allen #review @anneallen21”