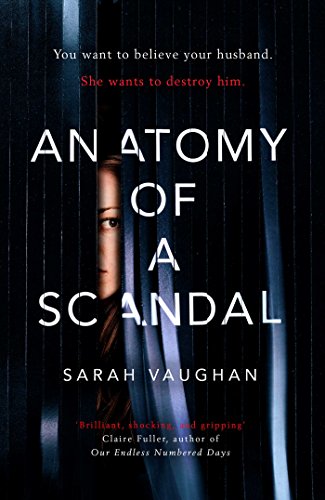 I have read and thoroughly enjoyed both previous books by Sarah Vaughan – you can read my reviews here – The Art of Baking Blind, The Farm at the Edge of the World. In fact The Farm at The Edge of the World was one of my favourite reads in 2016. So I was truly delighted to be offered the opportunity to receive a very advanced copy of her forthcoming novel Anatomy of a Scandal. I knew it was quite a departure from her previous novels being a darker psychological drama, but I’m pleased to say it didn’t disappoint at all and could easily be one of this year’s top reads.

The book follows a high profile court case where well-known and successful politician James Whitehouse has been accused of a serious crime by one of his parliamentary researchers.  His wife Sophie is convinced that James is innocent and wants desperately to protect her young children from the scandal. Kate Woodcroft is the prosecuting barrister. She specialises in these kinds of cases but is perhaps a little too close to this particular case for comfort. As well as following these three characters both in and out the courtroom as the case progresses, the reader learns about James’ time at Oxford University and the privileged lifestyle he led then.

Anatomy of a Scandal is a book which really makes the reader consider all kinds of ethical issues regarding the alleged crime and the courtcase. It would be an excellent book for a book group to read and discuss as it could provoke all kinds of debate about sexual crimes and the difficulty of proving guilt when there is just one person’s word against another. I really felt for the alleged victim Olivia (and other women) on whose behalf Kate was working. The nightmare of going to court and effectively being put on trial themselves was evident. You can certainly see why some women just don’t want to go through it all when they are forced to discuss very private and intimate details about their lives. I can only hope that there are dedicated barristers like Kate out there fighting as hard as they can for justice.

The three main characters are all very convincingly depicted, with none being shown as completely without their faults and weaknesses. My feelings towards them changed throughout the narrative as I veered between sympathy and disgust, understanding and disbelief. At several points I wondered what I would have done in their situations and quite often I honestly wasn’t sure. At times everything seemed very clear-cut, particularly in regard to the court-case, and then another piece of information would be revealed which would muddy the waters. It is a very topical storyline, explored in great depth and you will be thinking about the issues raised long after you have finished the book.

I thought this was a truly outstanding read which deserves to be one of the big successes of 2018. It is beautifully written, as I have come to expect from this author, and utterly compelling.

My thanks to the publishers Simon & Schuster for my copy of the book. It will be published in hardback and as an e-book on 11 January 2018. It is available to pre-order here: Anatomy of Scandal

Sarah Vaughan read English at Oxford and went on to become a journalist. After eleven years at the Guardian working as a news reporter, health correspondent and political correspondent, she started freelancing. Sarah lives near Cambridge with her husband and two small children.

You want to believe your husband. She wants to destroy him.

Gripping psychological drama for fans of Apple Tree Yard, The Good Wife and Notes on a Scandal.

A high-profile marriage thrust into the spotlight. A wife, determined to keep her family safe, must face a prosecutor who believes justice has been a long time coming. A scandal that will rock Westminster. And the women caught at the heart of it.