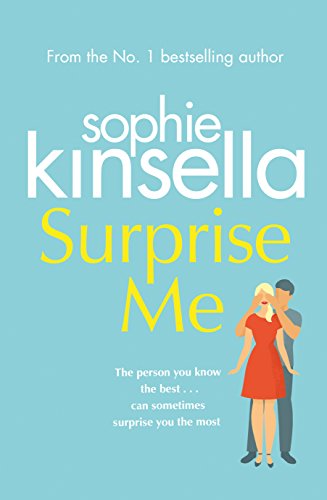 I mostly associate Sophie Kinsella with the Shopaholic books, although I know she has written several standalone novels too. The first in that series was Confessions of a Shopaholic and I have my own confession to make: I haven’t read anything by Sophie Kinsella before – not one book. And going by Surprise Me, I’ve been missing out!

Sophie and Dan have been together for ten years, married for seven, with five year old twin girls. Everything is perfect. They are that couple, the couple who always knows what the other is thinking, can finish each other sentences and rarely have a cross word. At a medical check-up for an insurance policy, the doctor informs them they have every chance of living till they are 100. Rather than this being seen as great news, it rather takes them both aback as they contemplate another 68 years together. In response to the news, they decide that to keep their marriage fresh, they will surprise each other.

As you might imagine, it is when they begin to plan their surprises that things start to go a bit wrong. It doesn’t seem to matter what is planned, nothing quite goes as hoped. This was a part of the book which had me giggling a lot. It was so funny to see quite how wrong some of the surprises turned out to be, either because they didn’t go to plan or because the other person was certainly surprised but not in a good way. There was one particular surprise plan which had me laughing out loud. I’ll just say it involved their neighbour’s son Toby – you’ll know when you get to that part!

But Surprise Me isn’t just about the surprises. Some deeper issues of trust are also explored. Sophie’s late father was a pillar of the community and much respected. He died some years ago in a car crash and Sophie did not cope with the loss of her father very well. Dan had had a tricky relationship with Sophie’s father and she has always felt there was some kind of jealousy on Dan’s part. Now she is wondering if she can trust Dan as she suspects there is something he is keeping from her. Her worries are so well written about that the reader can completely understand her concerns, even though you hope she might be wrong.

I must just mention one of the relatively minor characters, Sophie and Dan’s next door neighbour Professor Russell. He is a quiet yet powerful character who has a lot to teach them about lasting love and what a privilege it is. I found the few scenes he featured in, particularly towards the end of the book, to be very poignant,

Surprise Me is a book which can definitely be described as a really feel-good read.  The author has an engaging style of writing making it easy to read and very entertaining. I thoroughly enjoyed Surprise Me and won’t leave it too long before seeking out another Sophie Kinsella book.

My thanks to Becky Short at PenguinRandomHouse for my copy of the book. Surprise Me was published yesterday by Bantam Press in hardback and as an ebook. It will be available in bookshops or you can order a copy online here: Surprise Me. The paperback will follow in June.

NUMBER ONE BESTSELLING AUTHOR Sophie Kinsella’s emotionally charged, witty new standalone novel about love and long-term relationship survival – and how those we think we know best can sometimes surprise us the most . . .

After being together for ten years, Sylvie and Dan have a comfortable home, fulfilling jobs, beautiful twin girls, and communicate so seamlessly, they finish each other’s sentences. They have a happy marriage and believe they know everything there is to know about each other. Until it’s casually mentioned to them that they could be together for another sixty-eight years… and panic sets in.

They quickly decide to create little surprises for each other, to keep their relationship fresh and fun. But in their pursuit of Project Surprise Me – anything from unexpected gifts to restaurant dates to photo shoots – mishaps arise with disastrous and comical results.

Gradually, the surprises turn to shocking discoveries. And when a scandal from the past is uncovered, they begin to wonder if they ever really knew each other after all…