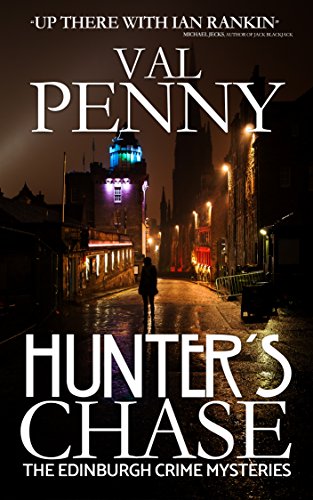 I’m pleased to be helping celebrate the recent release of Hunter’s Chase by Val Penny with a spotlight on the book today. It was published on 2nd February 2018 by Crooked Cat Books and is the first in The Edinburgh Crime Mysteries series. I do love books set in my home town and hope to get around to reading this one sometime soon.

Here’s what the book is about

Hunter by name – Hunter by nature: DI Hunter Wilson will not rest until Edinburgh is safe.

DI Hunter Wilson knows there is a new supply of cocaine flooding his city and he needs to find the source but his attention is transferred to murder when a corpse is discovered in the grounds of a golf course. Shortly after the post-mortem, Hunter witnesses a second murder but that is not the end of the slaughter. With a young woman’s life also hanging in the balance, the last thing Hunter needs is a new man on his team: the son of his nemesis, the former Chief Constable. Hunter’s perseverance and patience are put to the test time after time in this taught crime thriller.

“A gripping debut novel about power, politics and the importance – and danger – of family ties. Hunter Wilson is a compelling new detective and Val Penny is an author to watch.”

Kate Bendelow – author of ‘The Real CSI: A Forensic Handbook for Crime Writers’

“An exciting debut – a police procedural that is refreshing, gripping and witty. I really enjoyed it and can’t wait for the next one.”

“This tartan noire book is a real coffee-cooler. I had three cups of coffee that went cold, forgotten while reading. Val Penny created a cast of characters I want to see in another book as soon as possible.

This is a truly astonishing debut from a writer to watch for the future.

Believable characters, gut-wrenching scenes, and a plot that sizzles along. A taut police procedural that is up there with Ian Rankin, Alex Gray and Quintin Jardine.”

Val Penny is an American author living in SW Scotland. She has two adult daughters of whom she is justly proud and lives with her husband and two cats. She has a Law degree from Edinburgh University and her MSc from Napier University. She has had many jobs including hairdresser, waitress, lawyer, banker, azalea farmer and lecturer. However she has not yet achieved either of her childhood dreams of being a ballet dancer or owning a candy store. Until those dreams come true, she has turned her hand to writing poetry, short stories and novels. Her first crime novel, ‘Hunter’s Chase’ set in Edinburgh, Scotland was published by Crooked Cat Books on 02.02.2018. She is now writing the sequel, ‘Hunter’s Revenge’.