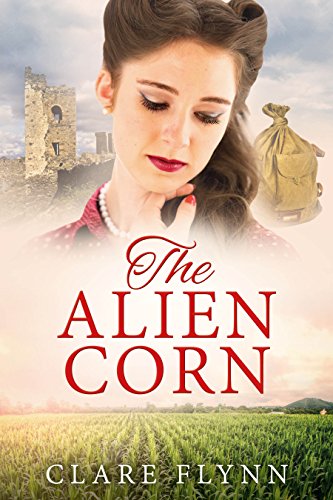 The Alien Corn is a sequel to The Chalky Sea, a book which focuses on Canadian soldier Jim Armstrong and his experiences during WW2. In this second book, the author explores how his English wife Joan and small son adapt when moving to Canada after the war. It has been four years since Joan and Jim saw each other after a very brief relationship resulting in young Jimmy and a hurried marriage.  As well as adapting to a very different life on a relatively isolated farm, Joan has to cope with a mother-in-law who doesn’t seem to like her at all, a sister-in-law who used to be engaged to Jim and a husband who she barely knows.

Although I haven’t read the first book, there was enough back story to fill in any gaps and allow this story to be read as a standalone novel. The story of war bride Joan made me think about my aunt who moved to Canada in the 1960s. She wasn’t a war bride though, she moved with my uncle not long after they married. What must have it been like to take that step into the unknown, not knowing when or if you would see your family again? Clare Flynn explores this through Joan’s experiences and I feel she captured Joan’s concerns perfectly. It was clearly shown how isolated Joan felt. She hardly knew her husband, was moving to a strange land to live a completely different way of life and leaving behind everything she knew and all those she loved. Jim too had been changed by his experiences of war as most soldiers must have been. He had seen his brother die, lost friends and saw and did many things which were almost impossible to forget.

In The Alien Corn, we see two characters begin to come to terms with changes in the wider world and in their smaller more immediate surroundings. They begin to rediscover each other and their feelings for each other in this story which has love at its heart. It’s certainly not an easy path to finding that love and acceptance of each other with plenty of unexpected stumbling blocks along the way.  I must just mention how well I felt Clare Flynn creates her setting on the farm in Canada. I got a real sense of the isolation and the hard work of living on this farm with no electricity and an outside toilet – no fun in the harsh Canadian winters! The author has written a really engaging story which I thoroughly enjoyed. I am hoping that there might be a third book in the series where we find out more about how life works out for Jim and Joan in Canada.

My thanks to the author for my copy of her book. The Alien Corn was published on and you can order a copy online here: The Alien Corn

They faced up to the challenges of war – but can they deal with the troubles of peace?
Canadian, Jim Armstrong, married in haste during the second world war, after a one-night stand. When his wife and their small son join him in Canada it’s four years since they’ve seen each other.

War bride, Joan discovers Jim has no intention of the family returning to England. She struggles to adapt to life on a remote farm in Ontario, far from her family and cold-shouldered by Jim’s mother.

Jim, haunted by his wartime experiences in Italy, lingering feelings for a former lover, and the demands of the farm, begins to doubt his love for Joan.

From the rolling farmland of Ontario to the ravaged landscapes of war-torn Italy, this sweeping love story is the sequel to The Chalky Sea.

2 thoughts on “The Alien Corn by Clare Flynn #review @clarefly”